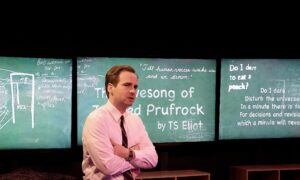 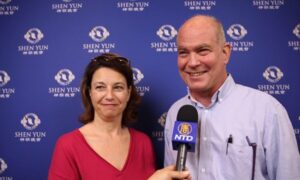 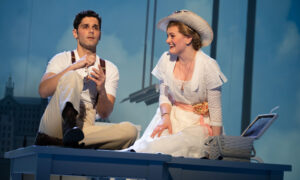 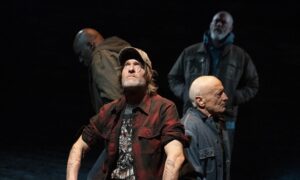 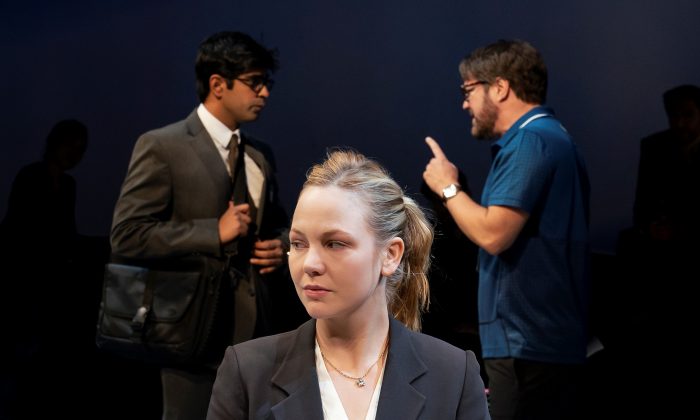 NEW YORK—Are people shaped innately or are their outlooks on life shaped by their experiences, beginning from the moment of birth, before they are even consciously aware of their surroundings? For that matter, what exactly is consciousness? Is it the ability to move from theory to fact via impulse, inspiration, and/or the pulling together of dozens of variables?

These are the questions that form the crux of Tom Stoppard’s 2015 play, “The Hard Problem,” making its Off-Broadway debut at Lincoln Center’s Mitzi E. Newhouse Theater.

The title of this play is used by those who actively study the consciousness issue. Hilary (Adelaide Clemens), a college senior with a major in psychology, is on the fast track for a place in the world of scientific research. She also believes that people are inherently good.

Her viewpoint is diametrically opposed to that of her academic tutor and potential lover Spike (Chris O’Shea). Spike believes in the principles of evolution and natural progression when it comes to how people and their worldviews are formed. The two debate a classic case on the subject as the play begins.

Hilary’s theories on consciousness and altruism result in her being offered a position at the prestigious Krohl Institute for Brain Science. Her actual job interview, which requires her to think on her feet, piques the interest of Dr. Leo Reinhart (Robert Petkoff), who clearly sees possibilities in her.

Jerry (Jon Tenney), the Krohl’s mercurial founder, is more interested in developing hypotheses that can lead to financial windfalls—such as being able to analyze and predict the practice of risk-taking. He’s particularly interested in applying predictions to business, where possibilities and probabilities can be distilled in such a way as to indicate exactly the right time to buy or sell anything of value.

As time goes on, with no major breakthrough made or papers published, Hilary finds both herself and her department on the chopping block. At least until a new study, one looking at whether children are motivated by altruism or self-interest, yields some unexpected and exciting results. The project is supervised by Bo (Karoline Xu), a recent addition to Leo’s team.
However, when it’s revealed that the study did not follow established protocols to ensure impartiality, everything gets called into question.

There are certainly enough elements in “The Hard Problem” to make for a fascinating play. Unfortunately, Stoppard takes all possibilities present and never goes far enough to make any of them completely engaging. (Though Krohl’s interview process that Hilary and another applicant, Amal (Eshan Bajpay), go through proves to be especially amusing.)

The show does offer several possible examples of true altruistic behavior, through none become involving enough to have a lasting emotional impact.

Stoppard also gets too caught up in trying to add the human element to his postulations. Hilary, for example, has a great personal tragedy in her past and is still dealing with the ramifications of that event. There are also explorations of the relationships between the characters, particularly on the subject of unrequited love.

Yet we often get the feeling of being kept at arm’s length when watching the performances, because we are told certain information rather than actually seeing it unfold on stage.

Tenney does a very nice job as Jerry, a fellow who can be amiable one minute and explosively vent his frustrations the next. He’s someone you always have to be walking on eggshells around.

Petkoff works well as Leo. The character pushes those he works with to look inside themselves for answers and is also quite professional and deeply loyal to those he cares about.

Jack O’Brien’s direction keeps the show moving well enough, but neither he nor the cast, for that matter, is able to make the work rise above the problems inherent in the script.