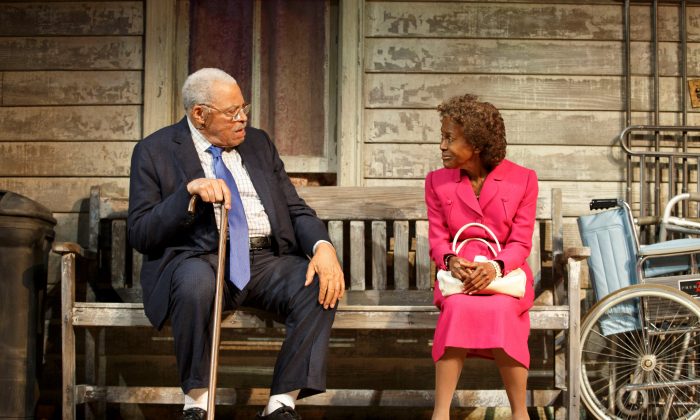 When life deals the hand you play
By Judd Hollander

NEW YORK—James Earl Jones and Cicely Tyson are the stars and also the entire cast of the glittering Broadway revival of D.L. Coburn’s 1976 comedic play “The Gin Game.” The work shows there are still some surprises to be found in life, even if you’re getting close to the end of the road.

It’s visiting day at the Bentley home for the aged and neither long-time resident Weller Martin (Jones) nor the newly arrived Fonsia Dorsey (Tyson) has anyone coming by to see them. Both are long since divorced with children grown and gone.

With not much else to do, Fonsia accepts Weller’s offer to play a couple of hands of gin rummy. It’s a card game she’s never played and one at which Weller claims he is an old hand.

Not only does Fonsia take to the game like a fish to water, but she also starts winning hand after hand after hand. Her good luck creates growing annoyance in Weller—which eventually crescendos into both frightening and humorous moments.

Weller drives Fonsia away with his flights of anger but then coaxes and pleads with her to come back to the table. Weller’s purpose is not only to engage Fonsia for another rematch, but also to retain her company: She’s probably the only person who would put up with his garrulous manner. In fact, both are rather lonely for companionship, though neither mentions it.

In between the laying down and dealing of the cards, the audience is offered a glimpse into who these people are. Fonsia, for example, has had a bit of bad luck when it comes to men, while Weller is revealed to be not as smart as he thinks he is.

More than once, Weller reminds one of a schoolyard bully who screams and rages about the most inconsequential matters when things don’t go his way. Although Weller is capable of a tender gesture now and again, such moments are usually on his own terms. In fact, the relationship between Weller and Fonsia at points resembles an abuser and enabler.

How many of us really make an effort to be someone people would want to pay their respects to?

Then again, Fonsia is no angel and is perhaps a bit too pious and unyielding for her own good. She, as is Weller, is an expert in the art of denial when matters strike too close to home.

Coburn has a crafted an enjoyable tale, and the actors deliver their lines with perfect pregnant pauses and slow burning moments. As Weller cynically notes at one point, “I have one of the most advanced cases of old age in the history of medical science. The mortality rate’s incredible.”

Between the moments of levity, the show also works in some serious aspects concerning the aged, those who are supposed to be taking care of them, and those who put them in such homes to begin with.

Weller’s remark about how many of Ty Cobb’s former teammates came to his funeral is also quite telling. Don’t we all want to be mourned when we pass away?  Yet, especially in the fast-paced world in which we live today, how many of us really make an effort to be someone people would want to pay their respects to when the time comes?

In this respect, this play could have easily been written last year, instead of almost three decades ago.

Best of all is the way Jones and Tyson beautifully play off each other. Their characters come across as two rather set-in-their-ways folks. Each is realistic enough to accept how their lives have turned out, but neither is willing to let the other roll all over him or her.

This play could have easily been written last year, instead of almost three decades ago.

An emotional highlight of the show is a dance sequence between Jones and Tyson. The scene offers a brief glimpse into the myriad of possibilities that could still be open to each of these characters should they wish to take those steps.

Whether Fonsia and Weller will actually be wiser or more accepting after what they’ve experienced is open to question; the older we get, the more resistant to change we usually become.

The tension in the story rises and falls throughout as Leonard Foglia directs the proceedings with a subtle touch, letting the two stars (both of whom deserve Tony nominations for their performances) take command of the piece. Yet Foglia never lets the actors or their personalities overwhelm the characters.

Riccardo Hernandez’s set of the back porch of the Bentley home—one filled with clutter and junk—works well. Jones often flings stuff around with abandon whenever the spirit moves him. Also very good is the lighting design by Jules Fisher and Peggy Eisenhauer, the effect nicely expressing the feeling of time passing.

With two old pros holding court, “The Gin Game” is one of the best evenings in theater I’ve had in a long time.