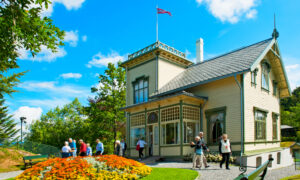 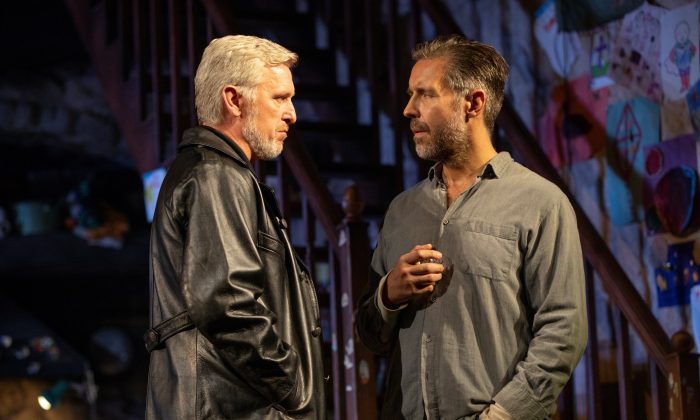 IRA representative Muldoon (Stuart Graham) visits Quinn Carney (Paddy Considine) to see how the Carneys are taking the news that the body of Seamus Carney has been found, in the riveting drama "The Ferryman." (Joan Marcus)
Performing Arts

Where justice is an illusive term
By Judd Hollander
biggersmaller
Print

NEW YORK—There are many things passed from one generation to the next, though when prejudice and hatred are among them, tragedy results. Jez Butterworth’s riveting drama, “The Ferryman,” now on Broadway, asks us to revisit a time of deep turmoil between Ireland and England, with this point in mind.

In 1981 Northern Ireland, Quinn Carney (Paddy Considine) and his wife, Mary (Genevieve O’Reilly), live on the family farm in County Armagh, along with their seven children and assorted relatives. Despite their relatively isolated location, “The Troubles” plaguing the country are never far away.

At the moment, several imprisoned members of the Irish Republican Army (IRA) are on a hunger strike in an attempt to force the British government to grant them political status. This situation is followed with a deep fervor by the family’s aged Aunt Pat (Dearbhla Molloy). She has a long-standing hatred for the British, dating back to the death of her brother during the 1916 Easter Rising.

The most troubling news for the family, however, stems from the recent discovery of the body of Quinn’s younger brother, Seamus. A former IRA member, Seamus disappeared 10 years earlier, leaving behind a wife, Caitlin (Laura Donnelly), and young son, Oisin (Rob Malone). The two have lived at the Carney farm ever since.

In fact, Caitlin has become the de facto mother to the clan. Mary stepped back from that role due to the effects of a supposed, long-term “virus.” Quinn and Caitlin’s long-developing friendship causes an undercurrent of tension with others in the family.

What concerns the IRA, as personified by Muldoon (Stuart Graham), who has arrived from the nearby city of Derry, is how Seamus’s death will be perceived by the Carneys and, through them, the public at large. Rumors as to what happened to Seamus arose almost from the moment he disappeared, and the IRA does not want any negative publicity on the matter—especially now, as public sympathy is on the organization’s side, due to the hunger strike.

Director Sam Mendes has a firm grasp on the text and allows the tale to unfold at a genial pace, while enabling the humor in the story, along with a bit of dancing and singing, to briefly push more serious issues to the back burner though they are always present. We see, for example, moments of unease in Mary whenever she sees Caitlin and Quinn together.

Justice is a word that crops up quite often in the play. Yet the idea of justice, the redemption it can bring and the lessons it can teach, is illusive here. Its effectiveness depends on who is delivering it and under what circumstances. Muldoon, for example, is regarded as a hero by Aunt Pat and many of the youngsters in the Carney clan, along with their nephews, the Corcorans.

But Quinn and Caitlin, who know Muldoon is responsible for killings and bombings in the name of what he calls justice, see him quite differently.

With justice looking different depending on one’s experiences, the story is a warning against blindly following a cause. Many of the characters who were initially lured in by the romance of the Irish struggle (that is, Quinn, Seamus, Aunt Pat, her late brother, and so on) were not thinking in their youth of what that struggle entails: death, bombings, and innocents being caught in the crossfire. It’s only when they have seen firsthand the effects of the Irish struggle that the romance fades away.

Yet the blindness affects the next generation, as shown when the little Carney girls ask why Tom Kettle (Justin Edwards), a slow-witted fellow taken in by Quinn’s father years earlier, wasn’t shot on sight. He’s English, after all. Ironically, Tom turns out to be the only completely innocent character in the play, and yet the one most targeted by those engaged in a struggle that does not involve him.

Among the standouts in this uniformly perfect cast is that Edwards’s portrayal of Tom is poignant, especially when he makes a heartfelt declaration.

Fionnula Flanagan is the elderly Aunt Maggie Far Away. She is so called because she suffers from dementia, with only brief periods of lucidity. When they do occur, the Carney women gather around to soak up her tales of the past, along with any of her words of wisdom.

Quite affecting is Aunt Maggie’s relationship with her husband, Patrick (Mark Lambert), the rogue of the family, with a perennial twinkle in his eye and witticism on his tongue.

Also excellent is Graham as the quiet, yet ever-threatening Muldoon. He leaves no doubt he would kill you in an instant should he deem it necessary.

Considine, Donnelly, and O’Reilly are all quite good in their various roles, the three playing off each other perfectly in their scenes together.

Design of the show by Rob Howell is spot-on. The Carney home gives off a lived-in and homey presence. The sound design by Nick Powell is also very good.

Brilliantly presented and wonderfully executed, “The Ferryman” (a reference to the mythological character who transports the recently deceased to the land of the dead) offers a stark reminder of how actions from the past continue to be felt. And only those who can see through them are finally able to break the cycle of violence.