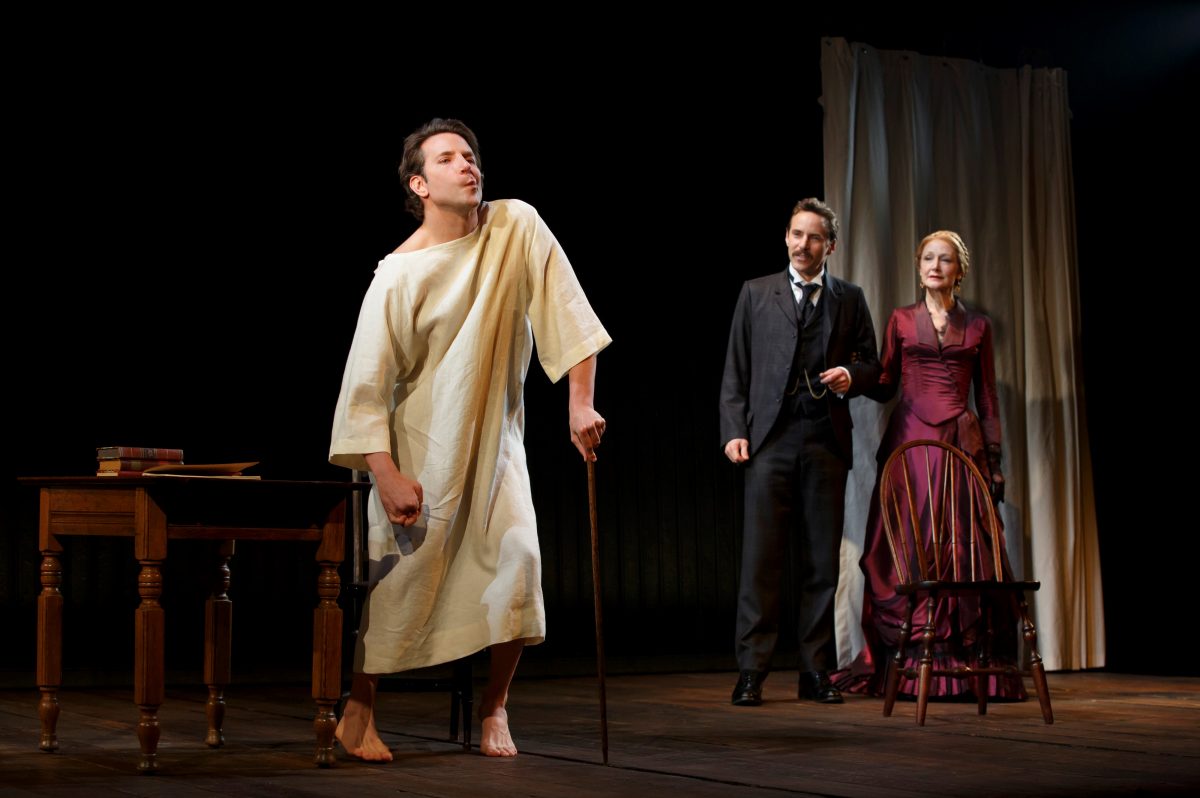 NEW YORK—The need to make others happy and the importance of following society’s rules are at the heart of Bernard Pomerance’s “The Elephant Man.” Based on actual events, the play gets a top-notch revival at Broadway’s Booth Theatre.

In 1884 Dr. Fredrik Treves (Alessandro Nivola) of the London Hospital chances upon a sideshow exhibition featuring John Merrick (Bradley Cooper), also known as the Elephant Man due to his severely deformed face and body. Treves first takes him to the London for an examination and presentation to his colleagues, and then comes to his rescue years later when an angry mob wants to tear Merrick to pieces, so incensed are they by his appearance.

Brought back to the hospital by Treves, and thanks to a letter to the Times by Treves’s superior Carr Gomm (Henry Stram), enough donations are received to enable Merrick to stay at the London for the rest of his life.

Treves also takes it upon himself to introduce Merrick to people with whom he can converse, Merrick being very intelligent. He has a rueful sense of humor borne from his experiences. Listen for a line about “saving the lunch” in that regard.

Thanks to Treves’ persistence, and with the help of actress Mrs. Kendal (Patricia Clarkson), who introduces him to the top echelons of society, Merrick finds himself awash with visitors. However as time goes on Merrick begins to notice a series of unspoken rules and boundaries. These he’s expected to abide, even if he may not understand them.

An interesting point in the play occurs when it becomes evident that everyone spending any length of time with Merrick comes away with the impression he’s just like them. Treves begins to wonder if Merrick, whose intellect and artistic sense has already been established, is simply telling his visitors what they want to hear in an effort to be liked. This question forces the audience to reexamine what they have seen up to that point.

Strong direction by Scott Ellis, coupled with the efforts of an excellent cast, powerfully rams the story home. So strong are the early scenes with Cooper, wearing a facial covering to hide his features at that point, and so memorable are the slides of actual photos of Merrick’s appearance that, when the actor’s headdress is torn off, one fully expects to see those same disfiguring features, forgetting for the moment that Cooper wears no makeup. Instead he morphs into character via the use of facial and body contortions.

Additionally, several later key scenes are so full of emotion and intimacy that one can hear a pin drop when they’re being performed.
Cooper is brilliant as Merrick, portraying him as a caring soul with a keen intellect that belies his misshapen body. He also has an almost childlike inquisitiveness about him, demonstrated by his continual questions when he finds himself indirectly responsible for the dismissal of someone at the hospital.

Nivola is excellent as Treves, someone open and idealistic when first seen, who becomes more closed and cynical as time goes on. The character is hamstrung by the era’s moral codes on sex and propriety, while at the same time trying to deal with the intense suffering he sees on a daily basis. Nivola does a masterful job in showing Treves’s inner struggles as he attempts to navigate these extremes.

Stram is good as the no-nonsense Gomm. He’s a person who knows all too well how the world works. His early line about consolation turns out to be quite true in the end.

Anthony Heald does well as Bishop How, who believes he’s found a kindred soul in Merrick. The Bishop, like so many others, is trapped by the guidelines of polite society and thus is unable to help Treves when the latter has a crisis of faith.

Heald also nicely brings off Ross, the man who made Merrick a circus attraction and who later abandons him, only to return sometime later wondering if Merrick’s new situation is simply a case of exchanging one cage for another.

Clarkson works perfectly as Mrs. Kendal. The character has a quiet air about her, as well as some of the funniest lines in the play. Trained to play a variety of roles, Mrs. Kendal finds herself unexpectedly drawn to Merrick, eventually achieving a deep friendship with this man who comes to see her as a confidant, even as she finds herself getting in deeper than she ever imagined.

Timothy R. Mackabee’s set is sparse, yet still full enough to create the required illusions, ranging from Merrick’s quarters in the hospital to a railway station where Merrick is forced to take refuge from an angry crowd. Costumes by Clint Ramos have a simple and somewhat severe look that fit in well with the story.

A stirring tale about the dangers of feeling too much and questioning too closely, “The Elephant Man” offers an insightful look at what being human really means.