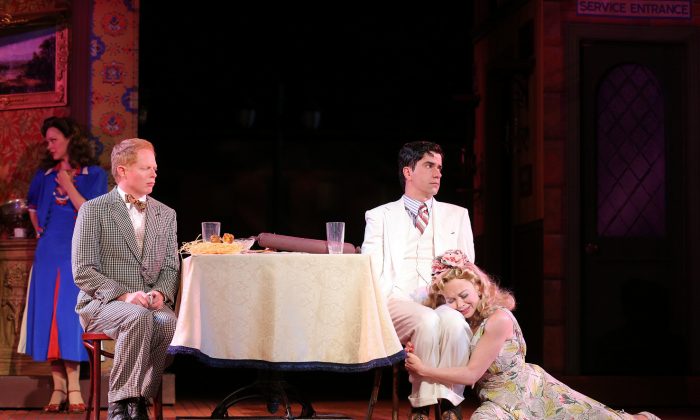 Theater Review: ‘The Comedy of Errors’

NEW YORK—The Public Theater and director Daniel Sullivan go the cartoon route in their rather amusing presentation of William Shakespeare’s The Comedy of Errors, as this year’s first summer offering of free Shakespeare in Central Park.

The ancient cities of Ephesus and Syracuse have long been in conflict, with anyone from Syracuse daring to enter Ephesus being condemned to death. This fate faces Syracuse merchant Egeon (Jonathan Hadary), who has been ordered executed by the Duke of Ephesus (Skipp Sudduth).

Given the opportunity to tell his story, Egeon relates how on a sea voyage many years earlier he, his wife (Becky Ann Baker), their infant twin sons, both named Antipholus (Hamish Linklater), and twin companions to their sons, both named Dromio (Jesse Tyler Ferguson), were caught in a storm and shipwreck. Egeon and one of each of the twins were saved by one rescue vessel, while his wife and the other twins were rescued by a second. Neither group ever knew the fate of the other.

The now grown Antipholus raised by Egeon has since left Syracuse with his servant Dromio to search for his twin. At the same time, Egeon, eventually growing concerned about the son he raised, left Syracuse to look for him.

Meanwhile Antipholus and Dromio arrive in Ephesus to find themselves greeted with a strange familiarity by almost everyone they meet. It seems their long lost twins are actually residents in the city, which leads to some rather comic misunderstandings.

These misunderstandings include Adrianna (Emily Bergl), wife to Antipholus in Ephesus and her sister Luciana (Heidi Schreck)—who the Antipholus from Syracuse finds himself falling for.

Add to this the fact that neither the Antipholus nor Dromio twins recognize one another, and it’s not long before the entire town believes Antipholus has gone mad.

Generally regarded as the shortest play in the Shakespeare canon, bits of business have been tossed in to help the show fill out the time. They consist of a talented ensemble performing various jazz dances, both in the prologue and as transitions between scenes. These dances provide a nice diversion on the one hand and also help set the atmosphere of Ephesus as a sort of wide-open town where mischief abounds.

Work by both dance captain Bryan Langlitz and fight captain Tyler Caffall must be commended. The dancing is quite lively and the physical assaults combine with a comedic edge, so there’s never a sense of danger, but rather a question of how what’s unfolding will eventually be straightened out.

Definitely taking the full-on comedic route, with Bergl and Linklater going over the top at times, (Linklater does a hilarious encapsulation of the entire plot at one point), director Sullivan wisely has all the performers play their roles perfectly straight. This choice makes the various situations that much funnier.

Linklater does some nice comic slow burns. Ferguson excels in the physical comedy area, he often being on the receiving end of Antipholus’s wrath, whichever Antipholus it may happen to be.

The show’s setting meanwhile has been moved to a small town in upstate New York sometime during the jazz era, with the accents varying from Jewish to Italian to Brooklyn.

Unfortunately, the show is so comically driven it’s never really grounded in reality. As a result, it’s hard to care about the characters involved, none of whom feel anything close to three-dimensional.

At the same time, there is also a sort of amateur feeling to the proceedings, with sets that really don’t stand out particularly well. Similarly, some props really aren’t needed. It might have been better to trust the source material and not try to add a few too many flourishes just for the sake of doing so.

The entire company is enjoyable to watch, with Linklater and Ferguson both having a great sense of comic timing while playing off of each other. However, they really aren’t able to make their respective twins stand out from one another.

Bergl is a lot of fun as Adriana, as is Schreck as her sister, the two making some definitely un-politically correct comments regarding the state of matrimony, but neither has as big a role in the show as one might wish.

An enjoyable diversion, The Comedy of Errors will leave a smile on your face with a production that certainly lives up to its title—though the show is rather heavy on style and light on substance.