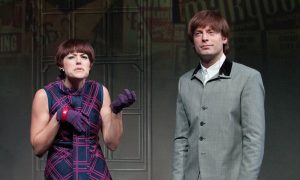 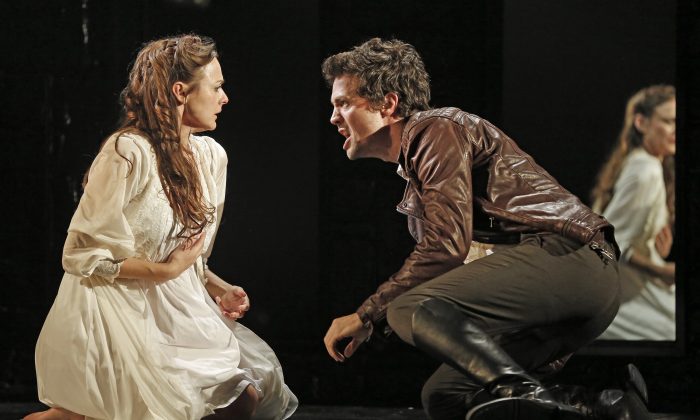 NEW YORK—It’s been said that tragedy and comedy are two sides of the same coin, and that a given situation can appear hilarious in one interpretation, while tragic in another. Such is the case with Red Bull Theater’s production of Thomas Middleton and William Rowley’s rarely performed 1622 Jacobean work, “The Changeling,” currently presented off-Broadway at the Lucille Lortel Theatre.

In the port city of Alicante, Spain, the young nobleman Alsemero (Christian Coulson) has fallen in love with Beatrice-Joanna (Sara Topham), the beautiful daughter of Vermandero (Sam Tsoutsouvas). She quite happily reciprocates the feelings.

Unfortunately, her father has already promised her to Alonzo (John Skelley), a nobleman and somewhat officious fellow.

Alonzo is also clearly besotted with Beatrice, despite warnings from his brother, Tomazo (Paul Niebanck). Without his eyes clouded by passion, Tomazo sees Beatrice as she truly is—a beautiful, calculating, and at times rather cold individual.

Tomazo’s observations are confirmed by Beatrice’s dismissive treatment of the family’s loyal and somewhat disfigured servant, De Flores (Manoel Felciano). Beatrice abhors the very sight of De Flores, even as he clearly loves her himself.

Determined to make Alsemero her husband, Beatrice takes full advantage of De Flores’s desire for her, inducing him to kill Alonzo. However, once that deed is done, Beatrice finds she simply can’t go live a life of happily ever after—at least not before paying a very steep price. The price grows continually more expensive as factors keep cropping up that threaten to expose her past actions.

A stern morality play, “The Changeling” takes the stance that once one starts down a path of deception and evil, one cannot avoid answering for those sins, no matter how laudable the motives might have been. True love is not an excuse for sinning.

The point is made that love can blind one to the truth. Just as Alonzo disregards his brother’s warnings, Alsemero ignores comments from his own friend Jasperino (Justin Blanchard) concerning Beatrice. Similarly, the actions of both De Flores and Beatrice are based on the idea of blind love, so that they fail to recognize the wrongness of their actions, at least initially.

That one cannot avoid answering for sins proves true both for Beatrice and De Flores, as well as for Franciscus (Philippe Bowgen) and Antonio (Bill Army), who are involved in the play’s subplot.

The two men feign insanity in order to be thrown into a madhouse where they can woo the beautiful Isabella (Michelle Beck). She is kept there by her much older husband, Albius (Christopher McCann), a physician, for fear she will take up with another man.

This second storyline runs parallel to the first as well as adding rather biting commentary on the conditions of such facilities at the time. This point is emphasized through the actions of Lollio (Andrew Weems), a servant of the doctor and keeper at the madhouse, where people are segregated into groups of fools and madmen.

The madhouse scenes serve as an example of the close linkage between tragedy and comedy. Played mostly for laughs in this production, with conversations between Lollio and Antonio clearly echoing dialogue from Shakespeare’s “King Lear” (“Lear” pre-dates “The Changeling” by about 14 years), this writer remembers seeing a version of “The Changeling” in which a major scene at the hospital was presented in a quite dark and stomach-churning manner.

Sadly these two stories, which eventually dovetail in an overly convenient way, never mesh well. Each takes too much time from the other with only Topham and Felciano given enough stage time to make their characters resonate.

Much of the problem lies in Jesse Berger’s direction, which is unable to remove the feeling of disconnectedness. This disjointedness translates into the audience not knowing whether to cringe or laugh at certain points. During a particularly grisly piece of business involving a ring, the scene provokes laughs from some members of the audience and gasps from others.

It should be noted that Berger’s work is much stronger in the Beatrice storyline. Those sequences show powerfully from what great heights people can fall.

Berger demonstrates another nice touch with the opening sequences of both the first and second acts. The entire cast dances with one another before splintering apart to places they may not want to be. It’s almost as if Berger—and the play itself—are saying we are all pawns in a much bigger game, where one person’s actions are determined by the actions of someone else and so on unto infinity.

For all its faults, the production remains thought-provoking with good performances. For students of Jacobean drama, it’s definitely worth a look.

Also in the cast is Kimiye Corwin.

Judd Hollander is a member of Drama Desk and reviewer for stagebuzz.com