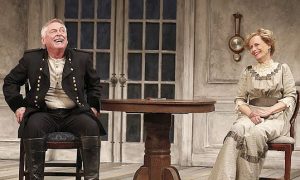 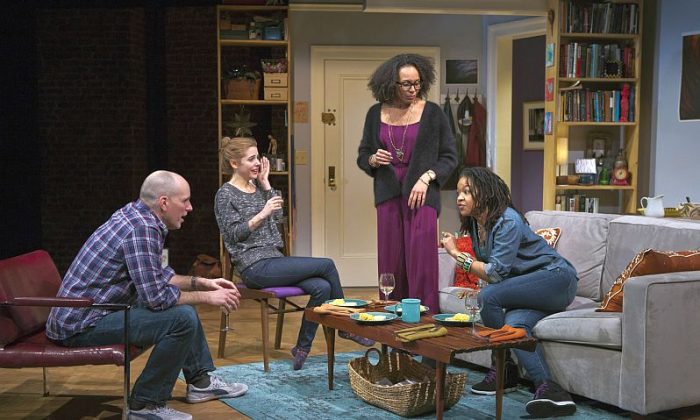 Is adopting the right thing to do?
By Judd Hollander
biggersmaller
Print

NEW YORK—Playwright Tanya Barfield offers a surprisingly intimate drama about race relations, motherhood, and the concept of extended family with her work “The Call,” presented by Playwrights Horizons and Primary Stages.

In a present-day American city, Annie (Kerry Butler) and Peter (Kelly AuCoin), a white, late-20/early-30-something couple, have decided to adopt a little girl. For several years they vainly tried to conceive on their own, a process that included numerous rounds of fertility treatments and several miscarriages.

It’s a decision that pleases their African-American friends Rebecca (Eisa Davis) and Drea (Crystal A. Dickinson). The four are all artists, with Annie, Peter, and Rebecca having a long history together. Annie and Rebecca were roommates in college, and Peter went on a trip to Africa with Rebecca’s late brother David. David’s death is an unspoken issue between the two.

After initially planning to go the American route to adopt, Annie feels they should adopt a child from Africa instead. However, this decision raises questions of exactly how the child will be brought up. The questions have an underlying racial tone concerning everything from how to comb her hair to what her name will be—not to mention how she will react when teased by other children without understanding why.

As these discussions go on, cracks begin to appear in the foursome’s friendship. Annie and Peter’s marriage also begins to fracture as they wonder whether the adoption will actually happen.

Another issue is the matter of the child’s age. Annie and Peter want an infant so they can experience the complete spectrum of parenthood. But the child they may eventually get is supposedly 2 1/2 yet looks at least 4 in the photo they receive.

The issue at the heart of “The Call,” the title referring to a telephone conversation Peter has regarding the adoption, is how much of this choice comes down to what the parents want and how much is about what’s best for the child in question.

Annie and Peter have gone through years of hell trying to have children. Do they then have the right to decide how old a child they wish to adopt should be and where she should come from? This is especially so after going through a lengthy preparatory period in anticipation of their new arrival, including setting up a crib and creating a nursery, only to see the plans suddenly altered through no fault of their own.

Butler is excellent as Annie, a young woman beaten and battered from the emotional turmoil of the last few years. She has a great desire to be a mother and a firm definition of what that entails fixed in her mind. Yet she finds herself facing endless self-doubts as to the entire process as things keep changing right before her eyes.

AuCoin is fine as her stalwart husband, someone who loves Annie dearly but who, like her, may be finally reaching an emotional breaking point. Interestingly, Peter was initially hesitant about adopting a child from Africa despites Annie’s certainty, but later he becomes the one to push for them to take the child even as Annie starts to waiver.

Davis and Dickinson are good as Rebecca and Drea, playing off each other nicely, as well as strongly interacting with Butler and AuCoin.

The playwright also does a good job in having these four characters do their best to navigate the racial waters. At times they have to clarify what they see as innocent remarks among friends, but which may offend without meaning to.

Rounding out the cast is Russell G. Jones, playing Alemu, Peter and Annie’s new African neighbor. He seems to have a vested interest in whether the two actually adopt a child from his homeland.

Unfortunately, the play comes apart in the final scenes that seek to wrap things up too neatly. This occurs in terms of the actual ending, which feels somewhat tacked on, and also in dealing with old wounds and hidden issues among the four friends. These finally erupt and are just as quickly dropped.

Leigh Silverman’s direction is sound in moving the show at a slow and deliberate pace so that events unfold naturally, as if waiting for the proper time to detonate each of the emotional bombs that are sprinkled throughout the various conversations—at least until the aforementioned problems with the ending.

Lighting by Matt Frey is fine, and the sets by Rachel Hauck are appropriate to the characters and setting presented.

Despite the problems with the denouement, there is much to admire about “The Call.” It is a tale of two desperate people trying to realize their dream of having a family and ultimately realizing that the only thing standing in the way of that dream is themselves.