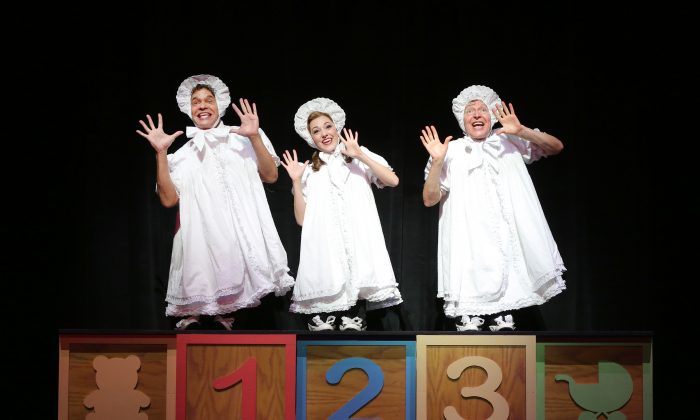 Its book was written by Douglas Carter Beane from the screenplay by Betty Comden and Adolph Green. The music was composed by Arthur Schwartz and Howard Dietz, based on the classic MGM film, produced by special arrangement with Warner Brothers Theatre Ventures.

Former Broadway star and Hollywood icon Tony Hunter (Brian Stokes Mitchell), his career foundering of late, has returned to New York at the request of flamboyant director/actor Jeffrey Cordova (Tony Sheldon) to do a play. Though upon his arrival, Tony learns that not only does Jeffrey want him to do a musical, he also wants husband and wife team Lilly and Lester Martin (Tracey Ullman, Michael McKean) to create the show’s libretto and score.

Lilly was Tony’s former lover who still has feelings for him, as Lester is all too aware. Lilly and Tony’s relationship and the trio’s friendship, had come to an abrupt end 15 years earlier when Tony left for California.

For the show-within-a-show scenario, Lilly and Lester come up with a take on an old Damon Runyon story. A New York shoeshine boy—to be played by Tony—brags about being a wealthy big shot to his girlfriend back in Louisiana. When she announces she’s arriving for a visit, one of his wealthy customers, upon learning of his plight, schemes to make the young man’s lies seem true. Complications arise when the girlfriend unexpectedly becomes the toast of New York high society.

Unfortunately Jeffrey, a fellow with delusions of grandeur, sees the vehicle as a modern day take on Faust where a young man sells his soul to the devil. It’s a viewpoint shared by Paul Byrd (Michael Berresse), the cutting edge, avant-garde choreographer brought in to stage the dances for the show.

However, when an out-of-town tryout is an unqualified disaster, Tony takes control of the production in an attempt to get things back on track. Further complicating matters is the fact he’s falling for Paul’s girlfriend Gabrielle Gerard (Laura Osnes), who’s also the show’s leading lady.

The Band Wagon is simply a love letter to theater. The show is filled with inside jokes and gentle ribbing. (“New Haven, Boston, Philadelphia—that’s why our forefathers founded these cities—to try out shows for New York”).

Beane has also done a very good job with the book, giving at least passable plot reasons for various numbers being used in the show—not the case with the 1953 film.

The story also has a kind of “let’s put on a show” feel to it. There’s even a reference to Mickey Rooney and Judy Garland tossed in, coupled with a gentle moral lesson about the importance of friendship and love. The show imparts all this without ever treating itself too seriously.

Mitchell, who has been absent from Broadway for far too long, makes a welcome return as the somewhat cynical, somewhat desperate Tony who sees a Broadway show as a means for getting back on top, only to learn the value of helping others along with the way. He also nicely handles the jaunty “A Brand New Suit,” the very funny “When You’re Far Away from New York Town,” and the ballad “By Myself.”

Ullman works beautifully as Lily. In addition to being a strong singer and having superb comic timing, she also gets in some nice moments of romantic angst while trying to come to terms with her past relationship with Tony. She has good chemistry with Michael McKean, who does a very nice job as her more somber and jealous husband.

Sheldon is a sheer delight as the deliciously over the top Jeffrey, tossing out caustic comments and chewing scenery with abandon. An oversized personality with the best lines in the play (such as the advantage of working with writers who’ve been dead for 400 years), the actor has great fun with the role. He’s a character who, like Tony, also learns the value of humility and trusting in others.

Osnes is excellent as Gabrielle, having a lovely singing voice while making the character feel both fresh-faced and appealing. Her scenes with Mitchell are very good. The two characters also deal with their age difference—a minor plot point in the piece—head on.

Kathleen Marshall’s directorial and choreographic work are wonderful, particularly the latter with some fantastic moments during the ensemble numbers. She also does a good job in keeping the characters firmly grounded in the reality of the situation created. This rule applies even to Sheldon’s performance which, while outrageous at times, never goes over the line into outright parody.

The Encores! orchestra, here under the very able baton of guest music director and conductor Todd Ellison, is simply wonderful to hear.

Probably the best thing about The Band Wagon is that the show offers the audience a good time. As mentioned at one point, “musical comedy is fun” and in this case, it certainly is.  Plus with such an iconic show business song as “That’s Entertainment” as part of the mix, who could ask for anything more?