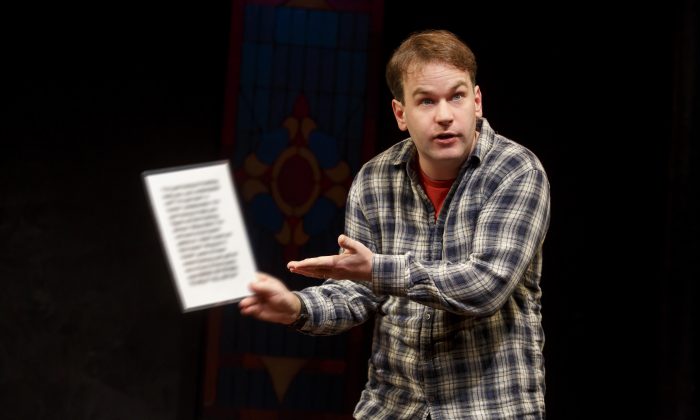 Humor is definitely the best medicine
By Judd Hollander

NEW YORK—Few show titles better reflect their subject matter than Mike Birbiglia’s one-person effort, “Thank God for Jokes,” running at the Lynn Redgrave Theater through May 29. The self-deprecating comedian offers a gentle and pointed lesson on the importance of humor, while proving that the joke itself is not nearly as important as the circumstances in which it is presented.

For example, no one likes to be reminded by their boss that they were late to work, much less reprimanded for it in front of the entire office. Yet if someone “happens” to be talking about people who have a habit of being chronically late when, just at that point, latecomers come into the theater, and Birbiglia personally welcomes them before going off on a 15-minute riff on the subject—then it is funny. Hopefully even to those being singled out.

Most jokes will probably offend somebody, somewhere, at some point.

Birbiglia examines the idea of what and when something is funny in other situations as well, including sexual insinuations and the use of four-letter words. The latter are something Birbiglia tries to avoid.

Birbiglia makes clear that most jokes will probably offend somebody, somewhere, at some point. It might be wiser, then, to refrain from telling jokes about Jesus at a Christian college, getting into a discussion about nut allergies on an airplane flight, or trying to deal with a police officer when you’re driving with a suspended license.

But as Birbiglia points out, jokes are important because they tell your side of the story. Each of the tales he relates is brilliantly crafted into a humorous narrative. Sometimes he happens to be the butt of the particular payoff, and sometimes he just gives his own perspective on a situation that occurred.

He also brings up that the need to be politically correct (though he doesn’t use that exact term) came about because when people were offended about one thing or another, the standard excuse to those upset was “I was just joking.” The offending parties did not do enough to alleviate hurt sensibilities.

The result has been a wide variety of societal rules and regulations over what is and is not considered acceptable. The Charlie Hebdo killings, which Birbiglia references during his performance, is an extreme example of the tenuous situations humorists can find themselves in today.

All of his examples go back to Birbiglia’s main point about humor. As he notes, once you get the joke “it’s like we’re married,” for the audience in question then becomes much more willing to listen to the speaker.

Looking like a perennially unmade bed with his rumpled attire, untucked shirt, and slightly slumped posture, Birbiglia shows himself to be a master of the art of storytelling. He often takes a roundabout route to get where he’s going, but always has a masterful payoff.

Such stories include how Massachusetts became Mousachusetts, with a stop at Catsachusetts along the way, and his hosting the Gotham Awards in 2012, when he quoted verbatim some unflattering things one of the honorees had said previously. (Google Mike Birbiglia and director David O. Russell for more information on what happened in that regard.)

Filled with material guaranteed to make you alternatively groan and roar with laughter, the work never fails to stress the importance of being able to laugh at oneself, in the right circumstances of course.

“Thank God for Jokes” offers a rib-tickling and thought-provoking experience.

Judd Hollander is a member of the Drama Desk and reviewer for stagebuzz.com and theaterscene.com