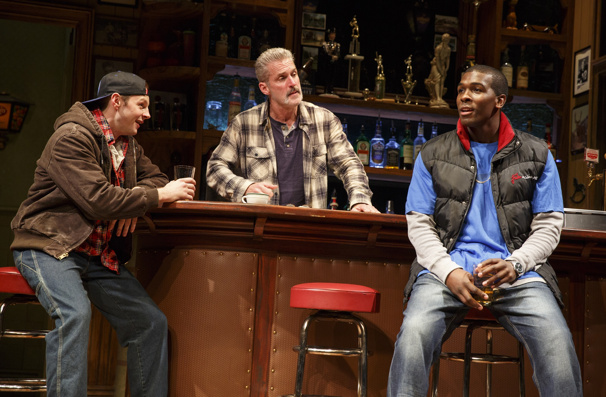 When change is the enemy
By Judd Hollander

NEW YORK—In “Sweat,” playwright Lynn Nottage puts a human face on a sadly all-too-familiar subject, the plight of manufacturing jobs. Powerfully acted and strongly directed, the story sharply resonates due to its lack of easy answers. Yet the very familiarity of the tale is also the play’s weakness.

Things begin in Reading, Pennsylvania, in 2008 when Jason (Will Pullen) and Chris (Khris Davis), recent parolees after an eight-year stretch, are being interviewed by their parole officer (Lance Coadie Williams).

We jump back eight years to learn the backstory of Jason and Chris, their mothers Tracey (Johanna Day) and Cynthia (Michelle Wilson) respectively, as well as the mentality of a good part of the town itself. Specifically, many of Reading’s middle class depend on the local factory for their livelihood.

The workers often meet at a nearby bar after their shift. Bar manager Stan (James Colby) put in a lot of years on the factory floor until an injury ended his time there. Stan’s recollections of how he was treated by the company after the accident offer an ominous premonition.

While things at the plant look rosy outwardly, there’s an undercurrent of tension. Rumors of layoffs keep surfacing, along with the possibility that the owners might move operations elsewhere.

This unease increases when Oscar (Carlo Albán), a Colombian-American who works at Stan’s bar, tells Tracey of a job posting he saw offering people the chance to fill out a factory application for training.

While Tracey angrily dismisses what Oscar tells her as fiction, we quickly see the narrative coming into focus: how the owners are looking to improve their bottom line and stay competitive at the expense of those who have worked at the plant for decades.

Hand in hand with the changing economic winds comes the issue of racism. While the issue is buried in good times, it emerges in times of trouble. Tracey, who is white, responds to Oscar’s questions about getting a job in the factory by saying it’s a closed shop and that someone like him can’t just come over and try to steal their jobs.

Oscar points out that he was born in Pennsylvania, and Tracey’s ironic response comes as she talks about her grandfather, who was German, and how he came to this country in the 1920s.

Bitterness emerges when Cynthia, an African-American, is promoted to a supervisor job despite Tracey’s having seniority. Tracey wonders if Cynthia got the job solely because of her race.

Conversely, Cynthia soon wonders if she was chosen so her superiors could have someone to take the heat when passing on the inevitable bad news about the factory’s future. Cynthia finds herself torn between staying loyal to the friends she has worked with for so long or keeping the new job that she’s so proud of. She’s the first in her family to become a manager.

The growing strain between Cynthia and Tracey leads to the ultimate question of whom the American Dream belongs to. The question is played out many times during the show.

Oscar, for example, is seriously considering one of the jobs being offered at the factory because it’s a step up from his current work situation. While technically Oscar would be taking a job away from someone now working at the plant, he doesn’t understand why he should be blamed for stepping into a situation he didn’t create.

Ultimately, the show point outs that change is inevitable, and the sooner you prepare yourself for it, the better. It’s a warning that Brucie (John Earl Jelks), Cynthia’s estranged husband, tries to pass on to Chris and Jason.

Brucie, who used to work in a textile mill, has been on strike for close to two years. His factory has simply locked him and his co-workers out and hired cheaper replacements.

While “Sweat” offers a very compelling story, it’s one that’s been told many times before and offers no new ground. The play hits all the emotional moments and too-familiar refrains almost as if checking them off a list.

The show is also unable to convincingly link the 2008 and 2001 scenes; the narrative jumps abruptly, and the fates of certain characters are not fully explained.

It’s a testament to the actors that the play works as well as it does. Indeed, most of the people depicted are ones you can see hanging around with after a hard day’s work.

Wilson and Day do excellent work here, as does Colby, who brings an air of genial maturity to Stan.

Pullen and Davis are good as two young dreamers who think the world is at their feet, until they, like the rest of the characters, find themselves pulled into a situation where they have no control.

Jelks does standout work as a beaten-down man who loses almost everything due to his reversal of fortune.

Presenting a story neither totally bleak nor overly hopeful, “Sweat” paints a humanistic picture that has played out time and again. While the story offers nothing new in its message, it’s still sobering to watch.