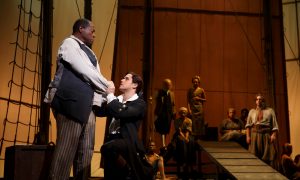 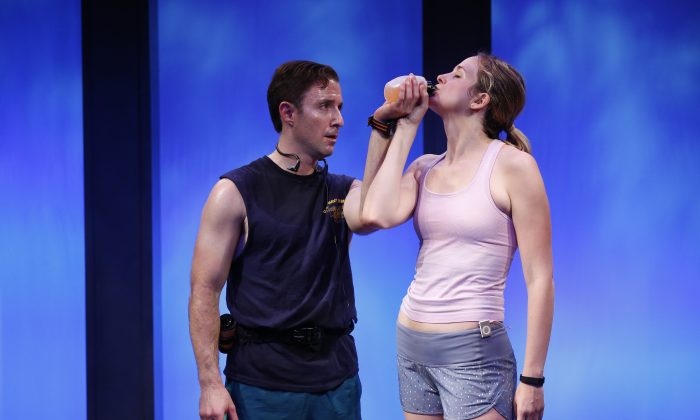 (L–R) J.J. Kandel and Clea Alsip in “10K,” written and directed by Neil LaBute, as part of Summer Shorts 2015. The work asks just how far you can go without going too far. (Carol Rosegg)
Arts & Culture

NEW YORK—The meaning behind the meetings forms the basis of each of the three one-act works that comprise Series A of Throughline Artist’s annual Summer Shorts at 59 E 59 Theaters. In each, people’s culturally shaped, preconceived notions are quickly called into question.

In Neil LaBute’s “10K,” a Man (J.J. Kandel) and Woman (Clea Alsip) meet in a wooded area while jogging. Quickly striking up a conversation, these two, who at first glance having nothing in common, actually have strikingly similar issues of dissatisfaction in their lives.

This random encounter, if it is indeed random, quickly turns into something with far-reaching consequences. Crackling with sexual tension, an element of danger, and well played by both actors, the play keeps one guessing about who is pulling the strings and who has no idea about what’s going on.

The work asks just how far you can go without going too far. LaBute does a nice job with the directing chores here.

All three stories present the idea of people being thrust into a situation over which they have no control.

Next up is “Glenburn 12 WP,” written by Vickie Ramirez and directed by Kel Haney. As “die-in” protests in reaction to police brutality are going on in New York City’s Grand Central Station, Troy (W. Tre Davis), a young black man, ducks into a bar nearby, only to find it deserted.

Moments later, Roberta (Tanis Parenteau), a Native American woman and apparently a regular customer, comes in and after chiding Troy for not being at the protests, begins a verbal game of cat and mouse. She is trying to find out what makes the young man tick. Troy, for his part, is just interested in getting a drink—if he can find the bartender, that is.

Part mystery and part social commentary—with issues of race and vengeance lurking in the shadows—the play shows how it’s often easier to believe one’s first impression of a situation rather than the actual truth.

Nicely presented by all concerned, it’s a tale that keeps you guessing until the end.

The final work of this series is “The Sentinels” by Matthew Lopez. This is the one show of the three that has the potential to bring forth an almost universal feeling of sympathy and understanding, though sadly it’s also the least focused.

Spanning 2011–2000, going backward chronologically, the show offers brief snapshots into these three women’s lives, showing that some are able to move on, while others let the catastrophic event define them.

It should also be noted that being defined by a certain event is quite different from remembering it and honoring those who are no longer alive.

As the play progresses, the characters become more engaging as the years of trying to heal are stripped away. Yet while we are able to see the pain these women feel, we never really get to know who they are beyond this event. The text does not fill in the gaps between the meetings or offer a strong back story. Directed by Stephen Brackett, the play also features Zuzanna Szadkowski.

Taken as a Whole

All three stories present the idea of people being thrust into a situation over which they have no control.

“10K” and “Glenburn 12 WP” both succeed brilliantly, not only for the tight acting and direction, but also the solid construction of the stories.

At first the two tales feed into stereotypes prevalent in the media today. For example, a scruffily dressed black man comes into a bar catering to a crowd completely at odds with our idea of who he would associate with. But then the story flips around in order to show what seemed so obvious at first glance to be a rush in judgment, both by the characters involved—on both sides of the equation—and by the audience.

It’s also sadly true that in either tale, if one wanted to create a scenario where the other party could be blamed for something that is not their fault, it would be quite easy to make others believe it was true.

In “The Sentinels” the question is not what is going on and why, but rather how those affected by a singular event deal with it—both in the short and long term. The question becomes how does one remember the past and those lost without becoming overwhelmed by it forever?

The play fails to answer the question satisfactorily and neglects to offer the audience a chance to get to know the women. Thus, the story feels like we are eating an appetizer and then going straight to the dessert—somewhat fulfilling, but ultimately feeling that something is missing.

Series A of Summer Shorts boasts two very solid works and a third that’s intriguing enough to hold one’s interest but that needs to go a bit deeper.