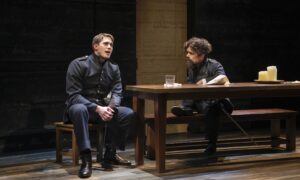 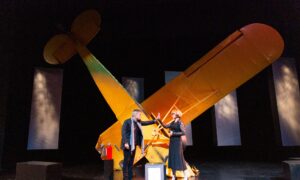 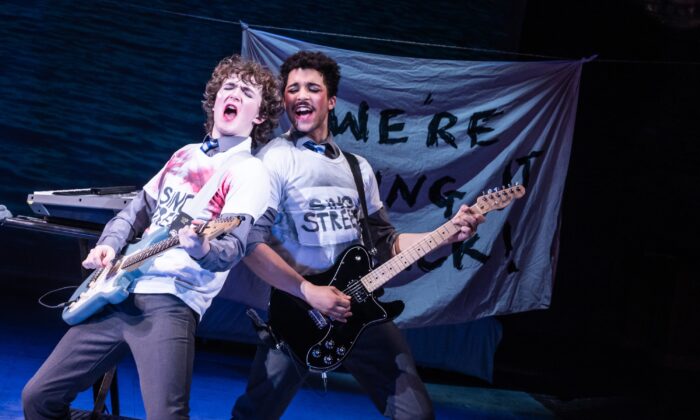 NEW YORK—Few shows start off with as much promise as the new off-Broadway musical “Sing Street,” at New York Theatre Workshop. Based on the 2016 British film of the same name, this stage version still has some kinks to work out as the work progresses, but it is still quite the breath of fresh air.

In 1982, Conor Lawlor (Brenock O’Connor) is a 16-year-old aspiring musician from a troubled family in Dublin, Ireland. Due to the distressed economy, his architect father (Billy Carter) has been out of work for some time, which has strained his already troubled marriage.

Conor’s older brother Brendan (Gus Halper) has been a virtual recluse for years, while his 19-year-old sister Anne (Skyler Volpe) is under tremendous pressure to complete her studies so she can land a well-paying job.

In the meantime, and in an attempt to save money, Conor finds himself being taken out of his current school and transferred to a free educational institution called “Synge Street.” Run by the Christian Brothers, the school is named after Irish playwright John Millington Synge (pronounced “Sing.”)

Transferring to a new school in the middle of the term is rarely an enjoyable experience, and Conor’s situation is no exception. He runs afoul of the school bully (Johnny Newcomb), and gets a talking to from Brother Baxter (Martin Moran). Baxter, who runs the school with an iron hand, explains in a deceptively quiet voice how conformity and following the rules is the top priority.

Things look up for Conor when he sees a beautiful girl named Raphina (Zara Devlin). In an attempt to strike up a conversation, Conor tells her she’d be perfect for the music video he is preparing to shoot. Raphina, who has aspirations to be a model, and who already has a boyfriend, shows quick interest in Conor’s proposal.

Of course, Conor must now write a song and get a band together, as well as come up with a concept for the video. As he attempts to do just that, he and his fellow schoolmates, whom he has recruited as band members, find in their performances the joy that comes with freedom of expression. They are able, through their music and style of dress in the videos, to rebel against the regimentation in their lives.

However, as Conor’s self-confidence grows, along with his attraction to Raphina, he finds himself facing factors both at home and in school that threaten to derail his hopes for the future—including the fact that Raphina is planning to move away to London.

“Sing Street” is all about finding a special connection that makes you complete and allows you to move forward in life. This idea of following your dreams, and being able to express what you truly need, cuts across all age groups and personal situations. It also becomes clear that maintaining one’s own emotional well-being is more important than doing only what’s expected by others.

When it comes to the score, this production can do no wrong. The music by Gary Clark and John Carney—Carney having also written and directed the film version—is excellent, be it a raucous number, of which there are many, or a more soulful tune, such as when Raphina asks Conor to write her “a happy song.” As in the film, the score combines original music and numbers from the 1980s.

Also instrumental in making the numbers really come alive is the absolutely superb choreographic work of Sonya Tayeh, which brings forth moments of slick professionalism in some instances and deliberately awkward efforts in others (as when showing inexperienced high school kids trying to shoot a video for the first time).

Rebecca Taichman’s direction is nicely paced, allowing one scene to flow into the next smoothly and believably.

Unfortunately, the show’s book by Enda Walsh is uneven. Too many characters are introduced without being fully developed. As just about all of these are intriguing, missing the chance to find out more about them hurts the tale’s overall effect.

Another problem can be found with the casting of the band members. While all are brilliant in their respective roles, many look far too old to be believable as high school students.

O’Connor projects just the right amount of earnestness as Conor. He embodies not so much an angry young man as one who, after being beaten down time and again, finally decides to stand up for what he believes in.

Max William Bartos does well as Darren, the “fixer” of the band and Conor’s eventual one-man support system as Conor tries to keep the group going.

Halper presents an interesting picture as Brendan, a young man who was once in Conor’s shoes and sees in his younger brother the person he used to be.

“Sing Street” is a show about finding yourself and having the courage to follow your dreams. It’s a message gloriously delivered in a show that, on a purely emotional level at least, succeeds at every step.