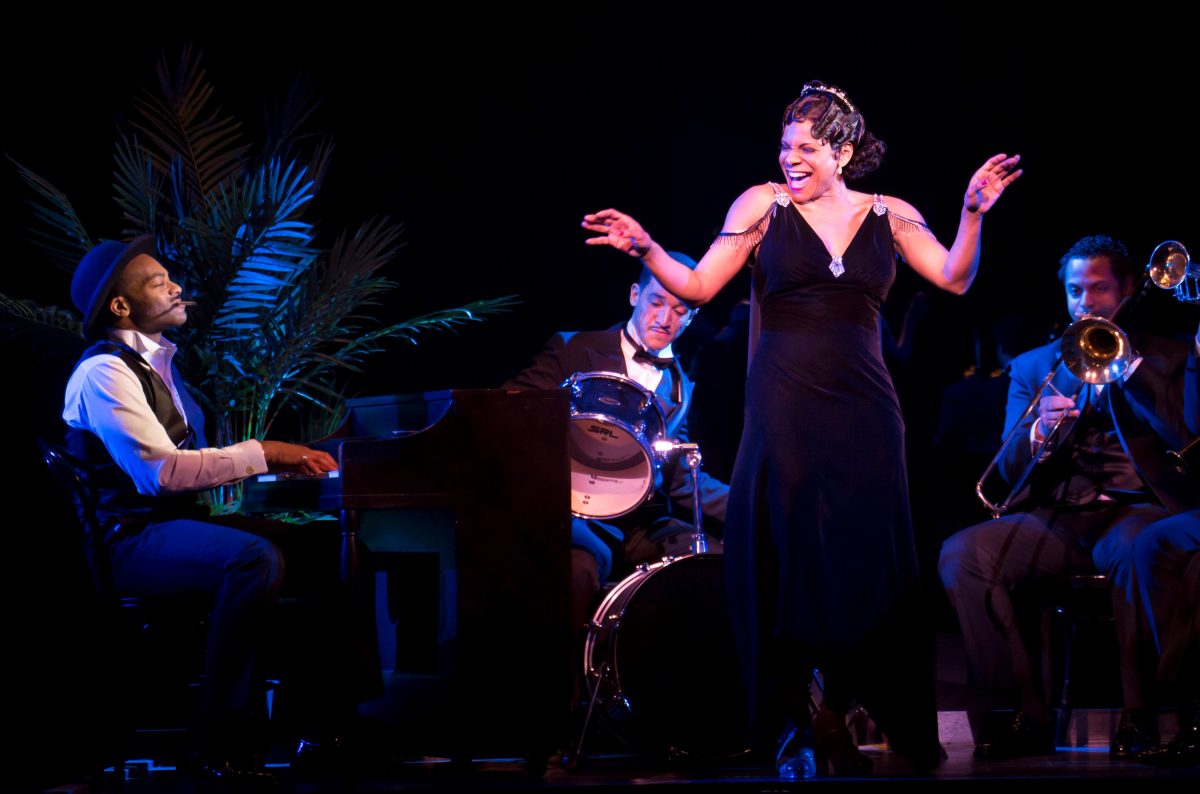 Eubie Blake (Brandon Victor Dixon, on far left) and diva Lottie Gee (Audra McDonald), in "Shuffle Along or the Making of the Musical Sensation of 1921 and All That Followed." (Julieta Cervantes)
Arts & Culture

Theater Review: ‘Shuffle Along, or the Making of the Musical Sensation of 1921 and All That Followed’

A case of trying too hard
BY Judd Hollander TIMEJuly 6, 2016 PRINT

NEW YORK—When telling a story for entertainment purposes, defining and limiting the story is crucial. Sadly, George C. Wolfe, book writer and director of “Shuffle Along or the Making of the Musical Sensation of 1921 and All That Followed,” doesn’t seem to have figured that out. The result is that this very impressive work ends up losing its heart.

“Shuffle Along,” the first Broadway show created by and featuring an entirely African-American company, had its genesis with the vaudeville team of F.E. Miller (Brian Stokes Mitchell) and Aubrey Lyles (Billy Porter).

Using a political comic sketch they had previously created about “the God-given right for every American to make the wrong decision”—certainly topical material—and teaming with songwriters Noble Sissle (Joshua Henry) and Eubie Blake (Brandon Victor Dixon), they decide to expand the idea into a full-length work.

A highlight of the show is the very enjoyable score.

Then, frustrated by the lack of support they receive to get the show produced, the group decides to produce it themselves. With help from theater producer John Cort, the foursome prepare for Broadway.

They hire dancers and singers, including diva-like Lottie Gee (Audra McDonald), and clash on creative differences as they pull their production together. Eventually, they take the show out on the road with a cash reserve so low they’re often one jump ahead of the poor house.

Yet instead of focusing on one major aspect or storyline dealing with the musical’s creation, Wolfe and the rest of the creative team bring forth far too many, trying to give equal weight to each. They present issues of racism, marital strife, the need to provide for one’s family, and the effect of loyalty to the almighty dollar over promises made to one’s friends.

Add to this mishmash the fleeting looks at the personalities involved and the show ends up with characters who don’t come off as anything close to being real—ironic, because just about all of them were real people.

These problems surface in the second half of the show when, now that “Shuffle Along” is a bona fide hit, its creators find themselves pulled in numerous directions as they try to capitalize on their new artistic and financial freedom.

A highlight of the show is the very enjoyable score, which features such tunes as “Honeysuckle Time,” “Love Will Find a Way,” and the hit “I’m Just Wild About Harry.”

The arrangements and orchestrations by Daryl Waters help make the songs feel powerful and fresh, as does the singing talents of the performers.

Savion Glover’s choreography, however, quickly takes on a feeling of repetitiveness and fails to freshen the dancing beyond that of a museum piece.

The acting performances are all fine with no particular standouts. Mitchell does a very good job with the determined Miller, someone who basically does what he has to do in order to earn money for his family. He willingly rips out three rows of the Broadway theater where “Shuffle Along” is booked so the company can put in an orchestra pit.  He begrudgingly allows a racially demeaning vaudeville sketch because that’s the only way he could earn money at the time.

Porter does a nice job with Lyles, a man, unlike his partner, who isn’t afraid to make waves in an uncomfortable situation. He is willing to walk out on the aforementioned demeaning performance, and to fire an actress from the company because she repeated rumors about the show’s financial troubles. At the time, Lyles didn’t want that information to get back to the rest of the company.

Instead of focusing on one major aspect or storyline dealing with the musical’s creation, writer/director George C. Wolfe and the rest of the creative team bring forth far too many.

Also quite good are scenes between McDonald and Dixon, the diva-like Gee and the married Blake, who begin what would become a long-term affair. The actors have good onstage chemistry together. Indeed, the story about their relationship could easily have become a show all on its own—one of several storylines that could have been split off into another work.

The effect that “Shuffle Along” had, with the perceptions it changed—that is, whites going up to clubs in Harlem in the wake of its success—and the careers it helped launch, including those of Josephine Baker, Florence Mills, Gertrude Saunders, and Paul Robeson, is undeniable.

Yet while the effort to reintroduce the show to modern audiences and expand on its history is laudable, those involved in that process are simply too enamored with the material to present enough cohesion to properly meet those goals.

Judd Hollander is a member of the Drama Desk and reviewer for stagebuzz.com