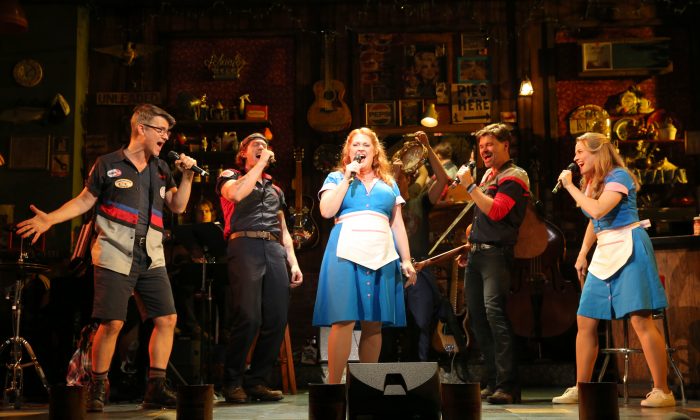 The cast of “Pump Boys and Dinettes” singing a number from the show. (Joan Marcus)
Arts & Culture

An affectionate tribute to the myriad places on highways across the country where you can come for the service and come back for the company, the story takes place at a rest stop on Highway 57 somewhere between Frog Level and Smyrna, North Carolina.

Life for this group is basic and simple, as is the plot. There’s a bit of a romance between Jim and Rhetta, but the rest of the show is paper thin, with different musical selections held together by banter between the different characters with Jim serving as the overall narrator, often speaking directly to the audience.

While the audience never got the feeling of physically being in the location described, the show did recreate a down home feeling, and made viewers want to get out and start driving to see if they could find such a place waiting for them out there on the road.

More importantly, the entire score was wonderful to hear, the cast throwing themselves into the songs with full enthusiasm and making each number feel fresh and fun. The first few offerings “Highway 57,” “Taking it Slow,” set the mood for what was to follow.

The show also offers up a simple message: We need to take the time to relax, kick back, and smell the roses, instead of rushing around from one place or job to the next. This may also be the reason why the boys at the filling station have never quite gotten around to fixing the Winnebago belonging to Jim’s Uncle—at least not until act two.

There’s also the message that we should not ignore what’s right in front of us. Rhetta points this out to Jim in the somewhat scolding “Be Good or Be Gone,” or as explained in” T.N.D.P.W.A.M” (“The Night Dolly Parton Was Almost Mine”), one of several numbers that adds a bit of wistfulness to the story.

Other strong tunes included “Tips” sung by Parris and Thompson, a number which should strike a chord with anyone who’s ever worked in the service industry; and the absolutely hilarious “Fisherman’s Prayer,” which had more than one person in the audience nodding their head in recognition. The tune shows that what should be an enjoyable pastime can turn into a complete obsession.

Also of note were “Vacation” and “Drinkin’ Shoes,” songs which perfectly illustrated that while working may be a necessary part of life, everyone needs a bit of time off now and again—or at least as often as humanly possible.

The cast provided their own musical accompaniment to the songs. Among the instruments used were guitar, piano, accordion, harmonica, bass, and various forms of percussion, such as drums, pots, pans and spoons. The entire company did a great job in that regard, with Redd particularly standing out with his performances at the piano.

Elsewhere Foster made for an engaging narrator, setting each scene and sequence nicely. The other actors all came across as amiable, with Thompson getting high marks and the biggest hand of the night for a split she performed during one of the musical numbers.

Direction by Lear deBessonet kept things moving easily from one song to the next, so that the show gave off a continual feeling of relaxation and enjoyment. Donyale Werle set’s was particularly good, filled with a large selection of Americana artifacts you’d expect to see in a such a place along the roadside.

The biggest strength of Pump Boys and Dinettes is that it never tries to be more than it is, and for the most part, that’s more than enough. While a few moments are a bit dated here and there, such as the Dolly Parton number, the show offers a nice respite from the hustle and bustle of life and makes for a very pleasant experience.

There was supposed to be a revival of the show on Broadway this year, but that was postponed. Still, it’s sure to turn up again sooner or later and when it does, make sure you go see it. You won’t be disappointed.

Also in the production was Austin Moorhead on guitar.

Judd Hollander is the New York correspondent of the London publication The Stage.