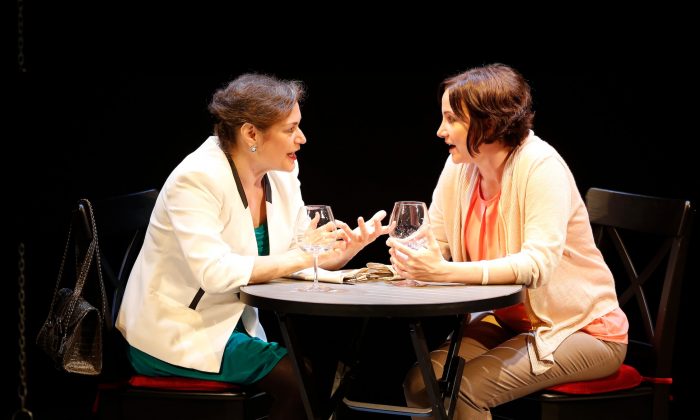 NEW YORK—Power Plays, a collection of five one-act works presented by Theater Breaking Through Barriers, offers a nice variety of possibilities. Sadly, most are done in by lackluster direction and sub-par performances—with at least two happy exceptions.

As Lonnie marvels about her good fortune, Bridget’s jealousy begins to appear in the form of a changing background as she imagines taking out her frustration on Lonnie via slow-motion violence.

Despite its interesting idea, the tale fails due to one-dimensional characterizations and monotonous pacing. The latter continues long after the central point has been made. Directed by Christina Roussos.

I Dare You
Similar problems appear in Neal Labute’s I Dare You, directed by Nicholas Viselli. As the story begins, One (Ann Marie Morelli) has gone to confront Two (Samantha Debicki) for sleeping with her boyfriend—something Two only did because she wanted the couple to break up; she sees One as her own potential soul mate.

The story could be played as farce, comedy, or drama, but this production sadly takes the easy way out with the outcome obvious from the beginning. Morelli protests far too much without varying her emotional range, and Debicki continually puts forth her earnestness into the air, getting nothing in return.

The Happy … Blind Guy
Things take a turn for the better in Bruce Graham’s hilarious The Happy … Blind Guy. Tim (David Rosar Stearns), a blind man working as a supermarket bagger, is called before his supervisor, Larry (Nicholas Viselli), because other employees are complaining that the always happy Tim is making them look bad with the high quality of his work.

Tim explains to Larry that he likes people and that his other senses enable him to recognize the customers more easily—especially women. He knows them via the sound of a bracelet or the smell of perfume, and that being blind makes him a virtual babe magnet. His other senses—such as the ability to listen and the great use of his hands—help to seal the deal.

Refreshingly politically incorrect with Stearns delivering a knockout performance, the show is laugh-out-loud funny and also a gentle satire of soulless people trapped in jobs they hate.

Viselli is excellent in the latter category as someone who can only shake his head in disbelief after hearing how together Tim’s life actually seems to be. The story is also strongly paced for maximum effect by director Russell Treyz.

Between
Not faring nearly as well is John Guare’s Between. Set in a posh restaurant, A (Sabaugh) and B (Melanie Boland) are enjoying their time together, speculating if the other patrons are thinking about them. The couple could be lovers, on their first date, good friends, or celebrities trying not to call attention to themselves. Unfortunately, it is never made clear.

Veering into the existential while contemplating both the past and future, the two characters are quite bland, making both their comments and situation uninteresting. One keeps hoping something will shake things up or at least illuminate the two to some degree. Directed by Ike Schambelan.

Underground
Things end on a somewhat high note with David Henry Hwang’s Underground. Based on a true story and a piece that could be expanded into a full-length work, Jake (Viselli) and his wheelchair-bound wife, Marin (Morelli), find themselves stuck in the Times Square subway station when all the wheelchair exits are out of service.

As they try to find a way to the surface, they meet Bob (Lawrence Merritt), an elderly man who just wants to do a good deed—even if that means pushing Marin’s motorized wheelchair, and Randy (Mary Theresa Archbold), an MTA employee rather oblivious to their plight.

At one point, when waiting on the subway platform alone after the rest have gone for help, Marin meets Vicki (Jamie Petrone), the “Accessibility Spirit of the Underground.” The two imagine what life would be like in a world without walking people as they dance to music only they can hear.

An interesting piece, with more than a few deliberate nods to The Wizard of Oz, the play is enjoyable enough, though some of the characters are rather stereotypical, and things end too abruptly without any sense of closure.

Theater Breaking Through Barriers uses both disabled and able-bodied actors in their productions, and it’s worth noting that the two works that specifically deal with disabilities in their storylines are by far the most interesting.

All told, not completely terrible, but not terribly complete either.