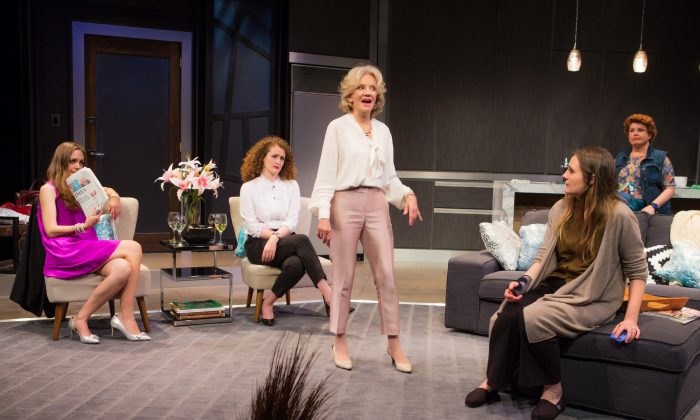 NEW YORK—The term “party face” can best be described as a defense mechanism. Specifically, it’s an attitude one assumes in public so as not to show those you interact with, be they family, friends, neighbors, or total strangers, how you truly feel. Some of the characters gathering for a party in Irish playwright Isobel Mahon’s comedy named for that term (now at New York City Center Stage II) are adept at taking on that attitude.

In an up-and-coming suburb of Dublin, Ireland, Mollie Mae (Gina Costigan) is hosting a get-together to show off her new kitchen extension. This renovation is apparently the current thing, with several homes in the neighborhood also having their kitchens recently remodeled.

However, Mollie’s planned low-key evening is upended before it even begins thanks to Carmel (Hayley Mills), Mollie Mae’s seemingly well-meaning, take-charge mother.

Committing the cardinal sin of arriving at the party 10 minutes early, Carmel immediately assumes control of the entire event, from selecting the food to be offered to telling her daughter to go get dressed, even though Mollie Mae is already clad in what she intends to wear for the evening.

Mollie Mae, it turns out, recently suffered a mental breakdown and was just released from a psychiatric institution. Her mental instability is an ongoing issue and has put a severe strain on her 16-year marriage.

Carmel, however, refuses to dwell on such matters and is determined the party be a rousing success, which is why she has invited her daughter’s neighbor Chloe (Allison Jean White), thinking she’d be a good fit. Mollie Mae can’t stand Chloe.

Also expected is Mollie Mae’s sister Maeve (Brenda Meaney). Carmel and Maeve have their own long-simmering issues, including that the divorced Maeve is not Carmel’s favorite offspring—something that Maeve is painfully aware of.

It doesn’t take long to realize that Carmel and her daughters would benefit from intensive psychiatric therapy, or at least a few hours on Dr. Phil’s show.

Played almost entirely for laughs, the play’s dialogue is peppered with backhanded compliments and veiled insults. The audience sees a cornucopia of unresolved issues on display—denial and enabling being the two biggest—during what rapidly becomes a party from hell.

Unfortunately, the play remains at the level of a television sitcom, with little opportunity for the audience to understand the characters. The entire first act is structured so that we are all but guaranteed an emotional explosion of some kind after the intermission. But this realization blunts the impact and immediacy of the Act 2 revelations.

While Mahon makes it clear that the issues explored cannot be resolved quickly or simply, by the time the show is over, we get the feeling some of the characters are not ready to make the effort at resolution. And with the audience having little chance to see who these characters really are inside and thus make an emotional investment in them, their fates don’t mean as much as they should.

In regard to the acting, the show delivers on every level. Mills, in particular, turns in a wonderful performance, though her Irish accent slips now and again; Costigan is believable as the subdued Mollie Mae, a woman trying to rebuild her life with as little fuss as possible; and Meaney does well as the defensive and cynical Maeve.

Ironically, it’s the two non-family members at the party who really stand out. White is an absolute scream as Chloe, a seeming airhead who, in her own blundering way, tries to be everybody’s confidant and get to the heart of every situation. Her attempts at on-the-fly therapy are truly hilarious.

Also delivering an excellent performance is actress Klea Blackhurst as Bernie. A self-described “manic-depressive/obsessive-compulsive” who Mollie Mae met while hospitalized, the character is so germ-phobic that she carries her own food and eating utensils wherever she goes. Offering verbal pearls of wisdom and a live-and-let-live attitude, she comes across as the most together person at the gathering, even as she continues to wrap objects in plastic.

Amanda Bearse does a good job with the directing, helping to ensure that the lightweight nature of the show doesn’t dispel the darker elements. Jeff Ridenour’s set is well done, offering a strong take on a modern kitchen, along with a typical suburban backyard that one would find in a California cul-de-sac or any other well-tended neighborhood.

“Party Face” reminds me of a frothy dessert. It tastes good initially, but by the end, I found myself wishing for something more substantial. Cute and funny, with elements of something serious underneath, the work never rises to its full potential.