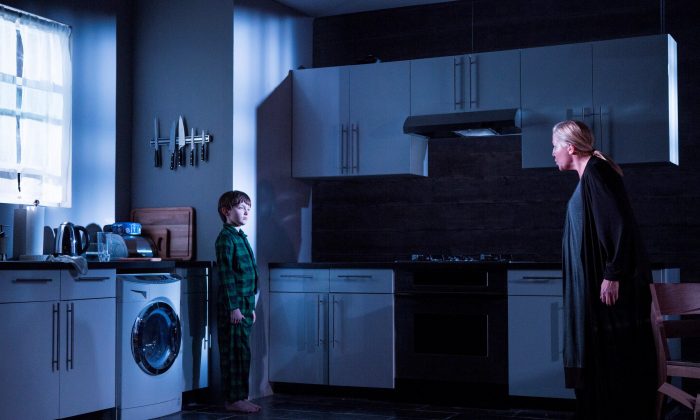 Daniel (Henry Kelemen) is more than a handful for his mother (Mary McCann) in the new play “Our New Girl.” (Kevin Thomas Garcia)
Arts & Culture

NEW YORK—In Nancy Harris’s Our New Girl, now at the Atlantic Theater Company Stage 2, one gets the feeling of walking on a razor’s edge. Grabbing the audience by the throat from the first moments of the show until the last, the story is taut, powerful, and brilliantly executed.

In present day London, Hazel (Mary McCann) a litigator turned stay-at-home mom, is at her wits’ end. She’s very pregnant with her second child, has her hands full with son Daniel (Henry Kelemen), a somber 8-year-old, and is desperately trying to get her new business off the ground.

Her physician husband, Richard (CJ Wilson), is in Haiti, treating victims of an earthquake, and so she has no support system to help her—that is, until Annie (Lisa Joyce) arrives from Ireland. Annie was hired by Richard as a nanny without Hazel’s knowledge.

At first Hazel wants nothing to do with the idea, but Annie convinces Hazel to let her stay, making herself more and more valuable over time. She also slowly insinuates herself into Hazel’s family.

Annie, who has a clear affinity for children, seems to relate better to Daniel than Hazel does. Indeed, it’s not long before Hazel takes on the role of the strict disciplinarian, and Annie becomes the more tolerant one. Soon battle lines are drawn over the best way to raise the boy. When Richard returns, he seems to side more with Annie than his wife.

What’s so interesting about the play is that there are no immediate heroes and villains. The play’s moral compass continually changes until the underlying message becomes clear: the importance of recognizing one’s own flaws and being able to move on from there.

Hazel, for example, is trying to be the woman who has it all—running a successful business at home and also being a full-time mom. But, as Richard points out, she’s simply unable to cope with the realities of her situation.

Hazel also has made a mistake no mother ever should, which Annie takes her to task for; this fuels the guilt Hazel already feels about the incident.

Annie is dealing with her own parental issues and turns out to be a classic enabler. She always makes excuses for people in her own family, as well as for Daniel, who’s having problems at school. She’s also more than a little jealous of Hazel and would do anything to usurp her position.

As for Richard, while often making sweeping judgments in regard to Daniel, he jets off on another mission of mercy and devotes little time to the problems at home.

Calling to mind elements of The Omen, The Hand That Rocks The Cradle, and All About Eve, Harris and director Gaye Taylor Upchurch keep the tension ratcheted up as questions debated range from Daniel’s behavior toward another student to his being able to have a pet.

When looking back over the course of the show, it’s ironic to see which of the three adults actually trusts Daniel the most and is willing to believe in him. This is something quite different than simply telling Daniel what he wants to hear.

The show also points out how the biggest hypocrites are often the ones protesting the loudest.

McCann does a great job as Hazel, a woman who tries to do the right thing but is usually overwhelmed by circumstances; at times she seems only a half-step away from exploding in rage. She’s very protective of what she has and will fight to the death to keep it.

Joyce is very effective as Annie, a woman who has the best of motives on the one hand, yet is ultimately unable to separate past experiences from the present. She’s resolute in sticking to one narrative and disregards the fact that she could at times be wrong.

Wilson is good as Richard, a dedicated doctor who always tries to take the easy way out—either through bluster, righteous rage, or simply not answering his phone.

Kelemen is positively chilling as Daniel. His silences and petulance speak volumes as one wonders about his ultimate motives. Indeed, one of the most powerful moments occurs in a scene with Daniel, Hazel, and a chair, where one could hear a pin drop while the sequence was being played out.

A nail-biter from start to finish, Our New Girl makes for an excellent piece of theater. This playwright definitely bears watching in the future.