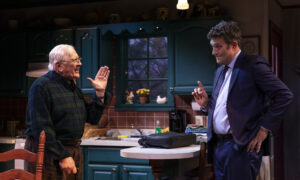 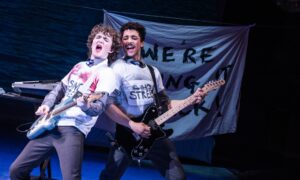 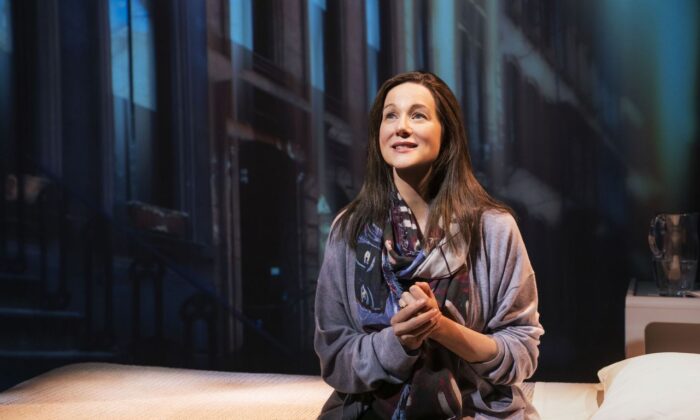 NEW YORK—Each of us has links to our past, no matter how we may try to deny them. These connections, which can resurface at the most emotionally charged times, are made clear in Rona Munro’s one-person stage adaptation of Elizabeth Strout’s novel “My Name Is Lucy Barton.”

As Lucy (Laura Linney) states at the outset, this is a tale told through the prism of memory. She recalls a time in the early 1980s in New York City when, as a struggling writer with a husband and two young daughters, she entered the hospital for a routine operation, only to develop unexpected and serious complications. Her supposedly brief stay turned into a nine-week ordeal.

One day, while lying in her hospital bed, Lucy is astonished by the arrival of her mother, whom she hadn’t seen in years. She’d been estranged from her parents ever since she left her hometown to go to college in Chicago.

Lucy comes from what might be described as a repressive environment. There was never a television in the house, and going to the movies was not allowed. She felt culturally challenged for years afterward as a result.

After getting over the initial shock of seeing her mom (whom she did not ask or expect to visit), Lucy finds herself trying to reach out for comfort. This is not an easy task, especially since her mother was always emotionally guarded. Yet through the stories the older woman tells, and the conversations the two have, Lucy begins to see her mother in ways she never did before.

As the play makes clear, everybody has a story to tell. Lucy tells hers from the added benefit of hindsight, and as she does so, the audience also begins to understand the people in Lucy’s life. Once her mom mentions that she had enjoyed the music of Elvis Presley—albeit only his earlier songs, Lucy recalls: “I couldn’t believe my mother had listened to Elvis Presley. Had she … danced?”

The one common thread linking mother and daughter is their loneliness, for “My Name Is Lucy Barton” is just as much a play about the inability to reach out to those closest to you as it is about family ties.

Lucy’s mother, in her stories, relates gossipy information about people her daughter used to know. These tales often contain semi-disguised jabs at the life choices her daughter has made. One gets the impression that her mother feels Lucy betrayed the family by moving away—something Lucy herself admits later on.

Yet at the same time, her mom has come to New York, a city she has never before visited, simply because her daughter needs her. It seems Lucy may not have considered that at first.

While the play may be titled “My Name Is Lucy Barton,” it is, ironically, Lucy’s mother and the others in Lucy’s orbit (husband, father, siblings) who catch our interest. For Lucy, as we see, has been down the rabbit hole and come out the other side, while it is the recollections and snapshots of the other characters that hint at issues still unresolved and all deserving of stories of their own.

Laura Linney at Her Best

Having originated the role in London, Linney does an excellent job with the material. She is able to portray Lucy as both a lost and fragmented person, yet also one made self-confident with the passage of years.

Her experiences have been tempered by the realization that decisions made in any particular relationship may alter it forever—even if those decisions seemed perfectly reasonable at the time. In fact, Lucy’s current relationship with her daughters at times mirrors her past situation with her mother, due to choices that she and her mom made.

Lucy’s mom, through Linney’s performance and Munro’s text, comes alive as someone fiercely determined and proud—especially when it comes to her heritage. Neither Lucy nor her mother makes apologies for who they are or the life they have led.

The only real criticism of the play is that after a while monotony sets in. Each situation unfolds in the same quiet and roundabout way. While Munro (and Linney) is telling a fascinating, interlocking, generational tale, it would have been better to see some events in a straightforward fashion. It’s not a case of there being too much information, but rather one where not everything is used as effectively as it could have been.

The set by Bob Crowley, basically a hospital bed and chair, works fine; the different video designs by Luke Halls help to set the background as needed. Richard Eyre’s direction is strong at some points and rather lackadaisical at others.

Presented by the Manhattan Theatre Club, “My Name Is Lucy Barton” gives an incisive look at family relationships and the loneliness that arises when one has some stories that he or she is simply unable to share. And where the best way to deal with them is to be as true to oneself as possible.