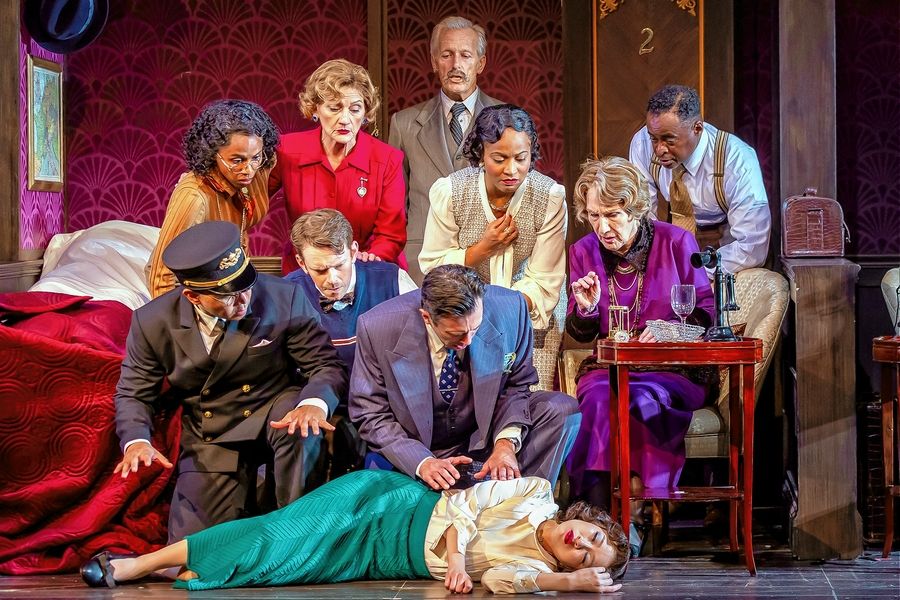 The cast of “Murder on the Orient Express.” (Brett Beiner)
Performing Arts

OAKBROOK TERRACE, Ill.—When Agatha Christie’s first novel was accepted by a publisher, he signed her to an exploitive five-novel deal for a pittance. The publisher believed that Christie was good for only a few books and thought after the five-book deal nothing would be heard from her again. It was the biggest publishing mistake in history because the crime writer went on to write 66 mystery novels and 14 collections of short stories making her the most popular and money-making author of all time (outsold only by the Bible and Shakespeare).

Among those works, one of the best loved is “Murder on the Orient Express,” which is why so many films have been made of it. With that whodunit produced in so many forms, and with so many knowing its ending, is it possible to make a theatrical production of it worthwhile? The answer is a resounding yes, with the triumphant production of it now playing at the Drury Lane Theatre in Oakbrook, Illinois.

With an adaptation by Ken Ludwig (“Lend Me a Tenor,” “Crazy for You”), which adds humorous touches to the story but remains faithful to Christie’s novel, along with terrific direction, talented designers, and an exceptional cast, this new take on Christie’s engaging story makes for an intriguing and compelling production.

If begins with a tale of the very young Daisy Armstrong, who was kidnapped and murdered. The man responsible never paid for his crime, and a number of people are seeking justice. To that end, they come together on the luxurious Orient Express train. The story then unfolds as Samuel Ratchett, the man who supposedly committed the murder of the child, is stabbed to death.

Among the passengers on the train is Hercule Poirot, the legendary Belgian detective; he’s on his way to London and just happens to be in the right place at the right time to solve the ghastly murder. It’s not a cut-and-dried mystery, though: He is faced with internal conflict as his emotions pull him one way while his devotion to justice pulls him in the opposite direction.

In addition to the Story

With a masterful directorial touch by Jessica Fisch, the show does make one substantial change. The 12 suspects from Christie’s original story are trimmed down to 8. Furthermore, while Fisch does a nice job of adding comic moments, she is careful to balance the humor with the mystery, leaving the cliffhanger moments intact.

While the story itself is intriguing, a fascinating aspect of this production is the way in which the impression of a train moving through Europe is presented. Scenic designer Andrew Boyce does a remarkable job of suggesting the atmosphere of train travel in 1930s, complete with a moving stage in which one can almost feel the motion of clacking wheels, hear the sound of screeching brakes and high-pitched train whistles, with the huffing and puffing of a train engine, provided by sound designers Mikhail Fiksel and Jeffrey Levin (also the music composers).

The lighting design by Paul Toben also adds to the show. The opening scene plays like a black-and-white documentary, which then is transformed to color as the story moves from yesteryear to the present. Enhancing the suggestion of travel are lights that shine from within train compartments, swirling snow we see through the windows, and Anthony Churchill’s fascinating projections of the luxurious train moving across a continent.

The highlight of the show, though, that which brings it all together and makes it work, are the great performances by an extraordinary cast.  The production r Larry Yando ises and falls on the actor portraying Hercule Poirot, and there’s no doubt that Larry Yando is the perfect choice to play the eccentric detective. Indeed, Yando is one of the most mesmerizing actors in the Chicagoland theater scene, and is such a magnetic performer that one hangs on his every word.

Also contributing outstanding character portraits are Sean Blake as Monsieur Bouc, who is Poirot’s Watson to whom clues are constantly explained; the exceptional Keith Kupferer as the American gangster Ratchett; Sam Boeck as Hector MacQueen, Ratchett’s assistant; Diana Coates as the elitist Countess Andreny; and Peggy Roeder as the Princess.

Even if you already know how the mystery ends, this is such an extraordinary and suspenseful production that you’ll be sitting at the edge of your seat throughout. And if you’ve never seen the enthralling “Murder on the Orient Express” before, be prepared for the escapist thrill of the year.