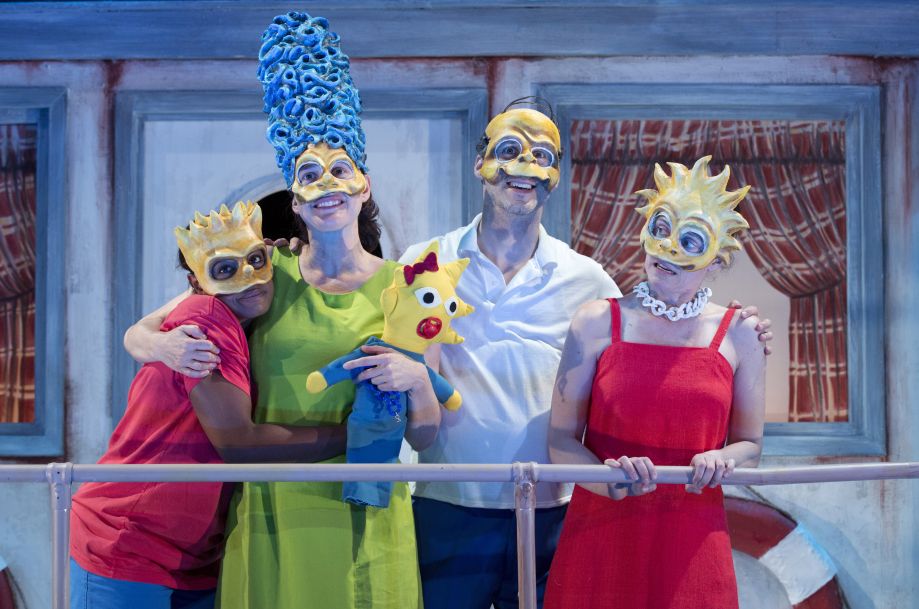 NEW YORK—The importance of escapist entertainment probably first occurred to humans around the time they realized the power of laughter. The ability to lose themselves in something completely inane is a welcome diversion from the harshness and heartbreak of reality.

Playwright Anne Washburn explores this idea in her work “Mr. Burns, A Post-Electric Play,” now having its New York premiere. Unfortunately, Ms. Washburn is so wrapped up in delivering this message that she neglects to give those chosen to put forth this idea any depth of humanity.

Things start off promisingly, somewhere near the northeastern seaboard of the United States, which has been hit by a terrible disaster. Exactly what has happened is never made clear.

The aftereffects, however, include nuclear power plant meltdowns, severe illnesses, a breakdown of government services and—most telling of all—a complete collapse of the U.S. electric grid, plummeting the entire country into a figurative and literal darkness.

In the midst of this uncertainty, a group of people holed up in a makeshift camp describe an episode of the animated TV series “The Simpsons.” They recite lines from the episode, explore specific character motivations, and tie the situations presented in that tale to other cultural references.

As this extended sequence continues, the outside world begins to intrude via imagined sounds coming from the darkness until finally a stranger (Gibson Frazier) wanders in and begins to tell of his travels.

His is a tale filled with rumors and secondhand information, yet it is devoured by the others in the camp. They are desperately anxious for news, yet fearful of what they might hear.

However, rather than exploring exactly what happened to the country or offering a closer look at the people involved, the action jumps to seven years into the future.

The group, still together and with at least one new face (Quincy Tyler Bernstine), is now performing actual “Simpsons” shows for live audiences, complete with commercials. It competes with other groups or syndicates who put on their own episodes from that series.

Washburn does drop numerous hints about what’s happening in this new world via a discussion on the importance of making cartoons relevant to the current situation or letting them stand as simple entertainment.

There’s a powerful moment in regard to everyone’s memories of the death and destruction they all witnessed, something they desperately try not to think about. There is also a reference to the re-emergence of human nature once the initial need to simply survive has passed.

This last point covers such matters as greed and the age-old battle between those who can afford to pay for what they want as opposed to those who can’t.

Yet because the story keeps coming back to extended explorations and deconstructions of “The Simpsons,” any attempt to connect to the characters or the underlying messages of the show is continually lost—the characters are given almost no backstory or personality of any type.

The show is far longer than it needs to be and could be cut without sacrificing what the playwright is trying to express. Indeed, reducing excess verbiage and sequences and trimming various commercial jingles, the show’s opening sequence, as well as most of the third act, could have helped to bring the entire tale into much sharper focus.

The cast is adequate throughout, though no one really stands out. The direction by Steve Cosson is hampered by the material—though Cosson’s potential, like that of Washburn’s, shows through at moments.

This is particularly true in the opening scene, where the basic premise is nicely set up with an appropriate accompanying atmosphere before the show gets too caught up in what it’s presenting rather than why it’s being presented.

Full disclosure: This writer has never had anything more than a passing interest in “The Simpsons.” Thus, for me it starts off with an interesting premise but ultimately fails to deliver more than a few chuckles and some oversimplified lessons on reality versus escapism. Those enamored with that series, particularly those who can quote lines, passages, and character history from the show, may find “Mr. Burns, A Post-Electric Play” more to their taste.