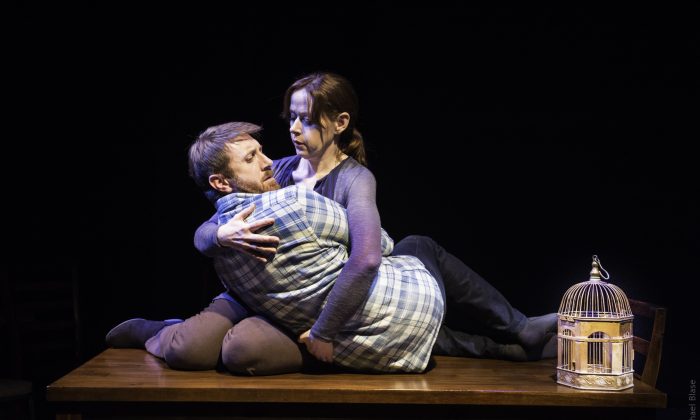 David (Craig D'Amico) has Alzheimer's and his wife Kay (Jennifer Rau) tries to cope with what that means on a daily, in “Mourning the Living.” (Michael Blasé)
Arts & Culture

A topic worth broaching
By Diana Barth

NEW YORK—Mickele Hogan’s “Mourning the Living,” now at the Dorothy Strelsin Theatre, deals with a crucial issue that has seldom been dealt with in a drama: Alzheimer’s disease, which affects over 5 million people who suffer from it and over 15 million who care for them.

In the play, Kay (Jennifer Rau), a high school teacher, has embarked on a romance with the school principal, Jerry (Chris Bolan). The relationship, which has been progressing smoothly, hits a snag when Jerry discovers that Kay appears to have an odd roommate—a man.

Kay admits that the man is her husband, David (Craig D’Amico), although she insists that he has been her husband in name only for some time. David has Alzheimer’s and doesn’t even know who she is. However, an element of uncertainty has now intruded into her relationship with Jerry.

David is really too much of a handful for Kay to care for by herself; he often has illogical fits of rage and must be persuaded to take care of even his most basic human needs.

But Kay has been fortunate in enlisting the aid of a neighbor, Marie (Mary Leggio), who has recently suffered a severe personal loss and is only too happy to give her time to care for David, enabling her to take her mind off her own problems.

Before Jerry entered the picture, things had been going smoothly, when the two men meet, hitherto squelched feelings arise in David’s consciousness. David realizes that Kay is someone he had been very close to, and at a dinner party, he erupts violently, accusing Jerry: “You’ve taken something from me! Give it back!”

With the conflict out in the open, a love triangle emerges, possibly creating an insoluble situation.

According to Marie, Kay should honor her marriage vows: to care for and cherish her husband “in sickness and in health.” Now Jerry, finally reaching the end of his tether about being the odd man out, so to speak, must make a decision.

To complicate matters, David occasionally begins to show moments of lucidity and even affection, alternating with the withdrawal symptoms of the disease. Kay is thrown into turmoil. Where does her deepest loyalty lie?

She refuses to put David into a home for Alzheimer’s patients; she could not do that to her beloved husband. At the same time, how can she fulfill her own needs for companionship, affection, and emotional support?

The fictional Kay’s experiences are undoubtedly based in truth. The Alzheimer’s problem is one that has not been addressed sufficiently in this country. For close to 15 years, there have been no new approved treatments for the disease.

In addition to the play’s engrossing content, the performances are very good, particularly in the case of Jennifer Rau, who is onstage for the entire 80 minutes. I have one caveat, however: I was puzzled by her consistently matter-of-fact delivery, particularly in the early vis-à-vis with Jerry, when she had the opportunity to take a more intimate tone. I would assume, however, that this was director Alan Souza’s choice.

Some lightness is brought with a scene including a student of Kay’s, Catherine (Caroline Aimetti), who inadvertently pays a visit to Kay, having gone a bit astray during a class party.

The small venue, a typical black-box with a stage the size of a large living room, was an ideal choice for this play. The audience is tightly placed on three sides of the stage, making for an appropriate sense of intimacy.

There are no set pieces aside from a rectangular table with four chairs, placed on a figured rug. Souza has opted for no props; all physical action that would ordinarily require props is mimed, drawing one’s attention solely to the words and actors.

The stark but appropriate lighting is by Patrick Bakalli; costumes are by Kelly Le Vine.

“Mourning the Living” is a valuable addition to what are often referred to as “problem plays,” dealing with important societal issues.