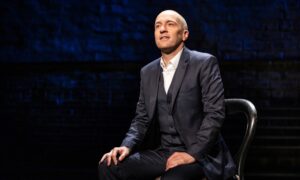 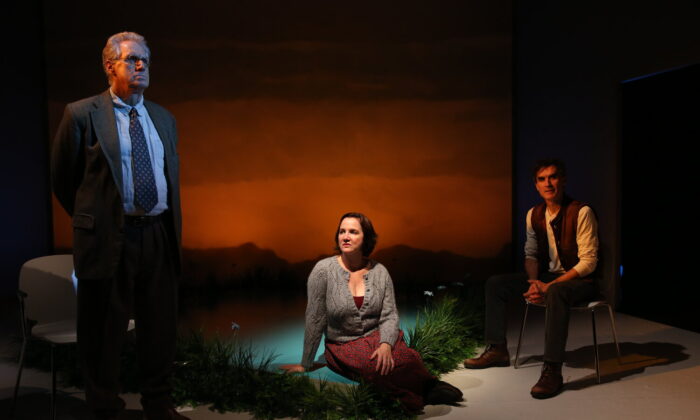 Not all wishes should come true
By Judd Hollander

NEW YORK—Just because something can be done, doesn’t mean it should be. Playwright Brian Friel makes clear this point in his bittersweet 1994 play “Molly Sweeney,” currently being revived by the Keen Company at Theatre Row.

Molly Sweeney (Pamela Sabaugh) is 41 years of age and lives in Ballybeg, Ireland. She works as a massage therapist in a health club, has many friends, and has been married to her husband, Frank (Tommy Schrider), for a little over two years. She is also unable to see, having lost her sight when she was 10 months old. Though still able to detect the difference between light and shadow, she is, for all practical purposes, blind.

Molly is content with her life. She often feels she understands and experiences the world much more intensely than sighted people.

However, her condition doesn’t sit well with Frank. Currently unemployed, he spent his youth traveling abroad, getting involved in various projects and get-rich schemes. He is what can be described as a restless soul and has an innate desire to fix things.

He wants to find a way to restore Molly’s sight, which he is sure is the right thing to do. Though, he never seems to ask Molly what she thinks about this.

Frank’s quest leads him to Mr. Rice (Paul O’Brien). Once an ophthalmologist with a bright future, Rice suffered an immense personal upheaval after his wife left him. Since then, he has learned to depend too much on alcohol, thus derailing his career. This is the reason he ended up working in a regional hospital in Ireland.

In Molly, Rice sees a chance at professional redemption and earning the respect he craves from his colleagues—if the operation on Molly’s eyes proves successful. Though, success is a relative term. Rice warns Molly that the best they can hope for is a partial restoration of her sight.

After the operation, Molly finds herself facing an entirely new set of circumstances, as she has to learn “how to see.” She is so used to functioning with only four senses that the introduction of the fifth, no matter how impaired it may be, fundamentally changes the way she perceives the world. It becomes a world that she increasingly no longer feels a part of, and one in which no one is able to reach her.

With “Molly Sweeney,” Friel offers the warning to be careful what you wish for, as what may start out with the best intentions by some, can turn ultimately tragic when applied to others.

The play also makes perfectly clear how there are times when is it important to say “no” to what others want you to do, and instead put your own needs first.

The work is told as a series of monologues, with each of the characters relating events as they remember them. The different viewpoints eventually come together to offer a complete picture of what has transpired. What’s striking is the layer of details Friel has included for his characters, such as the relationship between Molly’s parents and why she was never sent to a school for the blind.

Also compelling is the fact that neither Frank nor Rice are merely self-serving. Though they each want Molly to be able to see for their own reasons, they are both—like Molly—fully formed individuals whose stories we want to understand.

Sabaugh is excellent as Molly. She shows the changes she feels after the operation not so much as turmoil, but rather as an ever-growing incompleteness. She used to be able to identify flowers, as her father spent hours with her in the family garden when she was a child, teaching her to identify different specifics by touch and smell. But Molly is unable to call upon these senses when she tries to see the flowers with her eyes.

Schrider does a good job in showing Frank as a caring individual, yet never completely happy unless he has a cause to champion. Highly intelligent, the character explains such concepts as engrams and the internal clocks of Iranian goats. Schrider’s final speech shows both how much and how little has changed for his character.

O’Brien works well as Rice, the most tormented character of the three and the one who learns the most in the play. He comes to like Molly very quickly and truly tries to help her, though he eventually realizes the accolades he eventually receives are not the ones he wants.

Wonderful in its execution, “Molly Sweeney” offers a heartbreaking tale of hope, regret, and ultimately moving on.