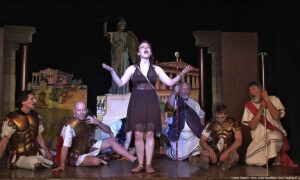 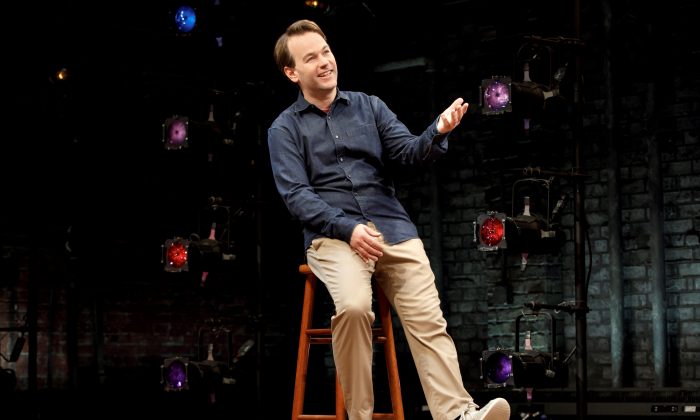 NEW YORK—Mike Birbiglia wants to talk to you about his couch. Well, not only about that. Although how this inanimate piece of furniture becomes a quasi-sentient longtime companion does serve as the starting point for “The New One,” Birbiglia’s hilarious, intimate, and very heartwarming one-man Broadway show.

“The New One,” as quickly becomes obvious, is all about lifestyle change. Specifically, what happens when a person, in this case Birbiglia, who’s never wanted to become a father, is suddenly faced with the possibility of starting a family.

His wife says to him at one point, “A baby wouldn’t have to change the way we live our lives.” Of course, as the show makes clear, having a child, by necessity, changes everything. And audience members who nod and laugh throughout as this idea is explored are undoubtedly recalling their own experiences in this regard—or at least have been close witnesses to others who had to make such adjustments.

One moment that particularly connects with the audience occurs when Birbiglia recalls a time he was staying with his brother and suggested the two go out for the evening. His sibling responded empathetically that he couldn’t because, “I have kids.” Perhaps Birbiglia exaggerated the incident in its retelling. However, one cannot deny its basic truth.

The first thing you realize with Birbiglia is that he’s not only a comedian; he’s also a master storyteller, with a delivery that’s part “aw, shucks” and part matter-of-fact. The effect is akin to slowly unwrapping a present. Birbiglia adds layer upon layer of background information until the point is suddenly revealed.

Almost every line and scenario is a setup to a comical put-down or wry affirmation, often with himself as the punchline. For example, although he’s the so-called man of the house, it doesn’t always guarantee getting his way in the decision-making process.

It’s important to note that Birbiglia doesn’t stick only to elements that are funny or light. He also touches on some rather serious subjects: how, for example, he sometimes felt like the odd person out when his household was increased by one. Birbiglia also explains his wife’s point of view during pivotal moments—perceptions that are not always the same as his.

This everyman way about Birbiglia is visible in his attire. It consists of what someone would wear about the house on a day he wasn’t going anywhere: comfortable, and just a bit unkempt.

Another way he endears himself to the audience, and thus makes us want to follow along on his journey, is that he doesn’t try to pass himself off as someone with all the answers. Rather, he himself is learning some important life lessons as the piece unfolds.

Seth Barrish’s direction is spot-on, allowing Birbiglia to move about the space and describe incidents in the story, ranging from life on the road to certain nocturnal habits born out of necessity. Barrish also keeps Birbiglia reined in just enough to ensure that nothing presented goes over the top into self-parody.

The scenic design by Beowulf Boritt, basically the backstage area of a theater, works quite well, offering a combination of fantasy and reality, which perfectly matches Birbiglia’s tale.

“Mike Birbiglia’s the New One” starts off with a simple point and ends up being an involving experience. It’s a touching journey that will have you smiling from the very first moment to the last.