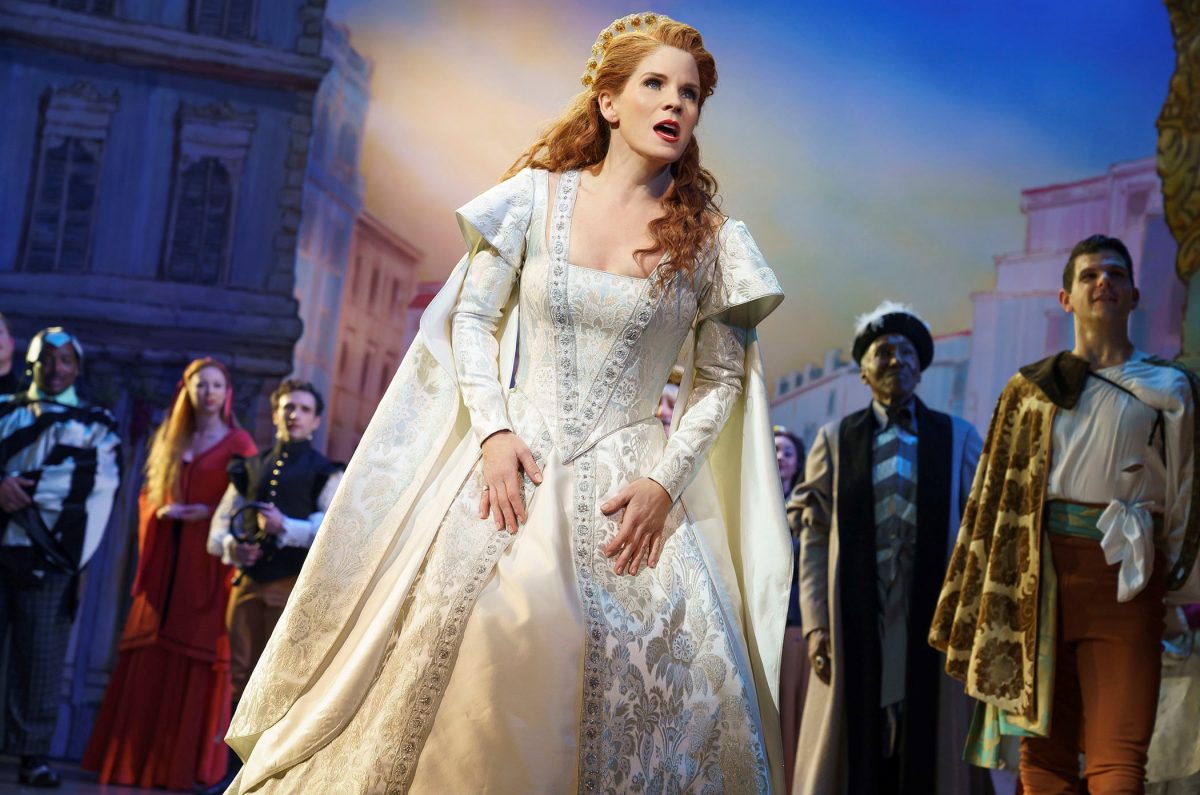 Not perfect but thoroughly enjoyable
BY Judd Hollander TIMEApril 16, 2019 PRINT

NEW YORK—“Kiss Me, Kate,” one of the most beloved shows in the musical theater canon, makes a welcome return to the Broadway stage at Studio 54 as presented by the Roundabout Theatre Company.

Set in 1948, the somewhat bombastic, totally egocentric actor-producer-director Fred Graham (Will Chase) is about to present his latest theatrical production: “The Shrew,” a musicalization of William Shakespeare’s “The Taming of the Shrew.”

The show is taking its first hopeful steps toward Broadway with an opening in Baltimore. Playing the male lead in the show-within-a-show, Fred has chosen as his co-star Lilli Vanessi (Kelli O’Hara), a woman whose talent is without question. Lilli’s presence in the show is enough to attract financial backers to the project.

However, Lilli is just as well-known for her hair-trigger temper and diva-like attitude. These qualities caused the film studio to which she was under contract to fire her.

Fred and Lilli also have a volatile personal history. Formerly husband and wife, the couple’s marriage did not end well. Indeed, it’s not long before old hurts and new misunderstandings set them at each other’s throats. At one point, Lilli receives flowers that Fred intended for another actress in the cast—Lois Lane (Stephanie Styles).

Further tension backstage springs from the on-again, off-again romance between Ms. Lane and company dancer Bill Calhoun (Corbin Bleu), a fellow with a weakness for gambling.

When a fuming Lilli plans to walk out of the show and leave the theater forever to marry her fiancé Harrison Howell (Terence Archie), a military man with major political ambitions, Fred finds himself at wit’s end.

If that weren’t enough, he also has to contend with two local mobsters (John Pankow and Lance Coadie Williams) who come calling about a certain debt.

It’s the way the show’s creative team chooses to address these issues that makes almost everything so enjoyable. For while the entire show is basically a love letter to the world of the theater (as well as blessed with a brilliant score and book by Cole Porter, and Sam and Bella Spewack, respectively), “Kiss Me, Kate” is, at heart, a show about compromise and learning to properly focus one’s desires—that and the ultimate belief love will win out, for this is a show populated with characters who may just find that the needs of those nearest and dearest coincide with their own far more closely than first expected.

The Roundabout’s Artistic Director and CEO Todd Haimes refers to the production in the program notes as one “that resurrects all of the magic of its 1948 premiere while rising to the responsibility of a 2019 revival.”

One way the company has modernized the production is to soften some of the musical’s so-called “battle of the sexes” elements. They removed a spanking sequence and altered a few lines here and there, with the apparent approval of the various estates.

They’ve also made some adjustments to a climactic scene, which works beautifully.

Where the show does falter a bit is with the two leads, both of whom are supposed to be larger than life. O’Hara is able to make Lilli work for the most part, but Chase never really rises to the occasion as Fred. His portrayal is neither interesting enough to be endearing nor exaggerated enough to be outrageous.

That said, while in his “Shrew” persona (as Petruchio), Chase plays his scenes perfectly. He comes off as a scoundrel with a twinkle in his eye and a song on his lips. He’s particularly effective in the numbers “Where Is the Life That Late I Led” and “I’ve Come to Wive It Wealthily in Padua.”

As her “Shrew” character Katherine—”Kate” of the title—O’Hara does a fine job in such numbers as “I Hate Men.”

The supporting performers come off better thanks to some high-voltage dancing and the absolutely superb choreography by Warren Carlyle, which never once disappoints.

Styles is excellent as a sweet-faced girl, who definitely did not just fall off the turnip truck, as seen in the wonderfully comic “Always True to You in My Fashion.”

Meanwhile Bleu does some impressive dancing throughout and shows great chemistry with Styles, especially in “Tom, Dick, or Harry” where, in Lois’s “Shrew” persona of Bianca, she struggles to choose between her various suitors.

Stopping the show is a spectacular rendition of “Too Darn Hot,” a number that opens Act 2. James T. Lane particularly does a fantastic job here, as does Adrienne Walker, who powerfully delivers all the right notes.

Other musical highlights include “Brush Up Your Shakespeare,” allowing Pankow and Williams to add a vaudeville touch to the proceedings, and “Another Op’nin, Another Show,” basically Porter’s personal salute to the theater and all who inhabit it.

While this version of “Kiss Me, Kate” is not completely perfect, most of the time it comes awfully close. Offering great entertainment for one and all, this is one show that should be on everybody’s “must-see” list.