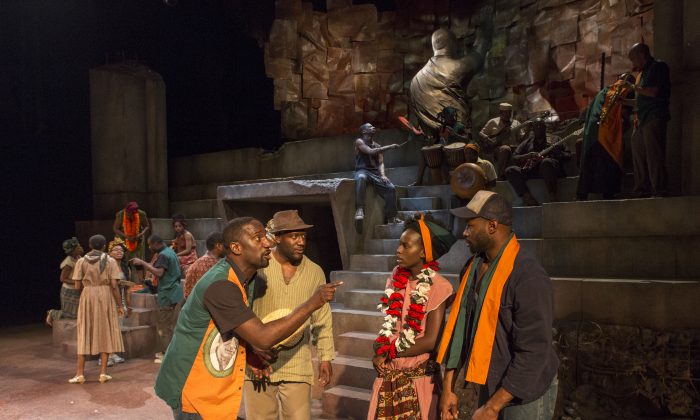 NEW YORK—The dangers of ambition are powerfully demonstrated in William Shakespeare’s “Julius Caesar,” the play currently seen in an absolutely riveting production by the Royal Shakespeare Company at the Brooklyn Academy of Music.

Presented here with an all-black cast and set in present day Africa, the work is every bit as timely now as when it was first written.

The Roman military leader Julius Caesar (Jeffery Kissoon) has returned home in triumph from a campaign abroad and is greeted by cheering throngs with the passion usually reserved for rock stars. This does not sit well with several members of the senate, the country’s governing body, who fear the people will proclaim Caesar king, ending the country’s republic and establishing a monarchy.

Among those most concerned about this is Roman Senator Marcus Brutus (Paterson Joseph). Aware of Brutus’s feelings, fellow Senator Caius Cassius (Cyril Nri) tries to enlist him in a plan to halt Caesar’s ascension once and for all. Although Brutus initially shows misgivings, he eventually concludes there is no other way to stop Caesar, and in fact, he ends up becoming the unofficial leader in this effort.

The play not only offers a powerful political lesson, but it’s also filled with warnings of trying to reach too high and the dangers of expecting others to have the same moral standards as you yourself have. For just because one person may have honorable intentions, there is no guarantee that others have the same high ideals.

This discrepancy in ideals is evident with the moral turmoil Brutus goes through. Wanting only the best for Rome, Brutus demands the same honesty from those who would remove Caesar as he does of Caesar himself. This becomes evident when, after Caesar has been dealt with, Brutus calls Cassius to task over some unsavory matters Cassius is involved in.

Joseph is magnificent as Brutus, brilliantly showing the internal conflict he faces and one which he is unable to share with his beloved wife Portia (Adjoa Andoh). A man firmly believing in the righteousness of his actions, Brutus’s every action brims with passion and purpose.

Joseph also shows Brutus to be a clever politician as he speaks to a crowd of angry and confused people and defends the actions taken against Caesar. Sometimes, though, Brutus’s sense of honor is sometimes misplaced, as when he allows Caesar’s loyal friend Mark Antony (Ray Fearon) to remain after Caesar is gone.

Fearon more than holds his own as Antony, the character being both a man of action and a master manipulator.

His speech at Caesar’s funeral drips with irony, sarcasm, and method as he successfully turns the people against Brutus, Cassius, and the rest of the conspirators by telling those assembled exactly what they want to hear and coloring events just enough to distort what Brutus had said previously. This fair-weather attitude of the common folk, who seem to shift allegiances with the latest turn of events, is another theme in the play.

Kissoon does a good job as Caesar, playing the character as more than a little arrogant and one who sets himself above the normal way of doing things. He’s also all too conscious of his public image, and while he feels his methods may be honorable, it’s his refusal to acquiesce to certain rules and heed certain warnings that ultimately lead to his undoing.

Nri works well as Cassius, a scheming man with a plan but also a bit of a coward, finding strength in numbers and in people with whom to share responsibility and blame. He is also enough of a realist to hope for the best but to expect the worst, which is why he’s one of the most vocal to protest Brutus’s gesture of mercy toward Antony.

Eugene Washington is good as Cicero, the senator who plays up to Caesar’s vanity, eventually using that vanity against him. Samantha Lawson strikes the right note as Caesar’s wife, Calpurnia, who has premonitions of danger against her husband. Theo Ogundipe is appropriately ominous as a Soothsayer who warns Caesar to beware of what is to come.

Director Gregory Doran does an excellent job with the somewhat lengthy text, allowing scenes of political maneuverings and ones of quiet contemplation to blend together nicely. This keeps the action moving and the story focused on the question of whether it’s best to risk all for what one believes if one is willing to live with the consequences.

Doran also manages to add a bit of humor to the proceedings every so often, as seen via Lucius (Ricky Fearon), a young servant to Brutus.

The various design work by Michael Vale is very good. The music by Akintayo Akinbode was also very enjoyable.

Expertly performed and staged from start to finish, this production of “Julius Caesar” is a winner on every level.