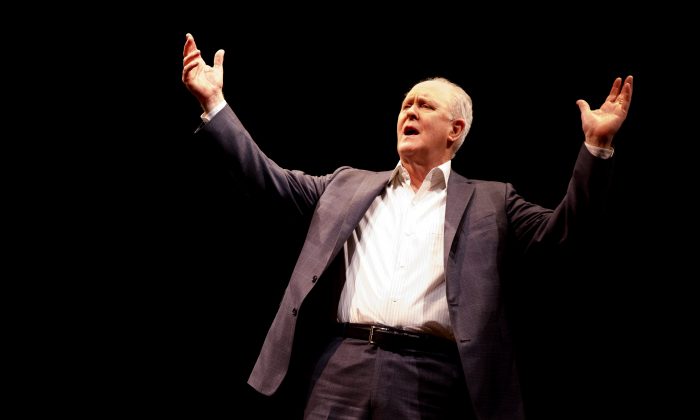 NEW YORK—All theater tells stories and all actors are storytellers notes John Lithgow in his one-man Broadway show “Stories by Heart.” Lithgow, in an absolutely sterling performance, uses the classic art of storytelling to take the audience on a journey through his own past, while also showing just how transformative the power of the spoken word can be.

Stories have a special place in Lithgow’s heart thanks to his father, Arthur Lithgow. An actor, producer, director, and teacher, he is the main reason his son became an actor himself. Particularly enamored with Shakespeare, the elder Lithgow founded a number of theater festivals over the years, including The Great Lakes Theatre Festival, which is still going strong today.

One of Lithgow’s strongest childhood memories, other than getting to see “Titus Andronicus” (one of Shakespeare’s bloodier works) at the tender age of 8, was his father’s practice of reading bedtime stories to his children. The stories came from a 1939 collection of works called “Tellers of Tales,” which his father would act out as he read, making the characters and plots come alive for his listeners.

Lithgow presents two of these tales, noting that he is putting onstage what he himself envisioned while listening to his father all those years ago. “Haircut,” by Ring Lardner, is a 1920s story of small-town life, which soon turns sinister. Lithgow takes on the role of the town barber describing his recollections of some of the town’s citizens to an unseen customer. The barber’s words eventually indicate something much darker, which he refuses to acknowledge. Watching the performance, it’s not long before one feels pulled into the story.

Act 2 focuses on more recent events, as Lithgow recounts how he became the primary caregiver for his parents in the last years of his father’s life. Lithgow also takes over the role of family storyteller and uses P.G. Wodehouse’s 1935 comedic tale “Uncle Fred Flits By” to help his ailing father forget his own situation for a while and be transported someplace else entirely. With gusto, Lithgow acts out the story of a visiting relative and the chaos he brings upon his hapless nephew, making the audience roar with laughter.

Both “Haircut” and “Uncle Fred” have a special charm as narrative layers are peeled back: Each new bit of information leads to another turn in the plot and reveals some previously unexplored character or event, which in turn offers still another direction the story might lead to.

One can’t help but notice the symmetrical structure of the two acts. The first shows a father entertaining his children with stories, using them to excite their imaginations and introduce them to worlds and places. The second act reverses the process as the now-grown son reintroduces his parents to the wonders they once helped impart to others.

Lithgow, who has been developing this labor of love for a number of years, makes for a genial and engaging host. He throws himself full force into making the two stories come wonderfully, and at times, hysterically, to life. He also peppers the performance with a few self-deprecating comments, such as how he became the caregiver for his parents because, out of all his siblings, he was the only one not working at the time. “I was between engagements,” he says.

Daniel Sullivan’s direction allows Lithgow to take the audience members exactly where he wants them. The entire presentation is intimate; we quickly feel we’re the only person in the room. Never do the stories or Lithgow’s personal recollections go so far afield that the desired effect is destroyed. (However, there are times in the Wodehouse tale where Lithgow gives The Minister of Silly Walks a run for his money.)

John Lee Beatty’s drawing room set, with only an armchair, a table, and a few props, offers a stately yet not at all impersonal atmosphere. Kenneth Posner’s lighting also helps project the proper mood for the situations explored.

Congenial, involving, and totally entertaining, the Roundabout Theatre Company’s “Stories by Heart” shows the lasting emotional resonance a really good story can have, especially when it means something very special to the person doing the telling.