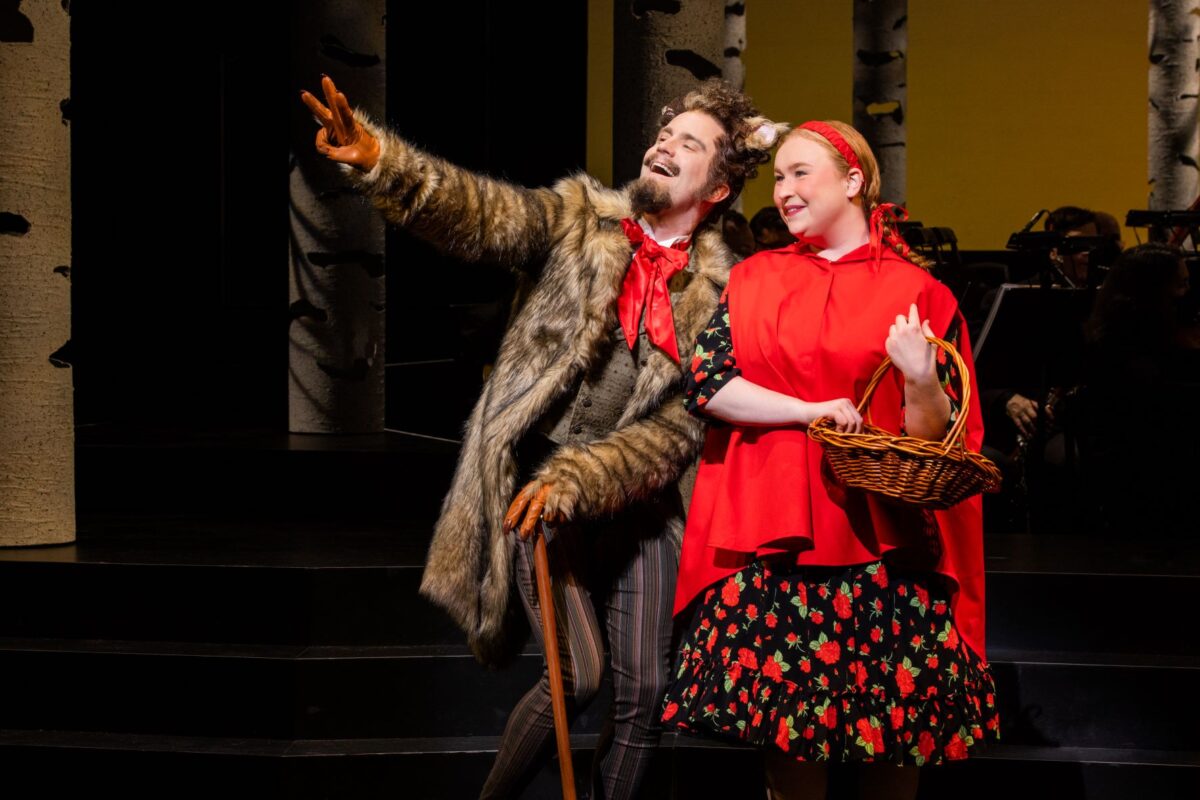 Gavin Creel as the Wolf and Julia Lester as the girl in red in “Into the Woods.” (Matthew Murphy and Evan Zimmerman)
Performing Arts

Theater Review: ‘Into the Woods’: What Happens When You Get What You Wish For?

NEW YORK—Every action has consequences, even if those consequences may not be felt until years later. This is the underlying message in the 1987 musical “Into the Woods,” as Stephen Sondheim (music and lyrics) and James Lapine (book) examine just what happens after “happily ever after.” This latest revival is moving to Broadway after a brief run at the Encores! concert series.

Mixing the ominous with the whimsical, the story takes place in a far-off kingdom whose inhabitants include a Baker (Brian D’arcy James) and his wife (Sara Bareilles). The couple’s greatest wish is to have a child, but they have been unsuccessful due to a witch’s curse.

This in retaliation for the Baker’s father  stealing numerous greens from the Witch’s garden years earlier, along with some very powerful magic beans. The Witch (Patina Miller), who has also suffered since the theft, now offers the Baker a way to end the curse, an effort which will take him deep into the vast woods that surround the kingdom. Determined to do just that, the Baker soon sets off, leaving his protesting wife behind.

As it turns out, the Baker is not the only one in the woods this night. The audience is soon greeted by the sight of a girl (Julia Lester) in a red hood on her way to visit her ailing grandmother (Annie Golden); a boy (Cole Thompson) taking his beloved cow to market; a Prince (Gavin Creel) trying to track down a beautiful woman (Phillipa Soo) who attended a festival in his castle; and another Prince (Joshua Henry) who has fallen in love with a Lady (Alysia Velez) with long blonde hair imprisoned in a foreboding tower. The entire first act is basically a mash up of various fairy tale characters and storylines.

Each of the characters presented is searching for something that can give their life meaning, be it love, fulfillment, food, fame, or fortune. After a few twists and turns, most of the characters get exactly what they desire. Or so they think. As the story moves into the much darker Act 2, many begin to realize what they thought they wanted isn’t what they truly need.

“Into the Woods” contains storylines and situations everyone can relate to, with some issues more topical today than when the show was first presented. Lapine’s book features neglected wives, overbearing mothers, step-mothers, and step-sisters, along with those yearning to break free from familial restrictions.

The one common theme through it all is how one’s intentions don’t always turn out as planned, such as when the Witch tries to keep her daughter safe from dangers of the outside world by locking her in a tower; or how a boy’s desire for wealth may lead to the undoing of an entire kingdom. Though the end may indeed justify the means, as noted by the Baker’s Wife, one must eventually answer for their part in how they achieved those ends.

Miller is excellent as the Witch, a character who also comes to embody the phrase “beauty is only skin deep,” for any change in her appearance fails to alter the person inside. Bareilles gives a nice earthy quality to the Baker’s Wife, a woman whom her husband depends on more than he knows, and the glue which holds their marriage together.

James is fine as the Baker, a hard-working everyman and one of the characters who matures the most by story’s end.

Soo is nicely appealing as Cinderella, who comes to realize that life is best lived on one’s own terms. David Patrick Kelly is enjoyable as a Mysterious Man who knows far more than he lets on. Joshua Henry and Gavin Creel are wonderfully over the top as the princes. Creel also does a good job in the role of the Wolf.

Sondheim’s score, with its jaunty title tune, is excellent, as are the orchestrations by Jonathan Tunick. A wonderful comic highlight is “Agony,” a duet by the Princes as they dream about what they are unable to obtain. Creel, in particular, turns in an exquisitely hilarious performance.

Some of the numbers with more somber overtones include “Children Will Listen,” a warning about the power and the danger of words; and “So Happy,” where several of the characters begin to realize the seemingly perfect life they have achieved is not as perfect as they once thought, particularly when one realizes they have nothing in common with their significant other.

The various costumes give off the appearance of an expansive color tableau, all beautifully designed by Andrea Hood. One area where the show is a bit lacking is the sets. As this was originally a concert production, there was not that extensive a set to speak of, but scenic designer David Rockwell’s efforts come off well and is able to nicely convey a feeling of both wonder and foreboding when it comes to the showing the woods of the title.

A tale about how achieving your wildest dreams may not always be such a good idea, “Into the Woods” makes for delightful end-of-summer entertainment.