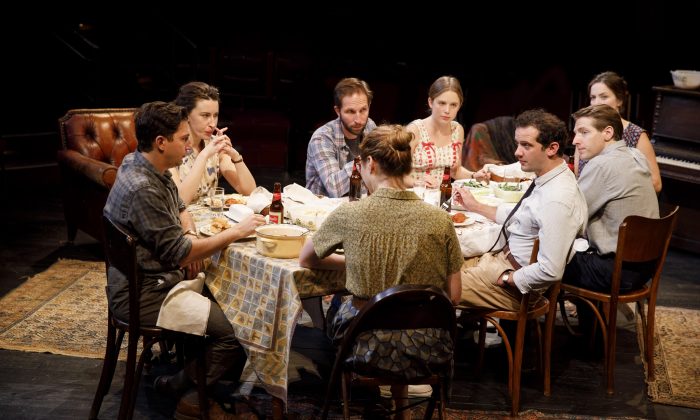 The company of “Illyria,” written and directed by Richard Nelson, at The Public Theater. (Joan Marcus)
Performing Arts

Birth pangs of a theater festival
By Diana Barth

NEW YORK— A visit to the Public Theater, a later offshoot of the Shakespeare Festival and located in a former public library downtown, can’t fail to thrill, as one waits among a milling crowd in the lobby and the announcement is heard to take one’s seat for a performance at one of several plays simultaneously presented.

Many New Yorkers take for granted the presence of the free annual summer theater festival in Central Park, known as the New York Shakespeare Festival. Few are aware of the behind-the-scenes struggles that went into its creation.

The leading figure in “Illyria,” a play about that very creation, is the scrappy Joe Papp (John Magaro), the intense, dedicated theater man who took on politicos, broadcast executives, and the House Un-American Activities Committee to make his dream a reality.

Richard Nelson latest play has made the audience into flies-on-the-wall, sitting in on a series of imagined conversations between the movers and shakers who accompanied Papp on his passionate journey.

Nelson, who also directed this work, has created three long scenes—conversations really—between Papp and his confederates.

Much time is devoted to the casting of Olivia in Shakespeare’s “Twelfth Night,” which is puzzling: why does this incident merit such importance in the overall work?  It does display the competitiveness between Papp and his director, Stuart Vaughan (John Sanders).

Vaughan wants Mary Bennett (Naian González Norvind) for Olivia, Papp wants Peggy to get the role. Set back in 1958, Papp’s then-wife, Peggy (Kristen Connolly), who has recently given birth to a baby girl, now wants to become active again as an actress.

So fierce is Vaughan and Papp’s battle that ultimately Vaughan bows out of that directing chore, and Papp himself takes over.

Interestingly, Mary Bennett’s audition for the role of Olivia was fine, whereas Peggy Pope’s reading seemed mediocre. Director Nelson seemed to be throwing his weight behind Vaughan’s preference.

In any case Vaughan, has made contact with a commercial theater, the Phoenix Theater, which pays good salaries, a bone of contention and jealousy among various members of Papp’s “team.”

Other cronies are composer David Amram (Blake Delong) who would like to emigrate to the world of financial support. But press agent Merle Debuskey (Fran Kranz) remains loyal through thick and thin, and later becomes a major Broadway press agent.

There is Joe’s friend, stage manager Bernie Gersten (Will Brill), who would later, with Papp, run the Public Theater, an outgrowth and result of the Shakespeare Festival.

Another support to Papp is Gladys Vaughan (Emma Duncan), who is both Stuart’s wife and Joe’s assistant. How she manages to prevent her two seemingly opposing roles from colliding is a tribute to her political savvy, according to Nelson’s script.

Colleen Dewhurst (Rosie Benton), here in her early years as a struggling actress, throws an informal birthday bash for Papp, and there mentions her intimate relationship with actor George C. Scott, a valuable actor-member of Papp’s group.

(Of Scott, a vibrant soul, to say the least, Vaughan remarks in the play that “you can’t direct Scott.” Scott’s presence would have made an interesting contribution to “Illyria.” But, then, who could be found to accurately portray such a larger-than-life character.)

Against the backdrop of apparently casual conversation are mentions of Papp’s appearance before the House Un-American Activities Committee, with whom he did not cooperate, leading to his being fired from his job as a stage manager at CBS-TV.

He also took on major city player Robert Moses, and ultimately won in his battle against the New York City Parks Department to keep admission to Shakespeare in the park free of charge.

Set designers Susan Hilferty (also on costumes) and Jason Ardizzone-West made excellent contributions, as did Jennifer Tipton for lighting.

Performances were excellent, although I found John Magaro’s Joe Papp attractive but too mild-mannered, lacking Papp’s well-known “bite.” (I met Papp briefly as a young actress. He came backstage to compliment my performance, and I was, of course, flattered, but also a bit intimidated by his intensity.) More aggressiveness in Magaro’s performance might have heightened the overall presentation.

But although not as theatrical as I would have preferred, the show is enticing to anyone who would enjoy knowing more about Joe Papp and his early contributions to New York City theater, which continue to affect theatrical life today.

All told, a remarkable legacy, sprung from the mind and driving ambition of one man, Joe Papp, and now, tangibly documented by playwright Richard Nelson, in his “Illyria.”