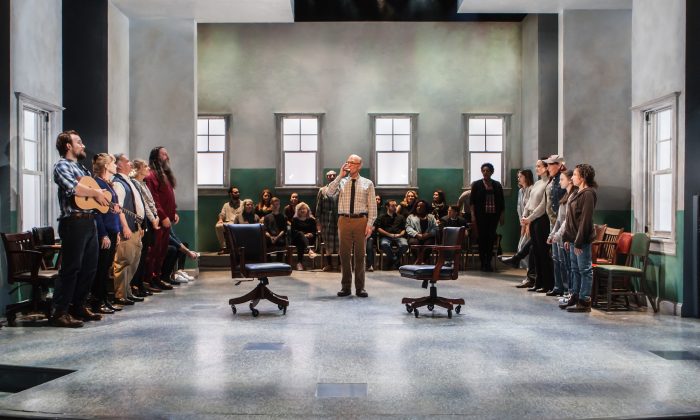 NEW YORK—Playwright David Rabe makes a triumphant return to the New York stage with The New Group’s presentation of  “Good for Otto” at the Pershing Square Signature Center. Inspired by Richard O’Connor’s book “Undoing Depression,” the drama offers a penetrating look at those who suffer from mental illness and at those who try to help them.

Dr. Robert Michaels (Ed Harris) is the chief administrator at the Northwood Mental Health Center, as well as a therapist. The pastoral surroundings of its location in the Berkshire Mountains of Connecticut stand in stark contrast to the issues playing out inside its walls. There, the perennially overworked staff accepts all who seek treatment, for at least eight sessions.

The patient Dr. Michaels is currently most invested in is Frannie (Rileigh McDonald), a 12-year-old girl who comes from a seemingly abusive home. Frannie’s increasing withdrawal from reality, as well her methods of lashing out (which include self-mutilation), is taking a toll on Nora (Rhea Perlman), Frannie’s foster mother. Nora wants to legally adopt Frannie but is finding herself at the end of her own emotional rope.

Dr. Michaels’s deep connection to Frannie stems from his own childhood trauma. His mother (Charlotte Hope) committed suicide when he was only 9, and she taunts him in his thoughts.

When the issues in his life, whether personal or professional, threaten to overwhelm him, Michaels uses a rather unique way of coping. He envisions a world in which the people in his life ease their pain by singing songs he learned as a child.

The inclusion of songs like “On Moonlight Bay” and “By the Light of the Silvery Moon” begs the question for the audience: Exactly how much of what we see is actually happening, and how much is just something in Michaels’s head?

Evangeline Ryder (Amy Madigan), a colleague of Dr. Michaels at the center, has her own group of patients. Barnard (F. Murray Abraham), for example, is a 77-year-old man who, for no apparent reason, no longer wants to get out of bed.

This scenario, as well as some of the stories about other patients, is presented, at least initially, as a way to offer comic relief. Barnard, at first pleasantly genial, becomes somewhat defensive as he undertakes a fascinating journey through layers of interconnected past incidents that finally all come crashing down on him.

As Dr. Michaels and his staff realize all too well, they cannot always help everyone who comes through their doors. Too often, the best they can hope for is to either set patients on the road to recovery or help preserve their sometimes tenuous status quo when it comes to reality. It’s also why, when a victory actually does come along, it becomes a great source of satisfaction—both to the doctors and to the audience.

There’s also a swipe at the way the financial end of the treatment process operates as seen via the center’s insurance carrier. The carrier representative (Nancy Giles) proves to be an expert in double talk, while absolutely refusing to put anything she says in writing. Her conservation with Dr. Michaels over what is and what is not allowable would be absolutely hilarious were it not so tragic.

Harris is perfect as a doctor trying to do the best for his patients, sometimes using his own demons to give him an insight into their pain. Madigan is fine as Evangeline, perhaps a bit more standoffish with her patients than Dr. Michaels, but no less caring.

Perlman is fantastic as a woman trying to care for the child she loves, while also attempting to hang on to her own sanity, and McDonald gives an excellent performance as a young girl who retreats to her own world in a desperate effort to find some sort of safety.

Abraham, meanwhile, offers what amounts to a master class in acting with his performance as Barnard.

Direction by Scott Elliott is masterful; he keeps the story moving smoothly throughout. From almost the first moment of the play, we feel that a violent situation may suddenly erupt.

With “Good for Otto” (Otto’s a hamster, by the way), Rabe has crafted a very affecting tale. Intense, touching, and at times heart-rending. The play offers an unflinching look at those for whom the smallest victory can be a major achievement.

Also in the cast are Kate Buddeke, Lily Gladstone, and Michael Rabe.