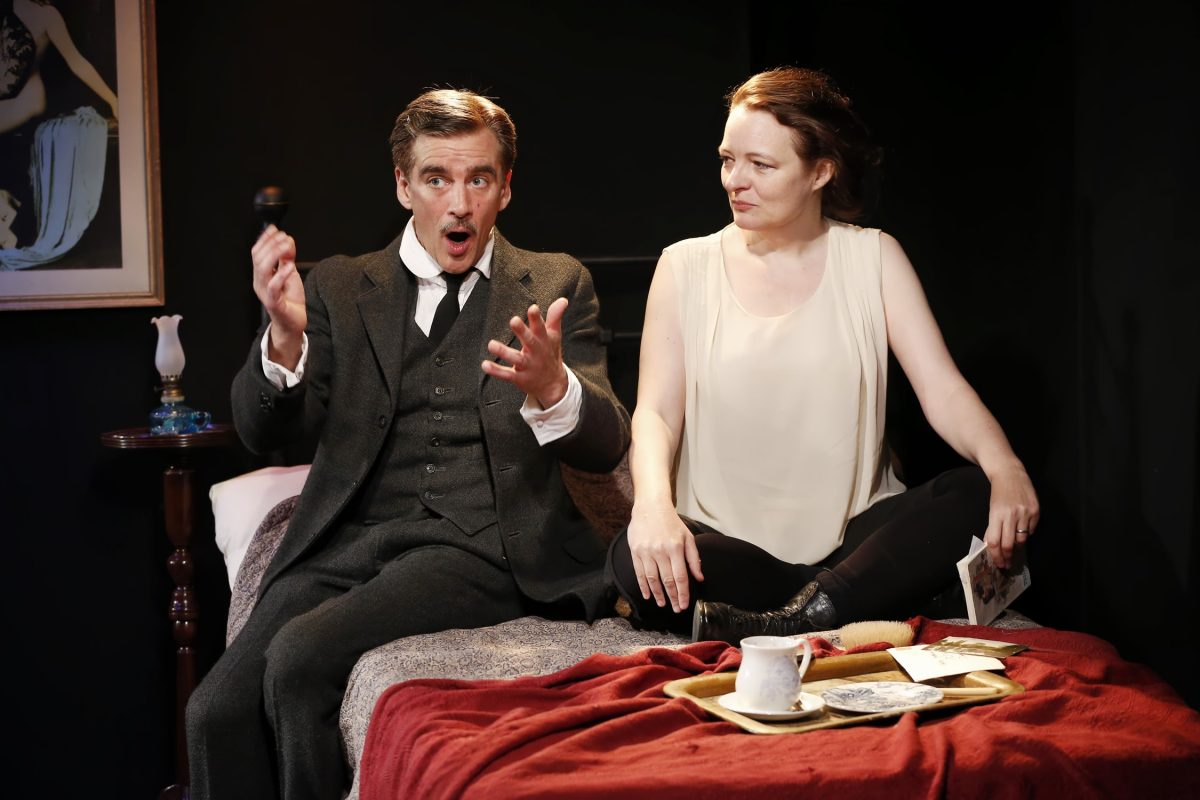 NEW YORK—Playwright and actor Patrick Fitzgerald has undertaken the yeoman task of writing “an adaptation after James Joyce’s Ulysses,” and it is remarkably successful.

Within the fiber of Joyce’s gigantic tome is the love story of its protagonists, Leopold and Molly Bloom. Ultimately leading to Molly’s well-known final monologue, which ends “Yes, yes, yes,” is the story of the sadness that has permeated their marriage for years, 11 years to be exact.

That decline began with the death of their son, Rudy, at only 10 days old. The couple has never recovered. Not only has Molly lost their second child—their daughter Milly, now 15, prospers nicely—but Leopold has lost the chance for an heir, for flesh and blood to carry on his name.

Further, that terrible loss has interfered with the couple’s relationship. “Things haven’t been the same since then,” Molly complains.

To hopefully repair the breech, Leopold (whom Molly calls Poldy), has agreed for Molly to have an intimate meeting that day with another man, Blazes Boylan, described as rather a crude sort. Poldy hopes that somehow such an encounter might make Molly more conducive to repairing their marriage, an arguably odd tack.

While awaiting the unusual visit, Leopold goes about the town performing various errands. He buys a few small items at the local pharmacy, including lemon-scented soap, which exudes a nice scent from his jacket pocket.

Odors figure prominently in Joyce’s work: Molly mentions violets and also roses, whether to have a yellow or a red one.

There is also music: Molly occasionally trills a brief phrase from one of the songs she often sings in recital, such as “Love’s Sweet Song.”

Both Molly and Leopold are sentimental and even poetic. They obviously share a deep love, and it is a pity that the sadness resulting from their earlier loss has permeated their relationship to the extent that it may fail.

In association with Rose on the Rood Productions, adaptor Fitzgerald has succeeded in preserving James Joyce’s gift for presenting a sense of the life in the city of Dublin, Ireland, of the early 1900s. Included are details of daily living, such as the food eaten. Leopold, for example, likes organ meats of animals: liver, heart, even kidneys. The more delicate Molly delights in simple toast with butter.

Enacted by only Patrick Fitzgerald and Cara Seymour, each plays several parts. Ms. Seymour swiftly dons a man’s bowler hat, for example, or a newsboy’s cap. She even plays Rudolph Bloom, Leopold’s father—a Jew born in Hungary—for Leopold is Jewish, somewhat of an oddity in Dublin. Molly had been attracted to him because of his somewhat exotic quality.

Under the fine-tuned direction of Terry Kinney (a co-founder of Chicago’s noted Steppenwolf Theatre), actor Fitzgerald does an excellent job of portraying Leopold Bloom (although he lacks the exotic quality referred to—he is all Irishman, but that’s a minor quibble). And it is a difficult acting task—close to two hours of almost constant emoting, during which Fitzgerald displays a winning theatricality. In fact, his style is quite different from that of his vis-à-vis, Cara Seymour.

Seymour is very good, but her style is down-to-earth naturalistic. She does succeed in making very specific changes from character to character, but one might wish for a more outwardly dramatic approach at times. It is very difficult to keep a two-hander afloat without emotional fireworks sprinkled throughout.

Special kudos goes to set and costume designer Sarah Bacon, who has made wonderful use of the Irish Repertory’s small downstairs theater space.

Although, at first, one sees only a bed on one side of the stage and a chair on the other, later, various discreet cubbyholes pop open on demand to serve as various locales. A lovely print of a famous painting The Bath of the Nymph hangs on the wall near the bed, as described in the script.

Overall, the production conveys a bittersweet ambience and a powerful sense of another time and place, arguably never to be recovered.