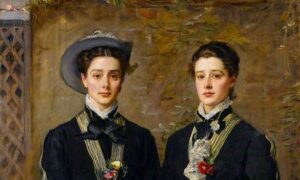 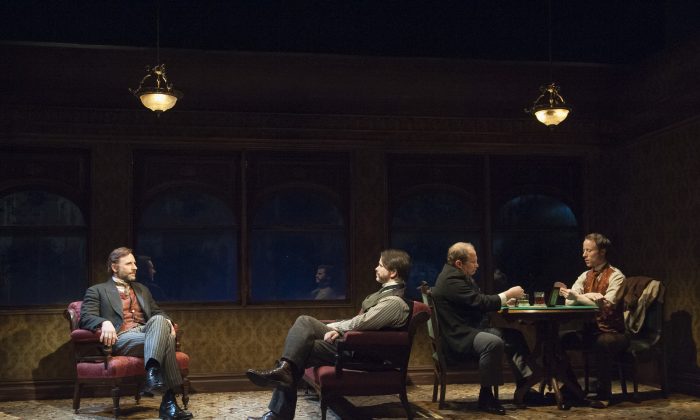 (L–R) Storyteller (Jordan Lage) relates a brush he had with the supernatural years earlier to a companion (Jason Ritter) while a card player (Jim Frangione) eavesdrops, disturbing his game with the dealer (Nate Dendy). (Ahron Foster)
Arts & Culture

NEW YORK—Since at least the time of the cave man, storytelling has held a universal attraction. We have images of people gathering around a fire as night falls, food cooking, or marshmallows roasting, while folks spin tales of mythical times gone by, adventures that happened that morning or real life mysteries still unsolved.

Listening to such tales helps fulfill our innate need to be a part of something bigger than ourselves and to share in a group experience with both friends and strangers. It’s a practice that is the genesis of literature, film, streaming television shows, old-time political speeches (at least those before the days of the 30-second sound bite), and even lawyers’ summations to juries.

If told well, a ghost story will be embraced by both the most devout skeptic and fervent believer.
Playwright David Mamet taps into these feelings and needs with his two one-act works now at Atlantic Theater Stage 2. The first, “Prairie du Chien,” powerfully uses what is arguably the most popular tale of them all—the ghost story.

If told well, a ghost story will be embraced by both the most devout skeptic and fervent believer. The one wants to puncture the tale with a cold splash of reality, the other to embrace it for showing there are things outside the normal world we can’t understand.

This particular tale is related on board a train traversing the wide-open spaces of 1910 Wisconsin at 3 a.m. All one sees out the window is the black of night, punctuated only by the sound of the train wheels hitting the tracks and the rocking of the cars from side to side. Good job by scenic designer Lauren Helpern and lighting designer Jeff Croiter in helping to create the appropriate atmosphere.

As the train moves on, a traveling salesman, also known as the Storyteller (Jordan Lage), relates a brush he had with the supernatural years earlier. It’s a tale of jealousy, infidelity, and murder, and those who witnessed it still bear the scars of what they saw.

The storyteller’s words reveal another common thread as it pertains to ghost stories: the survivor doomed forever to retell his tale.

At the same time, a card game takes place nearby. One of the players (Jim Frangione) occasionally finds himself trying to follow the salesman’s story, and the resulting distraction from the game is perhaps one of the reasons he’s losing so badly.

Most fascinating here is the quiet monotone of the Storyteller, who interweaves his recollections with tangents and asides about his own life. His words draw one into what is being said and create images of the events recounted.

Where “Prairie du Chien” allows the audience to be observers to events that happened in the past, “The Shawl” shows events unfolding as they are happening.

Set in a big city in the present day, a psychic named John (Arliss Howard) meets with Miss A (Mary McCann), his latest client. She’s trying to decide what to do regarding an upheaval in her family.

John’s approach intrigues this woman enough for her to want to continue their meetings. Yet John may not be all he seems. Calm and intelligent, he thoroughly researches his clients before a first session and then carefully observes them in a manner that would do Sherlock Holmes proud.

As a result, the convincing statements he makes seemingly out of thin air—such as knowing how someone is unmarried or might have a scar on their knee—actually all have basis in fact.

John sees his ability as a gift allowing him to help people by ultimately telling them what they want to hear, as he slowly builds a bridge of trust between himself and his client.

This process is shown by the seemingly interminable yet very deliberate slow start of the piece. The pace would never be accepted in just about any other storytelling medium today, since the audience is far too accustomed to a quick beginning, rather than this leisurely pace.

Tightly directed by Scott Zigler, the plays have an element of tension running throughout.
However, John’s approach is complicated by a would-be apprentice (Jason Ritter) living with him, who’s far more interested in the monetary side of things rather than the idea of helping people and being rewarded for any “good deed” further down the line.

Ritter’s character acts as the closet skeptic of the story. He continually asks questions, trying to reaffirm what is presented. But in the process he actually threatens to poke holes in it, and as a result, he becomes the one listener not fully touched by the experience.

Lage is excellent as the Storyteller, coming across as someone still haunted by what he experienced years before.

Howard is very good in “The Shawl,” with his quiet way of talking around a subject before getting Miss A to admit what he needs her to say in order to convince her that he’s been telling the truth all along.

McCann also does a good job with Miss A, with her character’s somewhat lost air and a desperate need to believe in something and someone.

Ritter works well in “The Shawl” as a young man in too much of a hurry to really appreciate events and the learning opportunity he has before him.

Tightly directed by Scott Zigler, with an element of tension running throughout, the two tales pay tribute to the classic art form of storytelling. Both are well-executed and sure to send at least a few tingles up your spine.

The art of storytelling may have changed somewhat over the centuries, but the basic premise is still alive and well.

Also in the cast are Nate Dendy, Dereks Thomas, and Henry Kelemen.