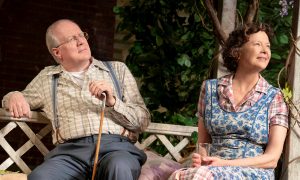 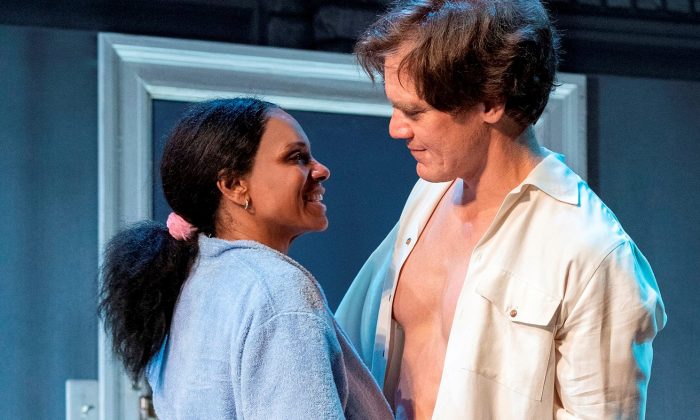 Theater Review: ‘Frankie and Johnny in the Clair de Lune’

NEW YORK—Who knew there could be so much chemistry between two people brushing their teeth?

A fascinating look at the possibilities that love has to offer (but only if one is prepared to seize the opportunity) is now offered in the simply wonderful Broadway revival of Terrence McNally’s 1987 play, “Frankie and Johnny in the Clair de Lune,” now at the Broadhurst Theatre.

A short-order cook in New York City, Johnny (Michael Shannon) is a relatively recent staff addition at the restaurant where Frankie (Audra McDonald) works as a waitress. After several weeks of growing interest between the two, Johnny asks her out.

The date ends at Frankie’s one-room apartment amid some intense passion, and then Johnny announces that he’s ready to begin a life with her—one which includes marriage, children, and everything that comes with it.

Frankie, on the other hand, while hopeful for a second date, has absolutely no intention of considering anything further at this point.

Johnny is nothing if not persistent. His single-minded determination takes the commitment-wary Frankie completely off guard when he refuses to leave her apartment, despite her insistence.

Yet Johnny’s efforts, which include verbal comebacks and unexpectedly romantic gestures, slowly allow Frankie to realize that her own feelings for him are far deeper than she first thought—especially after an overture that involves the “most beautiful music ever written.”

A not always gentle look at the idea of finding love in the most unexpected of places, “Frankie and Johnny” also points out the dangers of getting to a place in life where one is unable to let one’s guard down with anyone. In an especially interesting twist, it slowly becomes obvious that these two people have far more in common than they first realized—from where they were born and went to school to each having suffered through failed relationships. Of course, even for those meant to be together, a question debated for most of the play, the path to true love never runs smooth.

McNally very smartly flips the action in the second act; so while Johnny was the one going after what he wants when the play begins, it is Frankie who takes control of the narrative after intermission. Her own wants and needs—which include having a Western omelet—force the multisyllabic, Shakespeare-quoting Johnny to not merely put her on a pedestal but also be prepared to share everything with her on equal terms.

McDonald is superb as Frankie. A woman who has carried around a lot of pain for a long time, she finds that she simply can’t dismiss Johnny just because it would be the easier thing to do. The actress presents Frankie as a woman slowly coming to believe in not only the possibility of falling in love, but also realizing that it is OK to let someone take care of you from time to time. She leaves no doubt that she will demand just as much from Johnny as he seeks from her.

Shannon is perfect as Johnny. A somewhat brusque fellow, with both a dictionary and a copy of Shakespeare in his locker at work, he is determined to stick with what he is sure is the best thing that’s ever happened to him. Neither is he about to let Frankie walk away—at least not without a fight. As he says at one point, “My life was happening to me. Now I’m going to make it happen.”

In lesser hands, Johnny’s actions early on might be seen as somewhat creepy today. Fortunately, McDonald’s and Shannon’s performances, combined with the completely flawless direction of Arin Arbus, quickly erase any such possibility. We have no doubt about Johnny’s motives.

The production works on every level. The creative team works seamlessly to bring the story and characters brilliantly to life. Riccardo Hernandez’s set of Frankie’s one-room apartment offers a nice lived-in look, while the efforts of lighting designer Natasha Katz and sound designer Nevin Steinberg add subtle but important depth to the story. Also deserving of mention is the work of intimacy and fight director Claire Warden.

“Frankie and Johnny in the Clair de Lune” (the last part of the title, a reference to a piece of music by composer Claude Debussy) is a touching tale of two lonely people who have a chance to become something more. If you don’t make plans to see this show and find out just what happens on their journey, you’ll miss something very special.