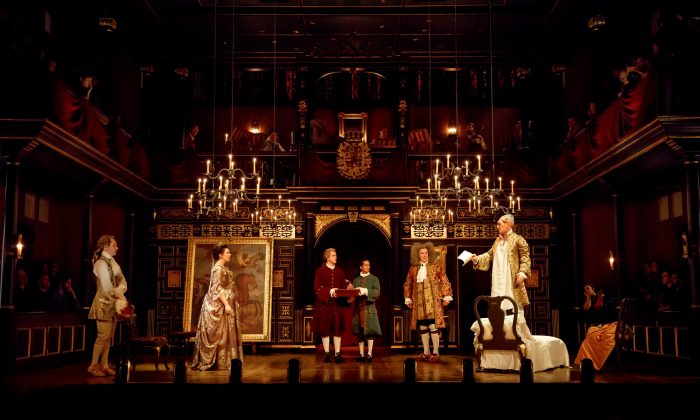 Theater Review: ‘Farinelli and the King’

Song that restores the soul
By Judd Hollander
Print

NEW YORK—Claire Van Kampen examines the healing power of song in her very absorbing work “Farinelli and the King.” Based on actual events and originally presented in London in 2015, the play is now making its North American debut at the Belasco Theatre on Broadway.

In Madrid, in 1737, King Philippe V of Spain (Mark Rylance) is suffering from a mental illness, causing his mind to wander and making him prone to emotional outbursts as well as bouts of depression. As Philippe’s inability to govern becomes more apparent, the officials in his court led by Chief Minister Don Sebastian De La Cuadra (Edward Peel) begin taking steps to remove him from the throne.

Philippe’s only ally is his wife, Isabella (Melody Grove). Fiercely devoted and protective of her husband, she has been doing all she can to make sure he is seen only in the best possible light. Yet her attempts to shield Philippe from the outside world can only go so far. Forced to leave court by those who want the king declared incompetent, she travels to London, where she attends a concert by the renowned Italian castrato singer Carlo Farinelli (Sam Crane).

Moved beyond measure by his beautiful singing and instinctively knowing he can help her ailing husband, Isabella implores Farinelli to come to Spain to sing for the king. Farinelli, who has continually felt smothered by the demands of fame, agrees to accompany her.

Upon hearing Farinelli’s singing, the king indeed shows signs of improvement, though any significant recovery will be a long, slow process. It will also require that Farinelli be constantly at the king’s side.

Farinelli, however, has multiple commitments elsewhere. Plus, even when the king seems better, he shows little interest in his day-to-day responsibilities. Matters become further complicated when Farinelli and Isabella find themselves having feelings for each other.

There’s a reason the play is called “Farinelli and the King,” for a while it is Philippe whose mental imbalance is kept in check through Farinelli’s singing, it is through his singing to the king that Farinelli truly hears his own music for the first time. He had been forced to embark on his career as a young man to please his family. Even now, after untold performances and the love of multitudes, Farinelli has never found as much satisfaction and sense of self-worth as when singing to his audience of one. It is this deep and almost symbiotic relationship between the two men that forms the core of the play. Each man is healed by the other in the way he needs it most.

Crane makes a wonderful Farinelli. The character grows from a disenchanted object of adoration to someone who not only learns the true value of his talent but is also able to put it into perspective with other aspects of his life.

It actually takes two people to bring the character of Farinelli to life on stage. Crane handles the acting duties, while Iestyn Davies delivers a superlative performance in the singing department. Davies’s performances hush the audience and bring a few tears to the eyes by the time each piece ends.

Rylance does a fine job as Philippe. His seemingly amusing actions in the beginning, such as fishing in a goldfish bowl, grow more poignant as time goes on—especially when his mental clarity returns and we see him struggle to hold on to his sanity.

Since the playwright focuses on only this one particular element in the king’s life and adds little backstory to develop a well-rounded a character, he remains somewhat of a cipher. Even so, Rylance portrays the king’s afflictions effectively, as well as his abject fear of continuing as king without Farinelli’s presence.

Grove is very good as Isabella. Her character can best be described as a benign Lady Macbeth. Quite intelligent, she is not above out-maneuvering those who stand in her way, but there is never any doubt as to her motives or where her loyalty is pledged.

Peel does well with the part of De La Cuadra, the closest thing to a villain in the piece, and Colin Hurley nicely provides some comic relief as London theater manager John Rich. (Simon Jones will soon replace Hurley, who was only available for a limited run).

Designer Jonathan Fensom has done a wonderful job with the sets, giving them the pomp and regal atmosphere of a Spanish court. His use of candles is an especially nice touch.

John Dove directs the work with a sure hand, though the ending of the play comes off as somewhat choppy. Though all the important information is supplied, the show would have benefited from a bit more fleshing out of the text, particularly in the final scenes.

A thought-provoking work on the power of song and how it affects both the afflicted and the healer, “Farinelli and the King” makes for an interesting tale.

Also in the cast are Huss Garbiya, Lucas Hall, and James Hall.