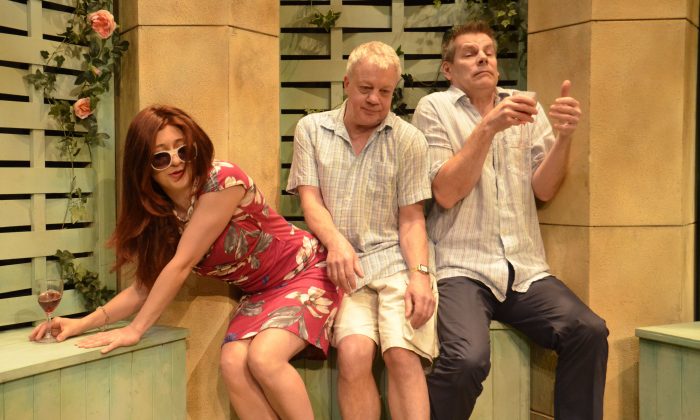 NEW YORK—Sometimes there’s no deeper message in a play other than to make people laugh, as Alan Ayckbourn demonstrates in his absolutely brilliant Farcicals. The two one-act comedies are now having their world premiere at 59E59 Theaters as part of the Brits Off Broadway Festival.

In Chloë With Love, Lottie (Sarah Stanley), a somewhat plain and staid woman, is certain her husband, Teddy (Bill Champion), is having an affair. She confides this to her longtime best friend, the worldlier Penny (Elizabeth Boag), shortly before Teddy and Penny’s husband, Reggie (Kim Wall), arrive to join them for dinner.

Penny, believing Lottie has let the spice go out of her marriage, convinces her to dress up as Chloë, a sensual, nonexistent old school chum, in order to reawaken Teddy’s interest in her.

Teddy, it turns out, has not actually had an affair, but, as he confides to Reggie, is definitely thinking about it. Not wanting to stray, he begs Reggie to keep him on the straight and narrow. With all four people working at cross-purposes, it’s not long before things get out of hand.

Teddy alternatively tries to get closer to and further from Chloë. The disguised Lottie gets too much into the role and comes on to her husband in the most outrageous ways as Reggie continually tries to get in between them in an attempt to defuse the situation. Penny, in the meantime, can only look on helplessly as her well-intentioned plan falls completely and hilariously apart.

Lottie has the same marital concerns in the The Kidderminster Affair, only this time Teddy actually is sleeping with someone else, and that person turns out to be Penny.

The assignation takes place in the town of Kidderminster where Penny was seen sneaking into a hotel. This information gets back to Reggie, but Penny explains it away.

However, when Reggie tells Teddy of the situation while the four are preparing for a barbeque, one misunderstanding leads to another. As multiple attempts to cover up the facts keep tripping everyone up, it’s only a matter of time before the truth is plain—at least to some of those present.

Simple plots and situations both, operating more on miscommunications than one-liners, Ayckbourn hits comedy gold here. Not only is this reflected in his writing, but also in his direction of both stories, each executed with absolutely flawless comic timing.

This is especially important in Chloë, which is more of a physical comedy, with Reggie, a sort of well-meaning dullard, continually inserting himself into the flow of things and trying to do the right thing for all the wrong reasons.

Kidderminster is more of a verbal affair, with quick reactions abounding. Teddy and Penny try to keep their own lies straight, but neither has the time to explain them to the other. Reggie tries to do what he can to help everyone, when in actuality, he’s only making things worse.

Most importantly, Ayckbourn has the actors play their roles perfectly straight, so the humor comes from the situations themselves, ones which are quite serious to the characters in both of the shows presented.

In a nice touch, Ayckbourn tosses in a few caustic comments about men, marriage, cooking, and barbequing—the latter a running gag.

The four actors, all of whom have excellent chemistry with one another, come across perfectly in the various roles.

Boag is great fun as Penny, the smartest of the four. Usually a step ahead of everyone else in figuring out what’s going on, she is still not able to salvage the situation even as she sees it spiraling out of control.

Wall is perfect as Reggie, Penny’s lovingly earnest, but perpetually dense husband. His well-meaning efforts to help his friends in need go completely and hilariously wrong.

Stanley is good as Lottie, a woman who projects the feeling of being a doormat, but in both stories ultimately allows her inner self and strength to show through. One still gets the feeling her ultimate situation will never really change—nor will those of any of the other characters for that matter.

Champion is fine as the oftentimes bumbling, somewhat sincere Teddy. He’s a person who, like his wife, allows things to happen to him rather than being able to control them himself.

The show program describes Farcicals as “two frivolous short comedies of fun, infidelity, food fights, lust, and loss of trousers.” Throw in opportunities to nod in rueful agreement, roar with laughter, and partake in wonderful theatergoing from start to finish, and you have a pretty good description of what you’re about to experience.