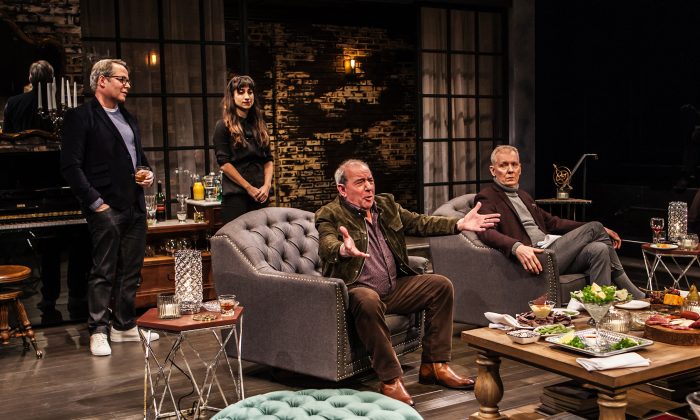 NEW YORK—The most insidious societal changes don’t occur through quick or violent means. Rather they are so quiet and unobtrusive one never notices them until it is too late. This chilling point is brought home in Wallace Shawn’s “Evening at the Talk House,” presented by The Group at the Pershing Square Signature Center.

On the 10th anniversary of the opening of his play “Midnight in a Clearing With Moon and Stars,” Robert (Matthew Broderick) and several of the cast and crew have gathered for a reunion at the Talk House, a once-popular club catering to artists.

Nowadays, however, the Talk House has fallen on hard times. The old crowd is all but gone, and many at the reunion have not been there for years. Robert, in fact, was surprised it still existed. That the place is still open at all is due entirely to the determination of the club’s manager, Nellie (Jill Eikenberry).

The fall from grace of Talk House mirrors the state of the theater industry. The art form is now practically nonexistent. The rather depressing offerings have helped to put off a public that seems to be more concerned with feeling happy.

Robert, who hasn’t written a play since “Midnight,” has gone on to write for television, now the prevalent form of entertainment. He currently works on a show featuring Tom (Larry Pine), the leading man of “Midnight” who, like so many others, left the Talk House behind for the allure of “ridiculously expensive, flashier places.”

As the evening progresses, it becomes clear that the seemingly congenial setting is actually a window into a society where it’s advisable to not look too deeply. Tom is the classic example: He accepts what’s going on in the world, such as a government-sanctioned murder program, but doesn’t want to know the nuts and bolts of the practice.

Among those who have been involved in this murderous line of work are Annette (Claudia Shear), a former costume designer-turned-private tailor, and Ted (John Epperson), a one-time composer. Meanwhile, Jane (Annapurna Sriram), a frustrated actress who recently returned to her old job at the Talk House, did a stint as a professional assassin, one of those charged with carrying out the decisions made by people like Annette and Ted.

The revelations about the trio’s recent work lead to a discussion about ethics, with a vocal opponent found in producer-turned-talent agent Bill (Michael Tucker). The most chilling moment occurs when Annette says that half of the people Bill knows have worked for the program. This begs the question: How does she know so much about Bill and his friends?

Shawn wisely refrains from setting the play in any particular time or place, allowing the audience to draw their own conclusions as to when and where the story might be happening.

The cast is excellent. Broderick opens the show with a wonderful 10-minute monologue that sets the story. Pine is good as a sort of denier-in-chief, while Eikenberry is stalwart as a person who sees the Talk House as a link to a time that is rapidly disappearing and far better than the uncertain present.

Turning in a stirring performance is Shawn as Dick, a has-been, second-rate actor, who may have outlived his usefulness and is thus approaching the point where he can be considered expendable. This point is never spelled out per se, but there are more than enough hints.

Scott Elliot’s direction is nicely restrained, allowing the power of the text to take hold and turn a simple premise into something sinister. Derek McLane’s set perfectly captures the quiet feeling of a club from a bygone era. A particularly nice touch is that the audience is allowed to mingle with the cast onstage before the show begins. This adds to the initially relaxed atmosphere before it’s slowly stripped away.

The final lesson is that a simple act of kindness can be the most dangerous act of all. “Evening at the Talk House” offers a sobering reminder of how much the tenor of a place can change, and how, unless society reacts very quickly, it can be too late to reverse the trend.