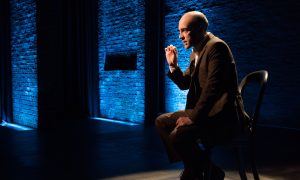 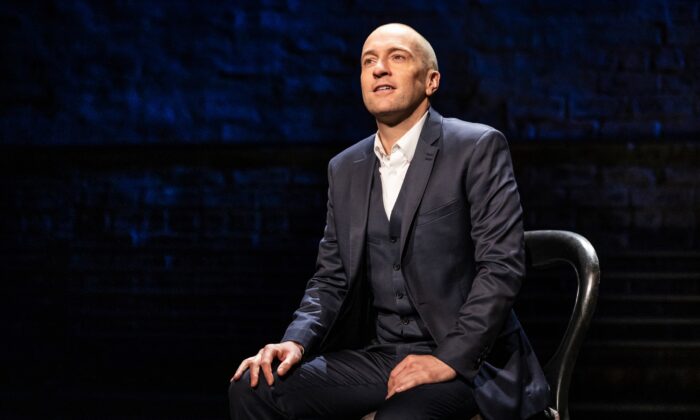 Where the impossible and the whimsical meet
By Judd Hollander

NEW YORK—Any good magician can confound his or her audience. But orchestrating things so those attending are nothing less than completely delighted at being completely fooled is an added plus. Such is the case with Derren Brown’s “Secret,” a wonderfully entertaining offering of the unexpected, currently setting up shop at the Cort Theatre on Broadway.

An expert in the field of psychological manipulation, Brown is also an excellent student of human nature. Specifically, he’s able to pick up on the tics, movements, and tension people give off when they’re trying not to reveal anything—from the way shoulders might unconsciously droop in response to a question to the manner in which they might grip an object in their hands, or why they choose to hold the object in one hand instead of the other in the first place!

It’s this information, born from years of experience, which Brown uses to draw his audience into the performance. All the while, he’s putting forth a series of variables that seemingly have nothing to do with one another, but all of which combine to bring each segment presented to a totally engrossing conclusion.

Genial and somewhat imposing, Brown comes off not so much as a man of mystery, but rather as a sort of self-deprecating figure one might meet at a neighborhood bar or happen to sit next to on a train. His amiability quickly puts those watching at ease as events unfold. And Brown is never condescending or cruel to any of the volunteers he brings up on stage.

While certain moments may not end the way Brown hopes—or so he makes them appear—he is still able to turn any fumble into another unexpected surprise, as the audience tries to puzzle out exactly just what happened and how they could have missed what was coming.

On a personal note, I saw an earlier version of this show Off-Broadway at the Atlantic Theater Company in 2017. And even when taking into account what I saw back then, I was still completely taken in.

It would be wrong to reveal too much about what occurs during a performance—something Brown specifically asks those present not to do. The fewer expectations one arrives with, the better.

It can be safely noted that Brown spins a wonderful tale about a major influence in his youth that spurred his interest into the unknowable. A banana also plays a pivotal role in the show, as do various colored Frisbees. As to what exactly the show’s title refers to, that will be explained, eventually.

Despite the performance’s rather long running time, I’m hard-pressed to find any place where the show feels padded with extraneous effects or repetitive presentations. Each of the bits are intricately plotted, with the attention to detail yielding something far more satisfying than simply making something disappear before the audience’s eyes or pulling a rabbit out of a hat. The payoffs at the end of each segment are all worth the wait.

As Brown points out early on, we are all alone. Each of us is locked in our own separate head. It’s Brown’s ability to get into other people’s heads via observation and suggestion that makes the performance nothing less than delightful, even as he pulls the proverbial rug out from under his audience time and time again.

He is completely deserving of the standing ovation he receives at the end of the show. “Derren Brown: Secret” is one Broadway offering that you definitely do not want to miss!