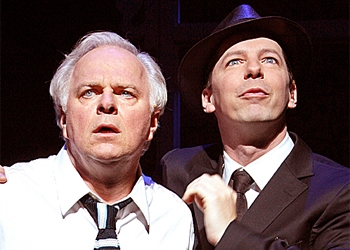 NEW YORK—For some summertime fun, one should definitely check out the devilishly delectable revival of the 1955 musical Damn Yankees. With words and music by Richard Adler and Jerry Ross, book by George Abbott and Douglass Wallop, and based on Wallop's novel The Year the Yankees Lost the Pennant, this is a story about good and evil, second chances, and ultimate redemption, all taking place against the backdrop of the game of baseball.

Joe Boyd, (P.J. Benjamin) a fifty-something out-of-shape insurance salesman living in Washington, D.C. has two passions in his life—his long-suffering wife, Meg (Randy Graff) and the Washington Senators, a perennially losing baseball team that hasn't won a pennant in years. So obsessed is Joe with the Senators that he thinks of nothing else during baseball season, much to his wife's dismay.

One hot July night, after watching his beloved team lose yet again, he angrily exclaims he'd sell his soul if it would help the Senators win. Moments later, there appears one Mr. Applegate, a.k.a. you-know-who (wonderfully played by Sean Hayes), offering Joe the chance to make his dreams come true—for a price; Joe agrees and is transformed into 24-year old Joe Hardy, (Cheyenne Jackson), who can hit a baseball like no one else in history.

Soon after, with Hardy now on the team, the Senators have become contenders and are battling the Yankees for the pennant (the musical takes place in the days before divisional playoffs). However Joe just wants to play ball and lead his team to victory. Instead he has to deal with endless questions from the press who want to know about his background—questions coming especially from a determined, acid-tongued reporter (Megan Lawrence).

If that's not enough, there's also Joe's deal with Applegate. Applegate’s constantly reminds him who's really in charge. Not to mention the fact Joe is sorely missing his wife—in an attempt to sway him from the path of true love, Applegate conjures up Lola, a femme fatale extraordinaire (Jane Krakowski), to show the sensual delights that can be had if Joe just gives in.

But while Joe's love for his wife may not be his Achilles heel, his ego just might be. With a scandal threatening to break around his Hardy persona, can Joe simply agree to vanish and return to his old life, leaving Hardy a figure of scorn and shame? And will Applegate let him walk away?

Despite its heavy themes, and indeed the novel is quite dark at points, the musical is played for fun and that's what one gets. Things are helped immeasurably by the overall atmosphere of the show, which brings forth an enjoyable mixture of drab reality and forbidden fantasies merging into one. This is especially true with John Lee Beatty's sets, ranging from the depressing and functional look of the Boyd's home, to the over the top décor of Applegate's lair. There's also a bit of crossover between the two worlds with portions of many of the sets painted red, a reminder of what's always lurking in the background.

There's also the wonderful score, which has easily stood the test of time. Some of the highlights include "Six Months Out of Every Year," a sort of baseball widows' lament, the comic/sultry "Whatever Lola Wants," the touching ballad "Goodbye Old Girl" and the enjoyable "Heart." (Good work by music director Rob Berman.)

Casting is excellent down the line. Jackson is wonderful as Hardy, playing the all-American boy with a touch of brooding. Benjamin is very good as Boyd, a man who at first feels he's wasted his life and has only his dreams left, but in the end realizes he has so much more. Krakowski is fine as Lola, one of the classic Broadway musical roles. More sexy than sensual and more style than seduction, she makes the part her own, turning this Lola into someone to both root for and be wary of.

Totally stealing the show is Hayes, here making his New York theatre debut as Applegate. A combination of smarminess and mystery, he expertly adds numerous comic touches to the role, making the character wonderfully endearing. Where else would the ultimate evil worry about costume changes or that Hardy's singing will wake the neighbors.

Other standouts include Lawrence as the reporter and Graff as Boyd's wife.