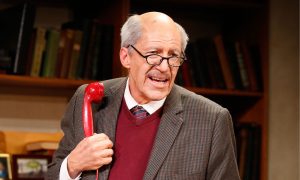 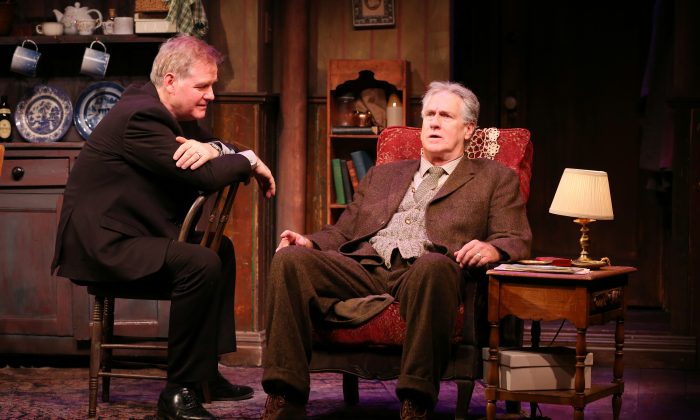 NEW YORK—Coming to terms with the past is not always easy, as playwright Hugh Leonard shows in his stirring, but sometimes unsatisfying play “Da,” presented by The Irish Repertory Theatre.

Charlie (Ciaran O’Reilly), a middle-aged man, has returned to his hometown of Dublin following the death of his father, or “Da” (Paul O’Brien). The pair’s relationship had been strained for decades.

Da continually gave his opinions and offers of help, even when clearly not wanted. These efforts ranged from trying to refresh his son’s cup of tea to his worldview on Hitler and revelations on Charlie’s parentage.

O’Brien does an excellent job in showing Da to be a wonderfully multilayered individual.

Charlie was adopted from an orphanage when he was 10 days old by Da’s late wife (Fiana Toibin). The circumstance of his birth was something that haunted Young Charlie (Adam Petherbridge) deeply.

Any hope Charlie has of walking away from his past is stymied by the fact that Da’s ghost refuses to fade away, instead following Charlie around as if nothing has changed. While this all may be happening in Charlie’s head, as Charlie insists, there is seemingly nothing he can do to make his father leave.

With “Da,” Leonard presents an interesting take on the memory play. The adult Charlie is an impassioned participant, who interacts and converses with figures from his past, particularly his younger self. He also comments on past events with the benefit of hindsight.

The serious, introverted, and somber soul Charlie once was, is a complete opposite of his more gregarious father—someone Charlie became more ashamed of as he grew older.

The high point of the play is the title character. Da preferred to glide through life whenever possible, even if it meant letting people take advantage of him. Hardworking and perennially happy, Da always made it a point to look for the best in everyone.

This trait is particularly evident when Da interrupts Young Charlie from having a tryst with “The Yellow Peril” (Nicola Murphy). She’s a local girl with an “easy” reputation whom Young Charlie hopes will relieve him of his virginity. With a few sentences, Da is able to tear down the girl’s facade and reveal her to be a flesh and blood woman named Mary Tate, much to his son’s dismay.

Leonard has created a strong character here and O’Brien does an excellent job in showing Da to be a wonderfully multilayered individual.

The main problem in the play is the character of Charlie, who’s too much a cipher at times to identify with. The audience learns little of what happened to him since he left home. We know he’s a married writer with one child. We know little else—other than he was secretly relieved when his father refused to live with him during the last years of his life.

Thus, Charlie doesn’t come across sympathetically, and without our being able to care about him, the character never really hits home, and the play tilts perhaps too far in Da’s favor.

Whether this is the fault of O’Reilly or director Charlotte Moore is unclear. Though O’Reilly is particularly effective when taking on the persona of Charlie as a child, at a time when Charlie worshiped his father as a hero, he’s never able to bring the present day character alive in the same manner.

Toibin does very well as Charlie’s mother, with an interesting story of how she happened to marry Charlie’s Da in the first place. Part peacemaker, part guiding hand, she doesn’t let anyone pull the wool over her eyes.

Petherbridge perfectly embodies Young Charlie, wonderfully showing the awkwardness and exuberance of youth, as well as the feeling that one has all the time in the world to get ready for life.

John Keating is interesting as Charlie’s childhood friend. An awkward meeting between the two as adults, with neither having much to say to the other, speaks volumes.

Sean Gormley is very good as Drumm, a man with standards few people live up to and who hires Young Charlie as a clerk in his business.

Murphy is excellent in her very brief stage time as Mary, and one wishes this character could have been explored more fully.

Kristin Griffith works well as Mrs. Prynne, an employer of Da’s, and whose interaction with him proves once again the kind of man Da ultimately is.

Moore’s overall direction is fine; the show moves seamlessly from one point in time to the next. Yet one never really feels completely drawn into the story, but rather as if watching it all from a distance as a passive observer.

James Morgan’s set of Charlie’s former home is cozy. Lighting by Michael Gottlieb is good, and costumes by Linda Fisher fit the time, place, and social status of the people who wore them.

An interesting tale of a father-son relationship, there’s a lot to like in “Da,” particularly with O’Brien’s sterling performance, but one can’t shake the feeling the production is lacking in certain key areas.