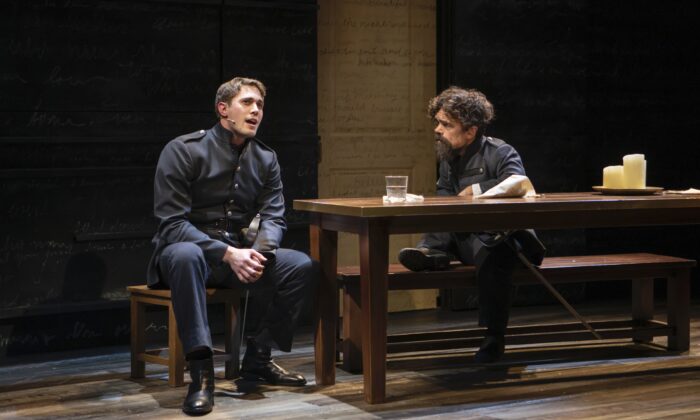 NEW YORK—When the character of Roxanne (Jasmine Cephas Jones) bursts into song in the opening moments of the musical “Cyrano,” something magical happens: A woman shares her hidden hopes and dreams. Here, the music and lyrics in this New Group production are perfectly in sync with the story. Sadly, such emotional highs are far too infrequent but do show the potential of Erica Schmidt’s adaptation of Edmond Rostand’s classic work “Cyrano de Bergerac.”

In 1640, Cyrano (Peter Dinklage) is a much respected swordsman in the king’s regiment. He’s also a poet, critic, and a man with a rapier wit. He once interrupted an actor on stage because he felt the performer was not up to the role.

Cyrano is also perennially without funds. He spends his money for reasons he considers just, rather than for practical items like food and clothes. He also refuses any aid—financial or otherwise—from his friends. Cyrano sees any such offer as charity, something his pride would never allow him to accept.

Cyrano is also desperately in love with Roxanne, his close friend from childhood, with whom he has recently renewed an acquaintance. Yet for all his bravery, Cyrano has never told her his feelings for fear that she will reject him because of the way he looks.

Interestingly, in the original story, the reason for Cyrano’s feeling of inadequacy is because of an oversized nose. Schmidt’s adaptation removes this characteristic and pretty much all references to it—a fact that might upset purists but one that also opens up the character to new interpretations.

Cyrano’s hesitation has opened the door for someone else to enter Roxanne’s heart: a young man named Christian (Blake Jenner), newly assigned to Cyrano’s regiment.

While Christian is just as enamored with Roxanne as she with him, he finds himself tongue-tied whenever he tries to speak to her. Phrases of love and poetry that fall so trippingly off Cyrano’s tongue and through his pen are impossible for Christian to express. Yet so great is Cyrano’s love for Roxanne that he willingly gives his written declarations to Christian. The new recruit thus is able to woo the object of his desire by passing off Cyrano’s words as his own.

“Cyrano” presents an age-old tale of unrequited love. Romantic illusions are only a temporary salve for those who attempt to stave off a reality they don’t want to face. This premise, along with a warning of the dangers pride can bring, is evident throughout.

When the songs (by Aaron Dessner and Bryce Dessner and lyrics by Matt Berninger and Carin Besser) allow the characters to reveal their inner thoughts, the show hits a proverbial home run. The scene in a pastry shop where Cyrano is writing a letter, while a group of workers knead bread in the background, is particularly striking, as is a scene where forlorn Christian explains his inability to articulate what is in his heart. His inability to speak from the heart is somewhat ironic, as Cyrano has the same problem, albeit from a different root cause.

Also quite good is a number sung by the soldiers in Cyrano’s regiment as they go into battle.

The only place where this method doesn’t really work is a solo number by De Guiche (Ritchie Coster), the de facto villain of the piece, who also has eyes for Roxanne.

Schmidt, who also directs the production, stages these scenes quite well, with the choreography by Jeff and Rick Kuperman—much of it in slow motion—fitting in perfectly.

However, when songs are used simply to impart basic plot points, the action grinds to a halt. The numbers then elongate moments that could have been easily handled by a few lines of dialogue. This matter is a particular problem in the early part of the play.

Dinklage is excellent as the alternately arrogant and lovelorn Cyrano, whose exploits eventually earn him the grudging admiration of his enemies, even as his pride becomes his undoing. He also cuts a dashing figure when his bravado is on display.

Jenner does very well as Christian, a tragic figure in his own right. He has just as much capacity for passion as Cyrano, but due to his upbringing (his father feels that books have no place in the life of a soldier) lacks the wherewithal to verbalize it. Christian is also the character who matures the most during the play.

Jones is fine as Roxanne. She is a character both willful and determined, yet also has a blind spot in matters of the heart. She does eventually realize that the beauty inside someone is far more important than what can be seen on the surface.

Schmidt’s adaptation stays faithful to the emotional core of the Rostand story, while allowing these characters to express their hidden passions on a completely different level. Despite being too uneven musically to succeed, it still rings true as often as not.