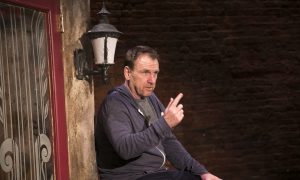 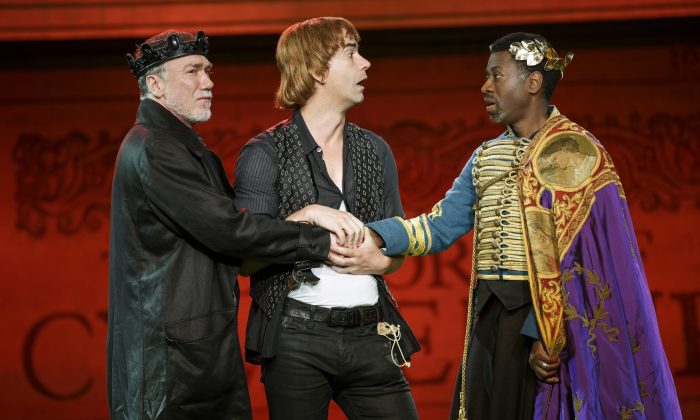 Forsooth, this play is fun!
By Judd Hollander
biggersmaller
Print

NEW YORK—Comedy and drama are often presented as both sides of the same coin, and indeed, some instances can be terribly painful in one aspect and terribly funny in another. The Public Theater’s absolutely brilliant production of William Shakespeare’s “Cymbeline,” now at the Delacorte Theater in Central Park, makes this clear.

Usually played more or less as a straight drama (as was the case with the last Broadway revival in 2007), this production goes a much lighter route. The Bard’s outlandish plot seems even more so, while the serious elements of the show remain intact.

Thanks to Daniel Sullivan’s very strong directorial work and a top-notch cast of nine, many of whom play multiple roles, the show combines royal gravitas with 1960s Las Vegas, expository speeches with audience participation, cross-dressing women with invading Romans, and an attempted palace coup with a reunion of long-lost siblings.

In ancient Britain (when it was part of the Holy Roman Empire), King Cymbeline (Patrick Page) is enraged when his daughter Imogen (Lily Rabe), next in line for the throne, marries the commoner Posthumus (Hamish Linklater). Imogen’s only other royal sibling is her half-brother, the perennially befuddled Cloten (Linklater). Cloten is the child of Cymbeline’s current queen (Kate Burton) and her former husband.

When Posthumus is banished, he flees to Rome where he encounters Iachimo (Raúl Esparza, who does a wonderful turn as a lounge singer,  channeling Frank Sinatra). When Posthumus praises Imogen and her virtuous nature as one unequaled in all the world, Iachimo wagers that not only will he seduce her, but will also return with enough evidence to prove her infidelity.

As this storyline plays out, Britain finds itself about to go to war with the Roman Empire over its refusal to pay Rome an annual tribute. These separate plot lines come together through a series of coincidences that can only be called Shakespearean.

Running throughout the story is a warning of the dangers that come from making a “rush to judgment.” From Posthumus’s denunciation of Imogen to Cymbeline’s condemnation of Belarius (Burton), a former lord in his court, this theme is ever present.

The parties who act on this information believing it to be true pay a heavy price when it turns out to be false. The same fate befalls those who quite willingly pass the supposedly factual information along.

There’s also chiding of the male sex in the story. Men take turns “trash-talking” their women, trying to seduce other men’s wives, or being so blind they cannot see the duplicity going on in front of their eyes.

Even Guiderius (David Furr) and Aviragus (Jacob Ming-Trent), two young men raised from infancy by Belarius and long-lost sons of Cymbeline, rail against their quiet lives. Yet neither has had the chance to feel the sting of battle or the wholesale letting of blood.

It’s the expression of these themes, both in comedy and drama, that make the play work so well. The righteous rage of Posthumus and the anguish Imogen feels at points are delivered both powerfully and poignantly.

Linklater plays Cloten—would-be suitor of Imogen and would-be instigator of a war with Rome—as a complete laughingstock.

At the same time, Linklater plays Cloten—would-be suitor of Imogen and would-be instigator of a war with Rome—as a complete laughingstock; every movement, word, and gesture make the character look completely idiotic. Highlights include Cloten trying to draw a sword or trying to write a song for Imogen.

Burton also does well in the double-duty department, portraying the outwardly proper, inwardly scheming queen in one moment while giving a salt-of-the-earth quality to the steadfast Belarius the next.

Elsewhere, Esparza does a wonderful turn as a rogue who perhaps goes just a bit too far in order to assuage his own ego. He also does well with the musical bits, as several enjoyable moments are incorporated into the story.

Page is stalwart as both Cymbeline and Philario, Posthumus’s host in Rome.

The fight direction by Rick Sordelet and Christian Kelly-Sordelet, to both comedic and dramatic effect, is superb.

The rest of the cast work well, and the fight direction by Rick Sordelet and Christian Kelly-Sordelet, to both comedic and dramatic effect, is superb.

It helps that the show never really goes too far over the top, although some of the Cloten bits—including one sequence straight out of a Bugs Bunny cartoon—come pretty close.

According to the show’s program notes, scholars have counted a total of 27 revelations in the final scene of “Cymbeline.” It’s a number I would be hard pressed to dispute, having had too much fun watching the proceedings to keep count.

Also in the cast is Teagle F. Bougere.

Judd Hollander is the New York correspondent for the London paper The Stage.