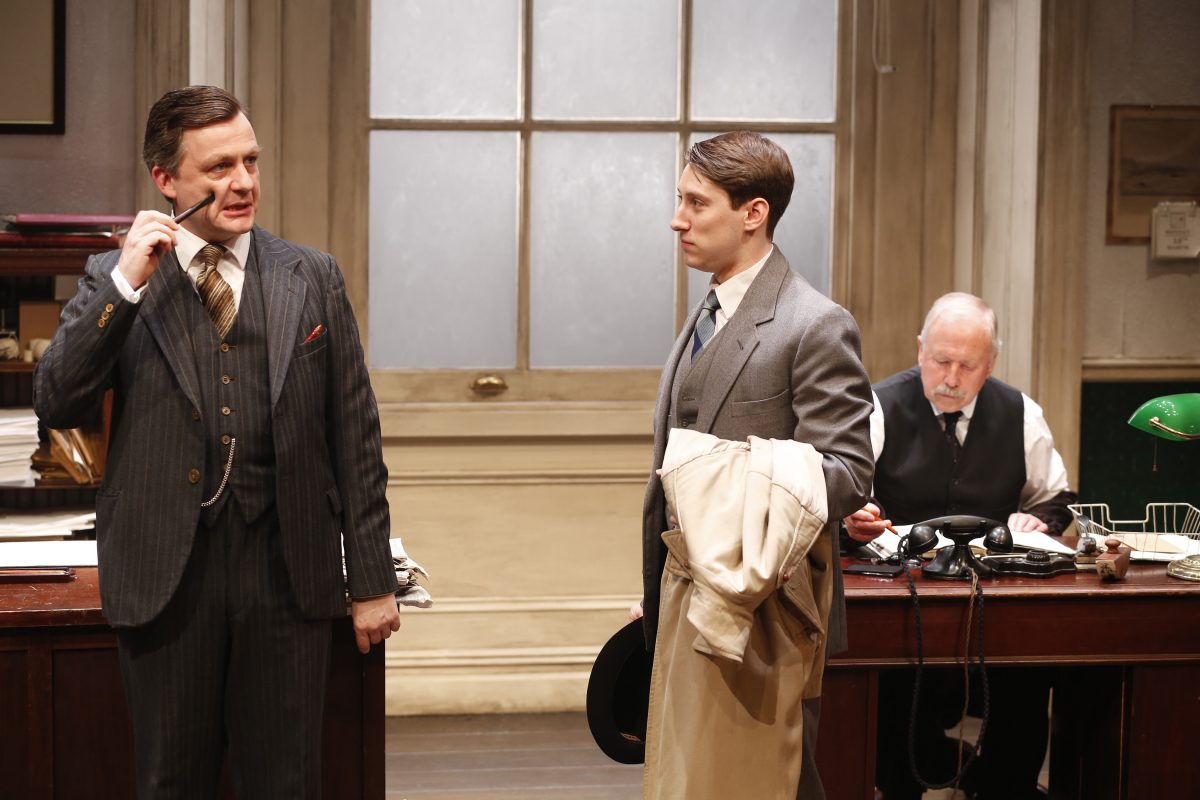 NEW YORK—Does one judge a person by what they’ve done in life or what they haven’t done? This is the question posed by J.B. Priestley in his 1935 work Cornelius, now at 59E59 Theaters as part of their Brits Off Broadway Festival.

The once prosperous aluminum import firm of Briggs & Murrison has fallen on hard times. The recent collapse of the British pound, coupled with restrictions due to a potential war in Europe, has put the company on a very tenuous financial footing, forcing the firm’s founder Robert Murrison (Jamie Newall) to depart on an extended trip in an effort to drum up new business.

With Murrison away, the day-to-day running of things has fallen to Mr. Cornelius (Alan Cox), a widower in his late 40s and a genial authority figure. The job has become one of continual crisis management as he waits for Murrison to return with good news, Murrison being a friend and colleague in whom he has unshakeable faith.

Written nearly 80 years ago, “Cornelius” is quite timely today as it looks at various individuals faced with having their lives suddenly upended. Some, like Biddle (Col Farrell), an elderly clerk; Lawrence (David Ellis), a 19-year-old messenger boy; and Judy (Emily Barber), a recently hired secretary, have the next step in their lives already planned out.

Others, such as Miss Porrin (Pandora Colin), a 30-something woman who’s become old before her time and who is secretly in love with Cornelius, are more at their wits’ end.

As for Cornelius, he’s secretly an armchair adventurer, currently reading a book about the lost city of the Incas, while dreaming of possibilities he’s never dared to undertake himself.

Also rather telling is the desperation on the faces of the numerous salesmen who come into the office trying to get Cornelius to buy something the firm doesn’t need. They need to make commissions and put food on their own tables.

Of interest here is the dynamic Priestley sets up with the various ages of the characters Biddle, Cornelius, and Lawrence. These fellows represent the choices open to one at various stages of life, with Cornelius caught in the middle. Cornelius uses Murrison and Judy—like Biddle and Lawrence, two people both older and younger than he—to try to help him in his time of need.

Cox does great work as the title character, a man trying not only to save the company, but also struggling to figure out what he wants in life. This task is complicated by his continual habit of playing it safe when it comes to personal matters.

Farrell gives off a comfortable feeling of familiarity as Biddle, one of those endless cogs in the business machine who does his job year in and year out.

Ellis is fine as Lawrence, a young man wanting to strike out on his own, and Colin projects an intriguing image of Miss Porrin, a loyal employee and a woman of repressed emotions. Her attitude toward Judy, whom she sees as a romantic threat, is sadly amusing, and her one serious attempt to break out of her shell is both realistic and heartbreaking.

As Judy, the newcomer to the firm, Barber nicely serves as a sort of stand-in for the audience. She learns the office routine and gets to know the various characters and their relationships at the same time as those watching the events play out on stage.

Newall offers a stark portrayal of Murrison, a man who has the weight of the world on his shoulders; and Beverley Klein does a nice turn as Mrs. Roberts, the cleaning woman. She has long since accepted her station in life and will be there long after everyone else has gone.

Direction by Sam Yates is quite good, never allowing the story to feel anything like a museum piece. Indeed, with only a few changes, the play could easily be set in the present day in any small or large business in any country in the world.