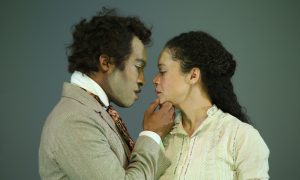 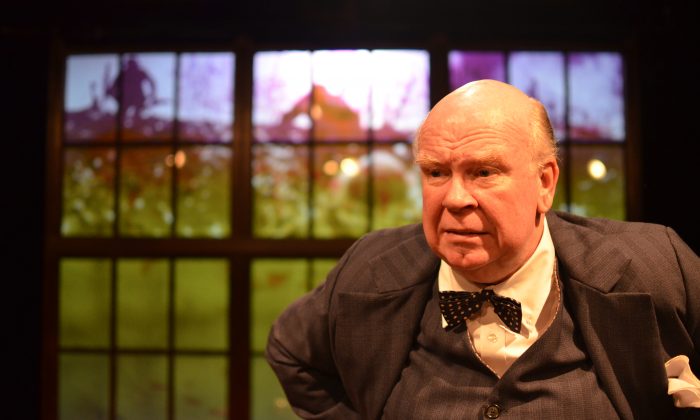 This production highlights that Churchill’s (Ronald Keaton) greatest asset was his ability to keep bouncing back, no matter the circumstances. (Jason Epperson)
Arts & Culture

NEW YORK—Ronald Keaton does an outstanding job of bringing the title character to life in the one-man show “Churchill,” now at New World Stages. A fascinating individual, Churchill experienced a great many highs and lows during his life, with his greatest asset being his ability to keep bouncing back, no matter the circumstances.

The play was adapted and performed by Keaton, based on the life and words of Winston S. Churchill and the teleplay “Winston Churchill” by Dr. James C. Humes.

Shortly after World War II, the now former Prime Minister of Great Britain has traveled to the United States at the invitation of President Truman to speak at Westminster College in Fulton, Mo. Using the speech as a sort of anchor to which it keeps returning, the play looks back on Churchill’s life and accomplishments.

Keaton does a very good turn as Churchill.
Keaton and director Kurt Johns avoid the “first this happened, then this happened” trap that bedevil many biographical pieces by making the character so completely interesting. Eschewing the bowler hat, cigar, and Victory symbol Churchill is so identified with—though these bits are there—the story instead focuses on the man rather than the image.

More importantly, Keaton makes the character seem both genial and guarded. He’s kind of like an uncle one has often heard about but seldom seen, with an air of both wisdom and experience that he is eager to impart, but only when he is ready to do so.

Born to relative privilege, Churchill’s father was a British statesman and his mother was an American. American women in British society, as Churchill explains, were looked down on at the time.

Churchill also notes he was never close to his father and always struggled to please him, thinking he probably had “maybe five” conversations with the man during his life. Also, since his dad passed away at age 45, the elder Churchill never got to see what his son achieved.

As a young man, Churchill saw his career options limited to “the land, the law, the church, or the military.” Picking the latter, Churchill served in India and the Sudan while putting pen to paper about his various exploits before finally turning to politics.

Churchill was someone who could see all sides of the political spectrum, even though he would at times violently disagree with the opposition. He was originally a conservative, later jumping to the Labor Party, only to eventually switch back.

This talent of changing perspectives would serve him well when, at a time when he was out of politics, he was summoned by the King of England and asked to form a new government as the ominous clouds of World War II began to form. This technique is also visible when despite his extreme disdain for communism, Churchill demonstrates his absolute willingness to do whatever he can to help the Russians in order to ensure they enter World War II on the side of Britain.

The play looks back on Churchill’s life and accomplishments.
Another good aspect of the play is the bits of historical trivia sprinkled in throughout. For example, Churchill played a major role in the development of the armored tank in World War I. He claimed this accomplishment helped to end “trench warfare.”

Churchill also helped popularize the phrase “iron curtain,” which became part of the world’s lexicon in reference to the division of Europe following the end of the World War II.

The play also looks at Churchill’s fondness for painting, playing cards, and the value he placed on his wife’s help in times of crises. A letter she wrote him when he was in the process of getting Britain ready for World War II is both pointed and humorous.

If there’s any shortcoming in the play, it has to do with the way it ends—without even hinting of yet another Churchill rebirth when he was re-elected prime minister of Britain in 1951.

Theater Review: ‘An Octoroon’
Keaton does a very good turn as Churchill. The character comes off more humorous than droll and more than a bit of a rapscallion at times, especially in his military days.

Perhaps the most defining aspect of Churchill presented here is his continual refusal to ignore the reality of events around him and his anger at those he calls “appeasers,” particularly those who tried to negotiate a peace with the Nazis, such as British Prime Minister Neville Chamberlain and Soviet Union Premier Joseph Stalin.

Keaton is helped by Johns’s very strong direction, which keeps the action moving from one place and time to another and allows Churchill’s commentary and actions to provide a running through line for the show.

Lighting and scenic design by Jason Epperson is fine, and patriotic when called for, and sound design by Eric Backus works well.

A strong tale about a very influential historical figure, “Churchill” makes for both an enjoyable and illuminating experience.

Judd Hollander is the New York correspondent for the London paper The Stage.