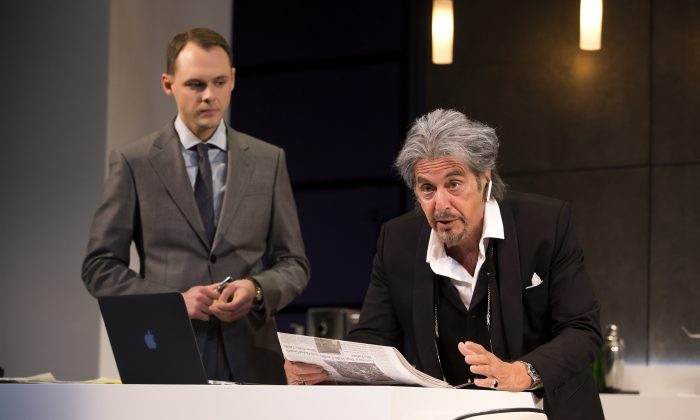 When the right move is everything
By Judd Hollander

NEW YORK—A cornered foe, particularly an elderly one, can be quite dangerous, especially when all he wants is to be left alone. David Mamet brilliantly taps into this scenario in his insightful and quite relevant play “China Doll,” starring Al Pacino at the Gerald Schoenfeld Theatre on Broadway.

Mickey Ross (Pacino) is an aging billionaire power broker. A well-known public figure, he’s had his hands in a number of political deals and elections throughout the years. Now in the twilight of life, he’s looking forward to retirement with his much younger fiancée.

He knows full well she is marrying him for his money and the material things he can offer. Ross is first and foremost a realist.

On the eve of his departure for this new life, Ross finds it’s not that simple to just pick up and leave. It is an election year, and he finds himself becoming an issue for a gubernatorial candidate out for payback. Ross did not endorse this candidate who now seeks to paint him as a figure of wealth, privilege, and one for whom the rules of law do not apply.

Caught in an attempted tax dodge (technically legal, but stretching the boundaries when it comes to ethics), Ross finds himself facing bureaucratic challenges on several fronts. Initially, he handles these problems with customary aplomb, combining quiet reason with veiled threats.

However, when he finds that his fiancée has been drawn into his scheme to the point she’s forced to hide in a hotel under an assumed name, Ross takes the gloves off and shows just how dangerous he can be.

This piece is certainly timely, particularly considering what’s going on in the American presidential race. Ross is almost a stand-in for a Donald Trump type—that is, a CEO of a major conglomerate who’s used to picking up the phone whenever he has a problem and talking to someone who can make it go away, or at least turn things in his favor.

Much of the play consists of one-sided phone conversations in an ever-changing game of verbal acrobatics as Ross tries to keep control of a situation slipping away from him.

Though watching Ross battle the various situations that try to take him down, one can’t help wondering if the seemingly simple incidents that started it all—the unexpected changing of a private airplane registration number and an instrument warning light occurring in flight—are really coincidental.

While Mamet is examining Ross’s unraveling, the playwright also takes gleeful potshots at the liberal hypocrisy of the aforementioned gubernatorial contender, a so-called man of the people. As Ross says, the closest he ever got to “the people” is when he saw them wash his car.

Nor do we the people escape Mamet’s aim. In still another comment about the political system, Ross points out that people are foolish and a lot of them vote.

Much has been made of Pacino not knowing his lines and supposedly relying on teleprompters hidden on stage, yet the actor gives a fantastic performance. Every pause he makes when delivering his dialogue comes off as carefully calculated before ramming home the next line or bit of business for maximum effect.

The actor plays Ross as an aging warrior, one brimming with scars of experience gained from a lifetime of brinkmanship. There’s even a Shakespearean reference tossed in, where Ross muses about an aging king. The ruler will not be able to rid himself of the numerous burdens he carries until he gives up the trappings of power. Though if he does, he will no longer be king.

Of the old school, Ross prizes loyalty—in contrast to younger generations, who seem more apt to bend whichever way the wind is blowing.

The younger generation here is represented by Ross’s assistant and right-hand man, Carson (Christopher Denham). Denham is very good as Carson. Part gofer, part yes man, quite knowledgeable and eager to learn, he’s someone Ross trusts implicitly. He’s privy to such knowledge as why Ross would receive a gift from a company he’s doing business with.

At the same time, Carson, while outwardly loyal to Ross, also takes care to look out for himself. He will not cross certain boundaries, such as sacrificing his legal deniability.

Seemingly simplistic, yet containing numerous layers, “China Doll” offers a hard look at someone who tries to walk away from the game he’s played for so long, only to learn those still playing are not yet ready to let him go.