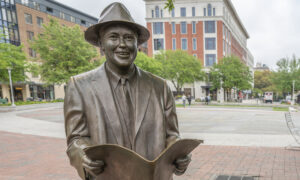 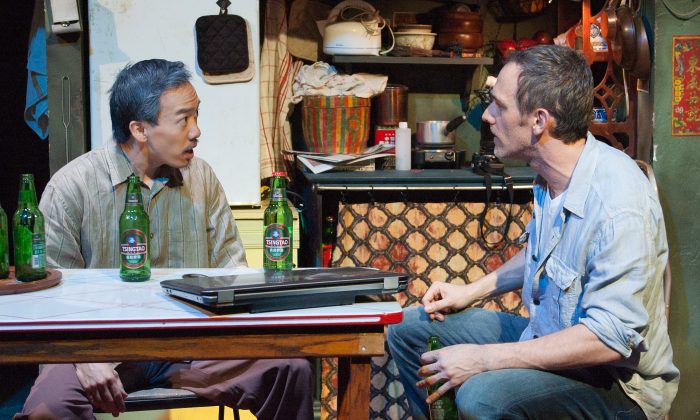 CHICAGO—While David Henry Hwang’s “Chinglish” amused us with misunderstandings between Chinese and American businesspeople, British playwright Lucy Kirkwood’s “Chimerica” has a different end in mind. For Americans, at least, she asks what we really stand for in relation to China.

We are reminded that the Chinese Communist Party (CCP) simply beats up, tortures, or kills anyone who challenges its authority or strays too far from its distortion of facts to maintain a facade.

It’s an election year in 2012 as American businesses eye the fiscal cliff, worry about the insurmountable debt to China, and reach desperate fingers across the globe toward the Middle Kingdom’s 1.3 billion buyers.

With this, we are reminded too that U.S. corporate interests seduce some with money and encourage others to become, from the Chinese perspective, “car-slaves,” house-slaves,” or  economic slaves to our children.

But Kirkwood’s point is that the effect the interdependent behemoths have on its citizens in the early 21st century is looking more and more alike. Both trample and squelch idealism.

It’s been 23 years, but feels much longer since fictional photojournalist Joe Schofield (Coburn Goss) snapped the iconic photo that epitomized the Tiananmen Square Massacre in the minds of the West: The one where the man in a white shirt, holding two bags, stands alone against a line of tanks.

Now Schofield is back in Beijing visiting his old friend, English teacher Zhang Lin (Norman Yap), and plying him with questions. Did he know who that hero, the tank man, was? Is he still alive? Does Zhang know his name?

These questions rouse painful memories for Zhang, who participated in the student protests with his young, pregnant wife (Janelle Villas) and witnessed the massacre. He’s been living in a squalid, tiny apartment ever since. He uses the TV to drown out the coughs of his dying neighbor and drinks a lot of beer, despite the nagging of his well-meaning brother, Zhang Wei (Wai Yim).

But Zhang relents and gives Schofield a possible name for the tank man and speculates that the hero, one of thousands from Zhang’s point of view, likely escaped to New York.

So Schofield, along with journalist Mel Stanwyck (Chris Rickett), begins a hunt for the tank man, who might very well have died decades before.

Photojournalism, Schofield believes, once marked each pivotal news event by imprinting startling images on our consciousness. But now, as we drown in social media, images of despotism, cruelty, and despair have been stripped of their strength.

China in 2012 has grown so fast to catch up with the developed world that anything that stands in its way—the environment, human beings, or the simple truth—are considered acceptable casualties.

Yet Schofield maintains the hope—a hope that few share—that finding tank man could uplift people. They might see him less as a hero—a term that seems outdated—and more as an ordinary survivor of an extraordinary event in history. But that’s okay. It could still give people hope, says the idealistic journalist.

Along the way in his crusade, we meet characters who show many changes in America since 1989. Frank Hadley (H.B. Ward), Schofield’s boss, a prototype of a hard-boiled, blustery newsman, has in the 21st century been reduced to editing for Life and Leisure. The U.S. press now caters to corporate interests rather than the truth, getting closer in its mission to that of the CCP’s press, long the Party’s handmaiden.

Representing the corporate worldview is Schofield’s on-again, off-again love interest, British Tessa Kendrick (Eleni Pappageorge), a marketing analyst. She sees the Western world in demographic terms and is intent on cataloging the Chinese in the same way.

Zhang’s world has undergone startling changes too. China in 2012 has grown so fast in order to catch up with the developed world that anything that stands in its way—the environment, human beings, or the simple truth—is considered an acceptable casualty.

Zhang knows better than to trust Party propaganda. Not only has he been stirred up by Schofield’s visit and memories from his past, he also watches his neighbor (Cheryl Hamada), once a poster girl for the Party, dying because of polluted air. These events lead him to undertake a spate of small-scale activism—a fervor of idealism dormant since his youth.

As we drown in social media, images of despotism, cruelty, and despair have been stripped of their strength.

As for Schofield, the once compassionate man gets so caught up in his mission that either his zealotry or a second shot at fame lead him to bribe, blackmail, or coerce others during his investigation. Moreover, he neglects to help Zhang back in China, still fighting the good fight.

Thus, two men undertake missions, in vastly different yet oppressive settings. And we see very different stakes for of them—a chilling outcome for one man and a morally disastrous one for the other.

The play presents an unspoken accusation against American self-interest—self-interest that amounts to an indifferent betrayal of China’s people of conscience.

In one telling scene, an American lawyer (Caron Buinis) calls her corporate client (Tom Hickey) to get him to sign off on an issue. It’s just standard protocol, a blip, and hardly worth mentioning—a courtesy to the Chinese, it’s called. She asks for the release of the identity of a Chinese citizen in whom the CCP has a special interest. This extended courtesy leads to an arrest and torture in China.

Director Nick Bowling keeps the nearly three hour performance spellbinding and relies on the dizzying projections by Mike Tutaj to take us back and forth across the world. Sound by André J. Pluess is compelling but overly loud.

Sterling performances all around, fortunately. From Buinis’s witty senator to Villas’s haunting portrayal of Zhang’s wife, the cast convinces us in each of the multiple roles they undertake.

Goss as Schofield maintains our compassion despite his irresponsible failings, and the journey by Yap’s Zhang breaks our hearts. Without excellent performances we could not concentrate on the issues at stake.

America’s betrayal through apathy is very much on trial here, just as much as the CCP’s willful twisting of fact and flesh. It invariably reminds us of Elie Wiesel’s warning that the greatest evil is indifference.