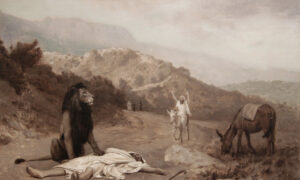 Theater Review: ‘Cabin in the Sky’

Well worth the trip
By Judd Hollander
Print

NEW YORK—Nothing less than a man’s soul hangs in the balance as Heaven and Hell square off in the Encores! presentation of the 1940 all-black musical “Cabin in the Sky” (music by Vernon Duke, lyrics by John Latouche, book by Lynn Root).

Somewhere in the deep South, “Little Joe” Jackson (Michael Potts), who drank, gambled and kept company with the rather fetching Georgia Brown (Carly Hughes), a woman who was not his wife, is on his deathbed due to wounds he received during a dice game. All the while, he’s being prayed over by his loyal wife, Petunia (LaChanze).

Happily watching the proceedings is The Head Man (Chuck Cooper), a.k.a. Satan, Jr., who is about to take Little Joes’s soul to Hell, when, The Lord’s General (Norm Lewis) intervenes.

Struck by the sincerity of Petunia’s prayers for the recovery of her husband, he grants Little Joe another six months on Earth, after which, if Little Joe turns his life around, he will be allowed to spend eternity in Heaven. However if he returns to his sinning ways, he will be given a seat on the “asbestos chariot” for a one-way trip below.

The catch to this offer is that once Little Joe returns to life, he will have no memory of this opportunity and so must find it in himself to change his ways.

At first Little Joe indeed seems on the path to redemption. He gives up the dice and drink, gets a steady job and goes to church. But The Head Man and his crew have other plans. For when temptation, both in the flesh and in the spirit, fails to sway the reformed sinner, planted doubts and suspicions just might be his ultimate undoing—along with the undoing of others.

The battle between good and evil is an age-old story, one dating from the time Adam was tempted to eat a certain fruit. And credit for that incident goes to The Head Man’s First Henchman (Dennis Stowe).

The show’s strong cast and very enjoyable score ensure that this premise more than holds the audience’s interest. Coupled with this is the show’s deeper message that even the most devout person can forsake righteous ways, while even the most confirmed sinner can choose to be reborn.

The show also makes the argument that the most dangerous of the seven deadly sins are pride and envy—lust not being far behind. While the most important aspect of redemption is the power of forgiveness and understanding, and the realization that none of us are perfect.

The interplay between The Head Man and The Lord’s General help matters along—the two dressed in red and white respectively—each manipulating in his own way as he tries to win over Little Joe.

Cooper does a very enjoyable turn with the comedic number “Little Papa Satan,” and Lewis more than holds his own with “The Man Upstairs” and “It’s Not So Bad to Be Good.”

Unfortunately, the book is rather dated, despite some doctoring of the script by the show’s director, Ruben Santiago-Hudson, and Jack Viertel, the Encores! artistic director. Although they removed such words as “pickaninny,” according to the program notes, the text retains a heavy handed and “aw shucks” feel at times, such as when Dude (Forrest McClendon) and John Henry (Harvy Blanks) try to temp Little Joe to return to his past ways.

Additionally, one of the scenes in the second act is rather uneven, part of it feeling almost tacked on, and it contains a rather sudden change in one of the character’s temperament. Not to mention the show’s final moments, which contain some elements that strain the credulity of the situation more than a little.

Fortunately, the characters are all interesting enough to allow the show to get through whatever structural problems it may have.

The score is wonderful. Two of the highlights are the spirituals “God’s Gonna Trouble the Water” and “Dry Bones.” The former is sung masterfully a cappella to open the show; and the latter, which could easily have become an object of parody, is used here instead as a vehicle of joyful celebration.

Other standouts include “Taking a Chance on Love,” which LaChanze delivers wonderfully to indicate the love Petunia has for her husband. The character is not as rigid or naive as one would initially think.

Also wonderful are the sensual “Honey in the Honeycomb,” delivered with the proper dash of sass by Hughes as Georgia Brown;  the comedic “Love Me Tomorrow,” where Little Joe tries to stay on the straight and narrow while fending off Georgia Brown’s advances; and the title tune.

Orchestrations by Jonathan Tunick are excellent and the choreographic work by Camille A. Brown, which includes several dream sequences, is also quite good.

“Cabin in the Sky” perfectly embodies the mission of Encores!, to introduce forgotten or overlooked musicals from the past to a new generation of theatergoers. Part curio piece, part moral lesson, all in all it makes for a very satisfying experience.

Judd Hollander is a member of the Drama Desk and a reviewer for Stagebuzz.com