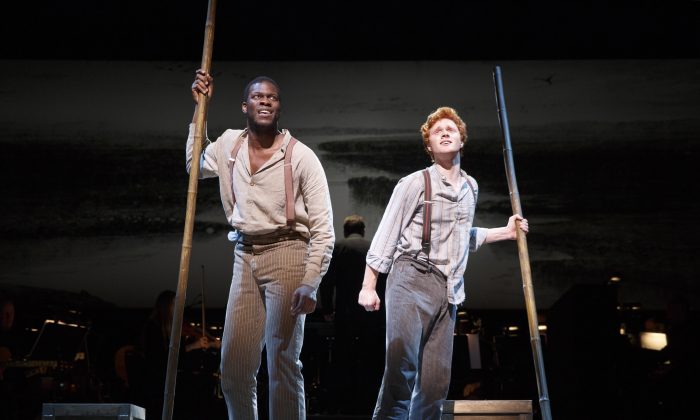 Right and wrong are very clear
By Judd Hollander

NEW YORK—”Human beings can be so cruel to each other” notes young Huckleberry Finn in Encores! revival of the 1985 Broadway musical “Big River.” Though as the story, which is set in the 1840s makes clear, people are most hurtful when societal blinders keep them from seeing how painful their actions can be.

In an attempt to escape his alcoholic father (Wayne Duvall), Huck (Nicholas Barasch), a free spirited ne’er-do-well if there ever was one, fakes his own death and high tails it out of St. Petersburg, Mo.

Shortly thereafter, he encounters Jim (Kyle Scatliffe), a runaway slave. Belonging to the god-fearing Widow Douglas (Cass Morgan), Jim fled upon learning plans were afoot to sell him to someone in New Orleans. The widow and her pious sister Miss Watson (Annie Golden) were also Huck’s legal guardians before Pap Finn returned to reassert his parental rights.

Jim plans to board a raft he had found, and take it down the Mississippi River to where it joins with the Ohio and from there travel north to the free states. His ultimate goal is to earn enough money to buy his wife and children.

Huck offers to go with Jim as he’s looking for a quick way out of town himself. He’s running from both his father and those who want to civilize him—teach him to read and write and make sure he goes to school and church. He also sees it as a great adventure.

What passes for adventure for Huck turns out to be quite different for Jim. When it’s just the two of them, they work fine as a team. But when they rescue the Duke (Christopher Sieber) and the King (David Pittu), two conmen fleeing an angry mob, Jim finds himself once more an outsider.

Twain’s novel has come under fire over the years, particularly with terms disrespecting blacks and its depiction of a society that almost wholeheartedly accepts the concept of slavery. “Big River” does not shy away from these.

Although Huck is the focus of “Big River,” it is Jim who serves as its moral center. William Hauptman’s book makes this point perfectly clear.

Scatliffe wonderfully bringing to life the hope Jim feels when he and Huck start their journey; as well as the pain he feels when his freedom and dignity are taken from him.

Yet at the same time, Jim never looses his pride or sense of purpose, no matter the situation. This attitude is reflected in the songs “Muddy Water” and “Free at Last,” both highlights of Roger Miller’s stirring score.

Conversely, it is the character of Huck who is by far the most interesting in that he is able to bring forth the mindset of a society who treated slaves as something less than human while never seeing anything wrong in doing so. At points Huck refers to slaves as property, has a low opinion of abolitionists, and struggles with his conscience in wondering if he should do the wrong thing and help Jim, rather than the right one and turn him in. The gap between Huck and Jim crystallized in the song “Worlds Apart.”

Particularly affecting is when Huck learns early on that Jim has a family and then later reacts with surprise when Jim mentions it again. Huck has forgotten all about them in the interim.

At the same time Huck is able to show Jim moments of great kindness, putting his own life in danger for him and also and giving him an equal share of money he received from two strangers (Stephen Lee Anderson, Tom Nelis) who crossed their path only to flee thanks to a lie Huck told.

Barasch, who perfectly embodies the character of Huck, does an excellent job of making this morally ambiguous individual both fascinating and likeable.

Sieber and Pittu do fine jobs as the Duke and the King. Sieber in particular, his character an actor by trade, hilariously mangles the words of Shakespeare in an attempted soliloquy. The two show that while they have nothing specifically against Jim, they nonetheless treat him as someone inferior.

Deceptively simple and totally compelling, “Big River” offers a strong lesson about people caught up in a painful moment in America’s past.