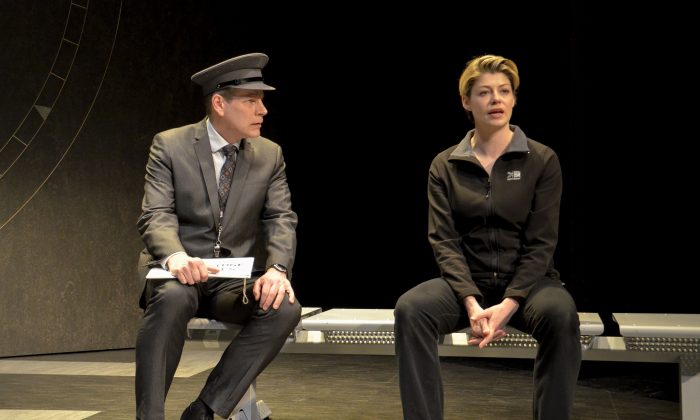 Quentin (Bill Champion) is the officer in charge of stopping a terrorist, and Ez (Elizabeth Boag) is an army officer whose career has seen better days in Alan Ayckbourn’s “Arrivals and Departures.” (Andrew Higgens)
Arts & Culture

A look at life under the surface
By Judd Hollander

NEW YORK—Life’s often not what it seems at first glance in Alan Ayckbourn’s Arrivals and Departures, which just closed at 59E59 Theaters. Ayckbourn, who also handled the directing chores, offered up a surprisingly intimate story of two people going to opposite extremes to keep a handle on the turmoil and hurt in their respective lives.

The story takes place in a London railway terminal where a SSDO (Strategic Simulated Distractions Operations) team is preparing to apprehend a notorious terrorist who’s arriving shortly on an approaching train. Although as Quentin (Bill Champion), the officer in charge, tries to get his people into position, the group ends up looking more like the Keystone Cops.

Also present is Barry (Kim Wall), an elderly civilian traffic officer and the one person who can identify said terrorist, having attempted to give him a traffic ticket sometime earlier. Assigned to keep Barry safe is Ez (Elizabeth Boag) a sullen Army officer, there on what she calls “babysitting detail.”

Formerly on the fast track in her career, Ez has been in a downward spiral of late, including her assaulting a fellow officer. That event will probably lead to her discharge from the service. Keeping her feelings tightly under wraps, her attitude is a marked contrast to the jovial Barry, who perpetually looks on the bright side of life.

As the two wait for events to unfold, Ez’s story is revealed via flashback: a relationship gone disastrously wrong, a clinging mother, and the loss of a beloved father in combat, an event which prompted Ez to follow in his footsteps.

After the loss of her dad, Ez never let anyone get close again, even the man she planned to marry. However much to her great surprise, Barry is able to slip through her defenses with his rambling comments and astute observations (who knew one could say so much about nothing yet still make it all so fascinating ), changing her attitude to one filled with levity and laughter.

These two people, who at first glance have absolutely nothing in common, respond to the other’s need for someone to talk to and for someone who listens.

Act 2 shifts to Barry’s back story, showing the hurt and betrayal he’s suffered in his life, much of it coming from the people he loved and trusted. Barry’s comments often say the opposite of what actually happened.

Yet as Ayckbourn continually makes clear, it’s how one deals with life’s punches that is important. Ez becomes bitter, resentful, and old before her time, while Barry is able to move on and forgive, always believing there is good in the world.

Boag was terrific as a woman with a perennial hair trigger personality and a fatalistic attitude about everything, who, through her interaction with Barry, begins to realize life is not as bad as she once thought.

Wall, meanwhile, did an absolutely brilliant job as Barry, making an initially annoying character interesting, endearing, and one you wouldn’t mind hanging out with, at least for a while.

James Powell and Rachel Caffrey were both very good as Barry and Ez’s younger selves. Their performances allowed the audience to better understand the characters and thus gain a respect and understanding of them.

Champion was fine as Quentin, a by-the-book official who was never quite able to control the situation he found himself in; his deadpan delivery provided much of the initial humor in the play.

Richard Stacey did well as Wisby, one of the members of Quentin’s team.

Ayckbourn’s writing and direction were quite good, taking characters who initially appeared one-dimensional and slowly opening them up to reveal the complicated person inside. He also kept the audience guessing in regard to just who the terrorist was, with a first act that ends with more questions than answers.

It’s a testament to the writing that while the second act covers much of the same ground in terms of what has already been said, albeit from an entirely different perspective, one never feels any hint of repetitiveness or padding in the narrative.

Jan Bee Brown’s design of the station’s waiting area was appropriately impersonal. Tigger Johnson’s lighting design, used to shift scenes from past to present, was quite good.

Alternatively funny and tragic, Arrivals and Departures, the title of which not only refers to trains, but also to people who come into and exit a person’s life, is a powerful piece about facing life on one’s own terms. Such terms should not blind one to the simple beauty that can be found in the most unexpected places.