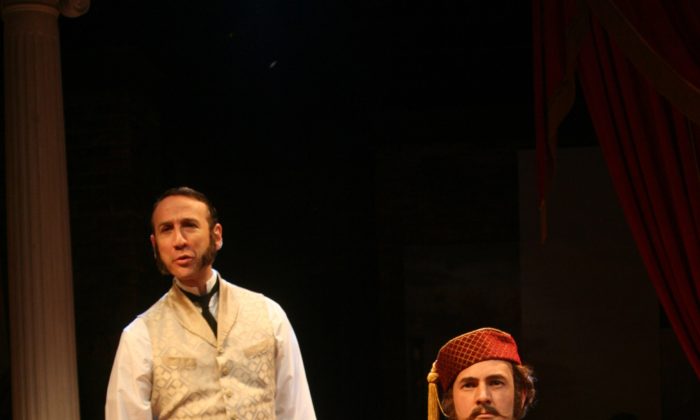 Theater Review: ‘Around the World in 80 Days’

Plenty of fun, but too faithful to its source

NEW YORK—There's a bit of a danger in being too faithful to your source material, as evidenced by the recent stage production of the Jules Verne novel Around the World in 80 Days, presented by New York's Irish Repertory Theatre in association with Cincinnati Playhouse in the Park. Written/adapted for the stage by Mark Brown, it's a production that tries mightily, but doesn't quite hit the bullseye.

In 1872 Victorian London, one Phileas Fogg (Daniel Stewart) is a man of science, particular habits and set schedules. (He dismissed his most recent manservant for having the temperature in his shaving water two degrees above what it was supposed to be.) With no known family or source of income, though he is quite wealthy, he spends his days at the Reform Club, one of the many gentlemen clubs of the era (and which numerous fiction writers enjoyed satirizing).

One evening at the club, Fogg and some of his companions are discussing the globalization of the world and how it has been estimated it is now possible to travel around the world in 80 days. Fogg wagers such a journey can be done and, with his new servant Passepartout (Evan Zes) in tow, sets off to win his bet.

The journey takes them from London to India, to Singapore, Hong Kong, San Francisco, New York and back to the starting point. Needless to say there are numerous obstacles along the way, such as missed travel connections, broken railway bridges, hostile Indians (in America), human sacrifice, a beautiful woman in peril named Aouda (Lauren Elise McCourt), and a detective named Fix (John Keating) who's hot on their trail, convinced Fogg is a master criminal who stole a fortune from the Bank of England.

Brown's presentation is very faithful to the original novel, too faithful in some cases. Much of Verne's narrative is left intact, with the various actors, many of whom play multiple roles, continually announcing what is happening and where, in effect telling the information instead of showing it to the audience and letting them find out at the same time as Fogg and company.

Additionally the production doesn't flesh out the characters as much at it should—neither did the book, but it relied on the adventurous tone to inspire the imagination, a facet lacking when you see the action on stage instead of in your mind. Here Fogg is stiff and one-dimensional, as are Aouda and Fix, with only Passepartout imbued with a feeling of life, albeit as a caricature. Zes is fun in the role, and all the other actors work hard, but it's not enough to make one care about them.

Also many of the characters are rather politically incorrect, ranging from funny to some rather negative stereotypes. One can get away with this if there's a good reason for it, but here it come across as laziness on the part of writer and director.

There are some enjoyable moments to be had, such as when the cast is swaying to indicate traveling by train, or the loud sound effects to demonstrate an elephant's steps as the group makes their way through India. Good use of sets and props (nice work by Joseph P. Tilford) make the different scenes flow smoothly. Costumes by David K. Mickelsen are fine and lighting by Betsy Adams and sound design by David Andrew Levy work well.

Michael Evan Haney's direction is uneven, staging the action scenes nicely, but the dialogue can be stilted at times and the endless narration blunts a production that really needs much more energy to take off.

Also in the cast is Jay Russell.