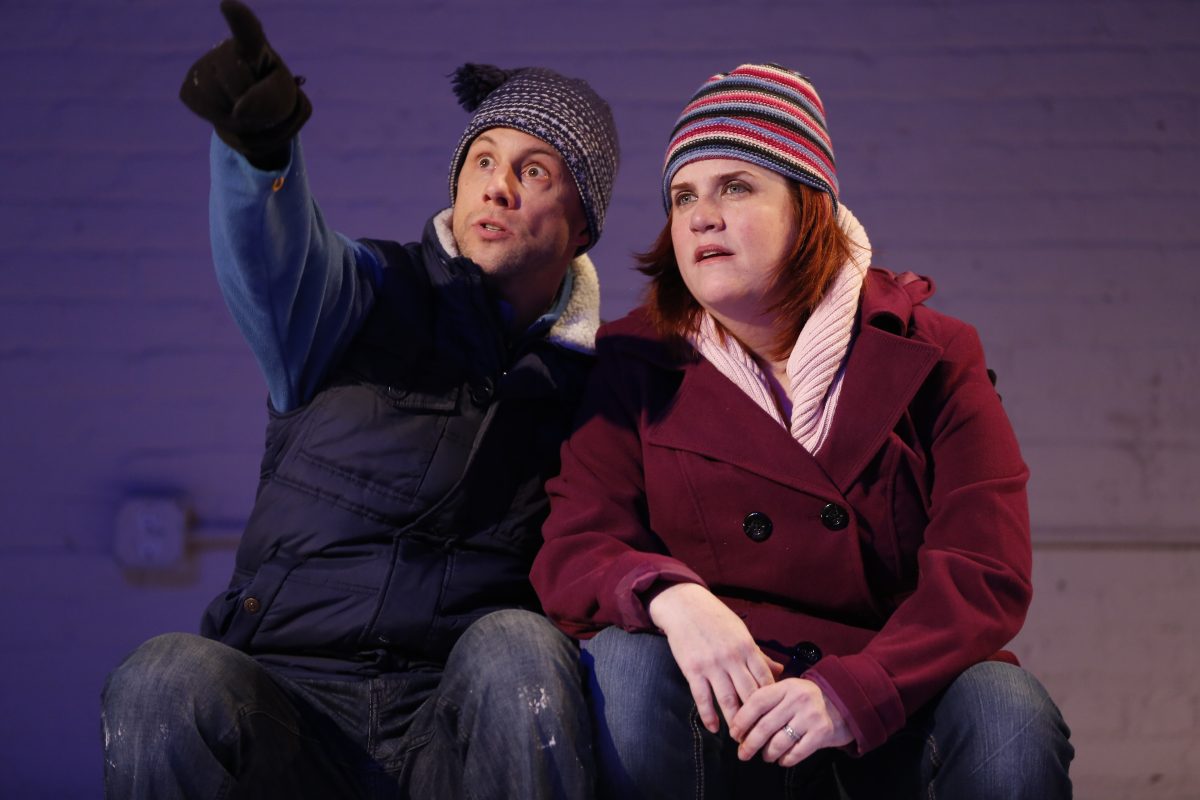 Kevin Isola and Donna Lynne Champlin in one of the vignettes about the magic and mystery that is love. (Carol Rosegg)
Arts & Culture

Don’t miss this one!
BY Judd Hollander TIMEFebruary 14, 2014 PRINT

NEW YORK—Guaranteed to warm the hearts of even the most cynical theatergoers, John Cariani’s Almost, Maine offers up a wonderful selection of vignettes about the magic and mystery that is love—with more than a bit of whimsy and a hint of “The Twilight Zone” thrown in.

The story takes place during a wintry Friday night in the locale of the title. Situated in the northern part of the state, Almost is not quite a town—they’re not organized enough for that.

But there’s no denying the feeling of community among the friends, co-workers, and strangers who help make up the population of the area. It’s also a place where the normal rules of the universe don’t always apply and where certain things are taken far more literally than usual.

Things start off quietly enough, with a man and woman (McAndrew, Cariani) sitting outside in the snow, awkwardly trying to think of things to say, when heretofore hidden feelings come bursting to the surface.

The sudden revelations are one of many ongoing themes that emerge throughout the production.

Other underlying messages explore how absence in any relationship can make the heart grow fonder, and how someone’s great love may have actually been right in front of them the whole time. At various points there are elements of wistfulness, regret, and slapstick.

Other stories presented include a woman (Champlin) trying to come to terms with the memory of her dead husband; a former resident (McAndrew), who once couldn’t wait to get away from Almost and who’s now desperate to get back; and neighbors (Champlin, Cariani) in an apartment building who start to bond, thanks to an ironing board.

Just as the show is about meetings and new beginnings, it’s also about endings, loss, regret, and  how it may be too late to fix things before the other shoe drops—in one case quite literally. It’s this mixture that keeps the show from feeling too much the same throughout, with each individual story feeling completely fresh and always involving.

While the various segments are pretty much stand-alone tales, there is some connection between them all via the different characters and places mentioned. This adds to the general feeling of community and togetherness the show projects.

The acting is wonderful down the line. Champlin shines in roles that allow her to bid farewell to one relationship and possibly begin another. She finds herself falling in love quite literally with her best friend and being offered a chance at a relationship when she had long since tried to push those feelings—with anyone—away.

McAndrew is quietly touching as a woman who travels far in order to be close to the person she loves, and in one of the most moving stories presented, realizes the different forms love can take when it’s placed in a very special package.

Isola does well as the quiet and stalwart type, often short on words but big on gestures and pregnant pauses. His soft air and presence have as much effect as the people around him carrying the exposition.

Cariani is fine in his various roles, offering a kind of blue-collar feel to his characters and making him, like the rest of the cast, both endearing and as welcoming as an old friend.

Guiding the actors throughout is Cummings’s very able direction, which allows none of the elements presented—no matter how strange—to feel out of place, strained, or awkward in any way.

The snowy scenic design by Sandra Goldmark, which the audience walks on as they enter the venue, is quite realistic and certainly adds to the sense of being in the place the story is set.

Lighting by R. Lee Kennedy is nicely subdued when called for, and the costumes by Kathryn Rohe are good—many of them coming into play in one of the latter stories.

Sound design by Walter Trarbach is fine, and original music by Tom Kochan fits in perfectly with everything else going on.

Almost, Maine is a wonderful collection of hopes, dreams, love, fresh starts, and for at least a few of the characters, coming home.