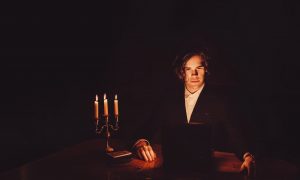 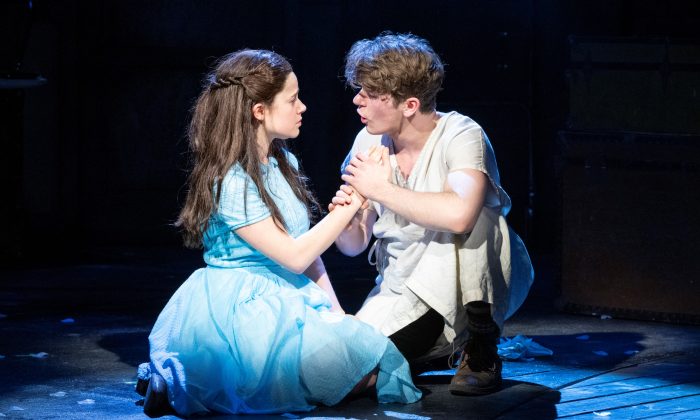 Falls too far down the rabbit hole
By Judd Hollander

NEW YORK—One of the greatest joys of fantasy is the escape it brings from the everyday world. But when flights of fancy become a desperate attempt to fend off reality, truth can appear in the most unexpected places. This is the underlying theme of the new Off-Broadway musical “Alice by Heart,” presented by the MCC Theater.

In 1941 London, during attacks by the German air force, teenage Alice Spencer (Molly Gordon), along with dozens of others, takes nightly shelter in an underground tube station. Their hiding place has been converted into a makeshift hospital and refugee camp, with inhabitants that include shell-shocked veterans, doctors, and nurses with no time for cheerfulness, and people wondering what, if anything, will await them when they emerge the next morning.

With pain and fear all around her, Alice’s only refuge is in the pages of her favorite storybook, Lewis Carroll’s “Alice in Wonderland.” Alice has read the work so many times, she intimately knows each scene and character.

On this particular night, Alice is shocked to learn that her dear friend Alfred (Colton Ryan), whom she has known from childhood, is dying from tuberculosis and has been moved to a quarantine ward. Refusing to let Alfred be taken from her, Alice makes her way to his bedside and transports him into Carroll’s tale, a place the two have visited many times before in happier days.

Once there, Alice attempts to stop the forward motion of the story to ensure the two will remain safely within its pages forever, untouched by events in the world beyond. (Alice’s attempts to straddle her past and present are also reflected in the fact that she is physically becoming a woman, a change that causes her to see Alfred in a new light.)

Yet, it’s not long before the characters in the novel begin to rebel against what Alice has been trying to do. Some accuse her of no longer caring about them. Others point out how she doesn’t belong in the story anymore, now that she is growing up.

With “Alice by Heart,” bookwriters Steven Sater and Jessie Nelson have set out to create a morality tale that shows, while you can’t hide in the memories of childhood forever, it is possible to take those experiences and use them to shape the future. Alice learns this herself as she bonds with others in the shelter as they wait for the bombs to stop falling.

Notwithstanding an insert in the show program that explains the different Lewis Carroll characters, the audience really needs to have a firm grasp of “Alice in Wonderland” to really appreciate this account.

What’s more, the elements of the musical don’t come together as cleanly as they should. Parts of the show feel rather rushed and uneven.

While the entire cast is enjoyable, with many other than Alice and Alfred playing multiple roles, none are particularly fleshed out, with the fantasy sequences in particular often failing to connect on an emotional level.

This fault turns out to be ironic, as it is in these make-believe sequences that Alice learns the lessons that prepare her for what she is trying to deny. It’s as if the show’s creative team invested so much in the framing sections of the story to get the audience ready for Alice’s journey, that they failed to give the journey the same weight.

Gordon is excellent as Alice, a girl who wants nothing more than to save the one person nearest and dearest to her. Her pain and hope provide an invitation for the audience to follow her on a voyage of self-discovery.

Ryan is fine as Alfred, at times a polar opposite of Alice: too deeply caught up in the reality of his situation to even consider an alternative.

Kim Blanck is fun as the mysterious Cheshire Cat, a creature with a long-lasting grin and couched words of wisdom for those who take the time to listen. She also works well as Tabatha, one of the people Alice interacts with in the tunnels.

Also striking a good note is Wesley Taylor as a wounded soldier.

The music by Duncan Sheik is enjoyable, if not memorable, though after a while it’s hard not to feel the sameness of it all. The music is not aided by the miked instruments, which,  at times, drown out Sater’s lyrics.

Jessie Nelson’s direction works nicely, especially in the more emotional early and final scenes. Edward Pierce’s set design, particularly that of the underground tube, is well done, as are the costumes by Paloma Young.

“Alice by Heart” is a story about the importance of remembering the past while not hiding away in it. Sadly, the production does not leap off the page, at least not yet.